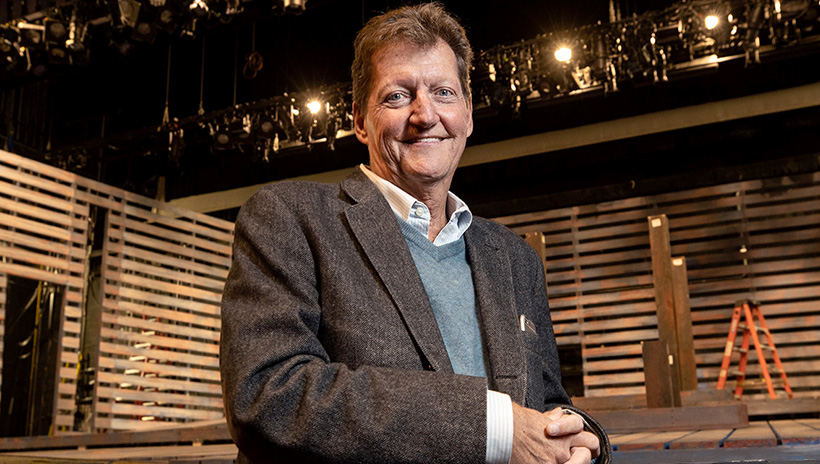 East Carolina University alumnus Howell Binkley earned a reputation on Broadway as the lighting master behind shows including "Jersey Boys," "In the Heights" and the blockbuster "Hamilton." But he was even more well known for his love of life.

"He had no limits on his imagination or enthusiasm. I think one of the reasons people were so drawn to him was his joie de vivre," said his wife, Joyce Storey. Binkley died of lung cancer in August 2020, at age 64.

His last work before he died was for "Fly," a play based on the tale of Peter Pan. It was fitting, Storey said, because Binkley walked through the world as if sprinkled with pixie dust — he brought a childlike joy to his work that was magical.

Now, ECU's School of Theatre and Dance has pieces of Binkley's magic on display in the form of his nine Tony nomination letters and posters from his Broadway plays. The posters are framed and hung in the hallway of McGinnis Theatre. The hallway has a red carpet lit by a double row of professional lights and a gobo (a partial screen used in front of a spotlight to project a shape) that was named after Binkley by Rosco Laboratories Incorporated. The Tony letters are hung in the school's Roulston Room.

"As an alumnus, Howell represents the talent that we have here and the tradition of excellence. We are extremely grateful for this generous donation and proud to house these precious documents that are a testament to Howell's success in the field," said Jayme Host, director of the School of Theatre and Dance.

Storey donated the documents as well as other trophies and memorabilia because she knew ECU would treasure them.

"It's so appropriate to Howell. He would be thrilled. He loved ECU," she said. "My greatest hope is that it will inspire students to strive to be all they can be. That they walk down that hallway and say, 'If he can do it, I can do it.'"

Binkley grew up in Winston-Salem, where he participated in both high school and community theater. He went to ECU to pursue a degree in architecture and got involved in the theater program. His mentors at ECU encouraged him to focus on a specific area of theater, and Binkley chose lighting. He studied at ECU until 1977 but left before graduating to work in New York.

His first Broadway show was "Kiss of the Spider Woman" in 1992, for which he earned his first Tony nomination. In total, Binkley designed lighting for 52 Broadway shows. He won Tony awards for "Jersey Boys," which opened in 2005, and "Hamilton" a decade later. In addition, he founded Parsons Dance Company with choreographer David Parsons that toured all over the world.

Before "Hamilton," he worked with the show's creator and star Lin-Manuel Miranda on "In the Heights," Miranda's Broadway debut, which recently adapted into a movie. In a New York Times story about Binkley's death, Miranda said, "There was no challenge Howell couldn't meet with light."

As he rose to prominence, Binkley stayed connected to ECU and returned to speak to theater classes. He created a mentorship program where a senior theater student from ECU could intern with him in New York.

"It was a passion of his to help the next generation," Storey said. She added that the Howell Binkley Fellowship Program will continue to be run by his associates in the industry.

His career success and desire to give back made Binkley a "titan of lighting design but an even bigger and better person," Host said. "He had a generous and youthful spirit. He made everyone feel special and important. He saw the world through a positive lens."

His letters and posters at ECU will serve to honor his work and contributions to the school and the field.

"I'd like to thank ECU and specifically Jayme Host for honoring his legacy," Storey said, "I made the gift, but under Jayme's leadership, it became something so much more special than I could have ever imagined. Seeing his items cherished in this way — I'm so grateful."
Go Back