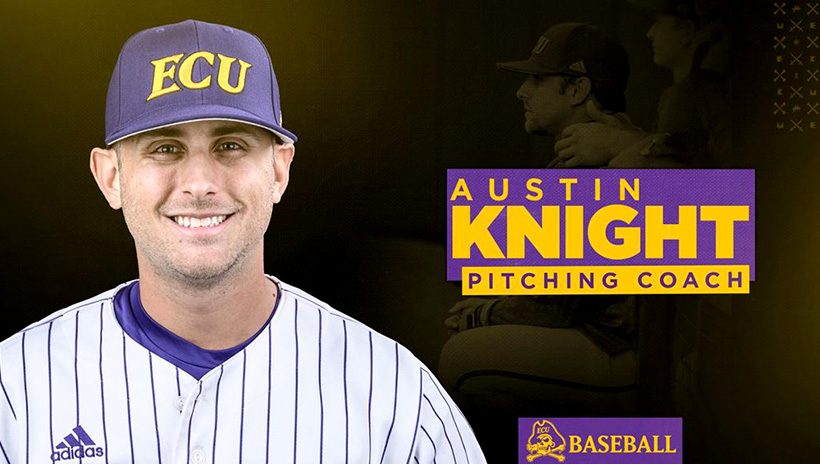 GREENVILLE, N.C.     Austin Knight has been officially named East Carolina's pitching coach according to an announcement by eighth-year head coach Cliff Godwin Wednesday afternoon. He will assume his new role immediately while continuing to serve as the Pirates' camp coordinator.

A four-year letterman at Ole Miss (2012-15), Knight worked alongside former ECU pitching and current Cal State Fullerton Head Coach Jason Dietrich helping the Pirates to a 44-17 overall record in 2021, the American Athletic Conference regular season title, NCAA Greenville Regional championship as the No. 13 National Seed and an appearance in the Nashville Super Regional.

"We are super excited about Austin taking over as our pitching coach," Godwin said. "He has worked tirelessly in assisting Coach Dietrich for the past two seasons and has been a huge part of the success we have had on the mound during that time. Austin is a rising star and we are pumped that he is our pitching coach."

"I am very excited about the opportunity Coach Godwin has presented me to lead the pitching staff," Knight said. "I have been fortunate to learn under many tremendous pitching coaches, most recently being Jason Dietrich. My goal as always is to develop tremendous relationships with these young men, and help them achieve their goals as baseball players and as men. I can't wait to take on this challenge with our staff and team."

"I'm very excited and happy for Austin to be named the new ECU pitching coach," Dietrich added. "AK was my right hand man for the last two years and during that time he was very instrumental in the development of the ECU pitchers. He is very detailed orientated, has a high baseball IQ and knows how to relate to the players. The ECU pitchers are in good hands and I'm excited to see AK work his magic next year. Go Pirates!"

"Austin is one of the most knowledgeable and trusted coaches I have ever worked with and been around," ECU All-American Gavin Williams said. "As a former catcher and working with Coach Dietrich the last two seasons, he knows a lot about pitching. AK is someone that is going to push you and help you tap into your fullest potential. I am excited to watch him lead the Pirates pitching staff for years to come."

Knight came to ECU after spending two years at Louisiana Tech as the volunteer assistant coach working primarily with the catchers, while serving as the Bulldogs camp coordinator and helping with baseball operations under head coach Lane Burroughs. During his two seasons, the Bulldogs posted a 73-44 record that included a pair of top three finishes in Conference USA (second in 2018). Knight's catchers allowed just 14 passed balls over two seasons and threw out 32 percent of would-be base stealers in 2018, which stood fourth in the league.

Prior to his stint at LA Tech, Knight spent two seasons as a graduate manager at the University of Arkansas Little Rock working under head coach Chris Curry. During that time with the Trojans, he worked with the catchers and assisted with all aspects of the program's recruiting and traveling.

While at Little Rock, Knight spent two summers as an assistant baseball coach for the Yarmouth-Dennis Red Sox of the Cape Cod Collegiate Baseball League tutoring some of the top young catchers in the country. Brent Diaz, a 2017 Johnny Bench Award finalist, not only saw an increase in power numbers but also saw his average rise nearly 60 points from 2016 to 2017. While in the Cape Cod League, Knight also coached Matt Whatley, a third-round pick by the Oakland A's and winner of the 2017 Johnny Bench Award. Overall, he worked with five catchers who were selected in the 2017 MLB Draft.

Before making the leap into coaching, Knight played collegiately at Ole Miss under head coach Mike Bianco where he helped the Rebels to a 153 wins, four NCAA Regionals and an appearance in the 2014 College World Series. With Godwin's tutelage, then an Ole Miss assistant coach, Knight appeared in over 120 games, was a two-time SEC Honor Roll selection and three-time scholar-athlete.

"Austin is part of our long legacy of great catchers and a member of our 2014 CWS team," Ole Miss Head Coach Mike Bianco added. "Now, he is a rising star in the coaching profession. I have no doubt that he will do a tremendous job with the ECU pitching staff and continue their development of great young pitchers."

WHAT THEY ARE SAYING ABOUT KNIGHT ...

"Austin was one of the first coaches to really sit down with me to help me learn and develop a third pitch in the Cape. He was knowledgeable and open-minded in the pitch development process, which helped us connect instantly. This gave me confidence to trust my stuff and pitch freely. I am excited to see him excel with this opportunity." — Kris Bubic, Kansas City Royals 40th overall pick in 2017 MLB Draft

"I am really excited for Austin Knight and the Pirate baseball program. Having the opportunity to work with Austin as part of our staff with the YD Red Sox in the Cape Cod League, I can tell you Austin is an endless worker with a wealth of knowledge. He will have an immediate impact in ECU Baseball program. The young man can teach and will make players better. Austin's promotion for the Pirates Baseball team will have a positive impact." — Scott "Pick" Pickler, Cape Cod Hall of Fame Coach
Go Back