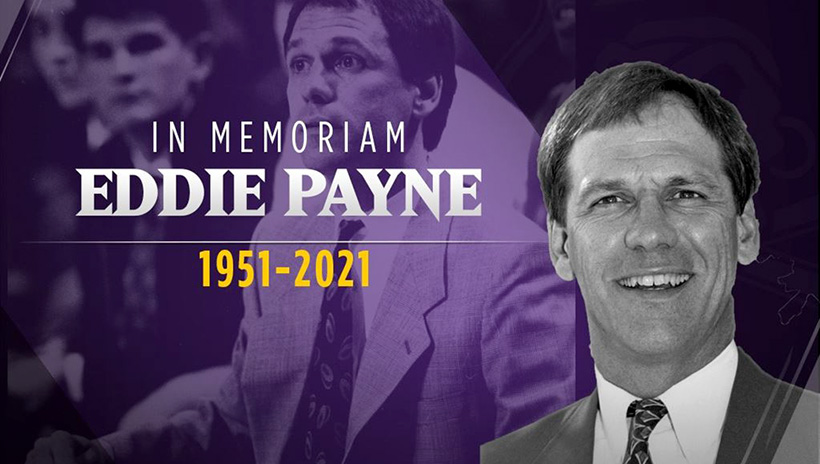 GREENVILLE, N.C.     East Carolina University and the entire Pirates athletic community mourn the loss of former ECU men's basketball coach Eddie Payne, who passed away early Wednesday. He would have been 70 on Saturday.

Payne directed the ECU program for four seasons, 1991–95, and led the Pirates to their lone Colonial Athletic Association title and last NCAA Tournament appearance in 1993. He mentored a trio of all-conference players and a foursome of all-rookie team performers while laying a foundation for future success. Payne's last two ECU squads were a combined 33-23 and he departed as the school's winningest Division I coach.

"I'm heartbroken to learn about the passing of Coach Payne," ECU Head Coach Joe Dooley said. "He was more than a mentor, he was friend. He taught me a lot about coaching on and off the court and gave me the opportunity to pursue my passion. He was a man of great faith and character, and I will always cherish the relationship we had both personally and professionally."

The Pirates went 20-5 inside Williams Arena at Minges Coliseum during his final two seasons, 1993-95, as he became the first East Carolina coach to post back-to-back winning campaigns in two decades.

"It is a very sad day with the news of Eddie Payne's passing," former ECU Director of Athletics Dave Hart said. "Eddie was one of the finest human beings I ever worked with over the course of my career. He was a really good basketball coach who exemplified all that should be truly important in intercollegiate athletics. My heart goes out to his family and those that he made better for knowing him."

Before taking the reigns of the ECU program, Payne was an assistant coach at South Carolina under head coach George Felton and alongside Dooley and Tubby Smith. Dooley followed Payne to ECU and coached under him all four seasons before being promoted to head coach once Payne accepted the head coaching job at Oregon State.

He then served as head coach at USC Upstate for 15 seasons where he helped the Spartans transition from Division II to Division I. Payne led them to back-to-back NCAA Division II tournament appearances in 2005 and 2006 before the Spartans made the move to DI in 2007.

Payne first arrived in Greenville in the summer of 1979 as an assistant coach to Dave Odom for two seasons which was followed by a five-year stint as the head coach at Belmont Abbey.

"College basketball and the ECU family have lost a great coach and even better man," "Voice of the Pirates" Jeff Charles said. "Eddie Payne was a wonderful human being who positively influenced hundreds of lives both on the court and in his everyday life. His Christian faith, wife Ann and son Luke were his top priorities. Our thoughts are with them."

An all-state player at Charlotte's East Mecklenburg High School, Payne graduated from Wake Forest University in 1973. He coached at all five levels of college basketball before announcing his retirement from USC Upstate prior to the 2017-18 season.
Go Back