Who is John Galt 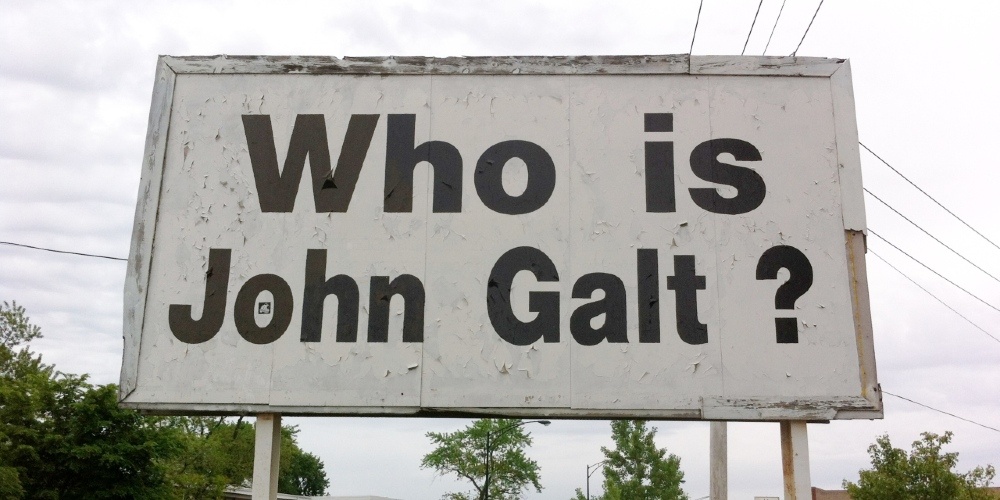 Let’s get the uncomfortable confession out of the way first. I’m not a fan of the storyline or writing of Ayn Rand’s libertarian tale, “Atlas Shrugged.” That doesn’t mean I don’t appreciate it. I recommend it to those who have a firm belief in the Bible; those who are lukewarm could fall under the eloquent spell of Rand’s anti-Christian beliefs. But the principles of individuality, personal responsibility, and the risks of big government are all spot on even if the storyline was contrived and oftentimes ludicrous.

As we move through these crazy times, we could actually use a little more ludicrous. There’s plenty to go around on the left while many if not most on the right are satisfied by “owning the libs” on social media posts. I’m not sorry if that offends you. We need more than just Tweets. We need action. We need a real world version of John Galt.

Those who have read “Atlas Shrugged” know exactly what I mean. For the rest, a brief and only partially accurate background. The character was the architect of a society of equal men and women who broke away from a deteriorating society to live in a libertarian utopia. They were as literally off-the-grid as possible; without spoiling too much, they were a grid of their own. This group valued the rights of the individual above all else and used a purist form of capitalism to essentially have a paradise that was free from responsibility for anyone else.

A real-world version of John Galt is impossible. But we do need someone, or to be more accurate we need many “someones” who will step up and truly expose the direction this nation is heading. And if these someones cannot change that direction, then they need to engineer an escape for freedom-loving people to have a safe haven from the hydra of mega-government that is forming around us.

Don’t get me wrong. I won’t be leaving society for a version of Galt’s Gulch any time soon. I will fight to the bitter end to save America from itself. But I know there are those who need an escape and I support that notion. Someone needs to be around to rebuild if we are not successful in keeping America from collapsing under the tremendous weight of Neo-Marxism,

Below is an article by Bruce Wilds over at Advancing Time that continues along the same theme.

We Are Entering The Age Of “Full John Galt”

We are entering the age of “Full John Galt.” This is a time where society and politicians are rapidly dismantling the rights of ownership. This transfer of rights constitutes a transfer of wealth whether we wish to call it by that name or not. This is a time when people can just walk into a small privately-owned convenience store, then, without paying walk out with an arm full of merchandise with little or no ramifications. This is a time when government deficits have lost all meaning and people are being paid not to work. This is a time when saying what you feel can garner you massive negative attention and ruin your life.

The idea the economy can be planned by a central force has yet to succeed anywhere. The failings and ills of such programs are rooted in the fact that central planning tends to produce enormous unintended malign effects owing to erroneous incentives and price signals. The new mechanisms of socialist control often created to guide the economy are generally not up to the task of maintaining control. In the old Soviet Union, for instance, nail factory managers got measured and rewarded by the tonnage produced. The story goes that one enterprising factory started massively exceeding its quota by producing only ten-ton nails.

A slew of news headlines give the impression we as a society are on the verge of becoming unhinged and totally dysfunctional. We, as a population have become polarized and poisoned by the decisive messages flowing from those with self-serving agendas. With governments and various agencies busy issuing mandates and ordering things like a halt on evictions while they lock down cities, it is difficult to argue this is business as usual. Big tech seems to be guiding much of what we see and even the government appears under its spell. Add to this the constant flow of propaganda from mainstream media and the drumbeats of war that are growing louder and it is easy to claim, we do indeed live in interesting times.

Recent headlines such as the condo collapse in Florida and hints that many other towers may also be in a precarious condition sends shivers down the spine of those living there. Signs of poor construction or architectural incompetence does little to comfort those that have invested their savings in these buildings. The financial ramifications that could flow from this event are enormous. It may reshape or massively increase the cost of getting a mortgage or insurance on many buildings.

Another concern is the lack of concern about political corruption. Even the recent headlines about House Speaker Nancy Pelosi (D-CA) disclosing that her investor husband made several now-profitable trades in various securities brought hardly a stir or screams of insider trading. Her husband bought Amazon calls on May 21 when it closed at $3,259.05. This was just six weeks before the Pentagon suddenly pulled the rug out from under Microsoft’s $10 billion JEDI cloud computing deal. This has caused Amazon’s stock price to soar by giving Amazon and Bezos a good chance of landing this very lucrative contract.

Like so many people linked to Washington decision-makers, it seems Paul Pelosi has done very well in the markets, according to Fox Business, “The speaker has no involvement or prior knowledge of these transactions,” and “The speaker does not own any stock.” Yes, this is a time when such thinking is not only common but acceptable, and yes, this is a time when many of the hard-working people and savers that made America famous are being thrown under the bus.

The Government-Financial complex, a combination of the Fed, the too big to fail, and the government has become a great threat to our freedom. Following the 2008 global crisis, the authorities acting primarily to prop up governments and the economy took actions to save the financial system by bringing big banks deeper into the fold. Over the years, as the Government-Financial complex and big tech came together the mix of concentrated power they now yield has become toxic. All this has resulted in a false economy and a soaring national debt that is now over 28 trillion dollars.

Their argument that it is better to intervene heavily in markets rather than do nothing repeats the mistakes that created the Great Depression. Lawyers and politicians historically garner rather low marks when it comes to ethics. Ironically, we allowed these same people to pound out the 2,300 plus pages we call the Dodd-Frank Act. This is said to be our new shield from abuse. With this in mind, we should not be surprised the steps taken over recent years to save the financial system have resulted in destroying true price discovery and led to the creeping nationalization of markets.

What does it mean when someone says ‘ Who is John Galt’? The website Quora came up with the following answer;

In the classic book “Atlas Shrugged”, the phrase Who is John Galt is a cry of despair and hopelessness. It describes a situation wherein the pistons are removed from an engine making that whole metal mass of a car useless. The pistons form a small part of a vehicle’s mass, but provide the entire reason for a (petrol) car’s existence. Similarly, most great organizations and societies are moved by a small group of people — the innovators. When those are removed, the entire thing falls apart.

They go on to note that the engine is usually among the last parts of the car to give up. When the engine gives up, it usually marks the vehicle’s end. While we may not be at, our end, or the end, it is understandable why so many of the most capable contributors of our economy are now moving towards the sidelines. Capable and smart people do not have to work hard to make ends meet and are proving this by going out and enjoying life rather than working to support those that won’t. When people decide to remove themselves from a game they see as rigged in favor of those far less deserving it is an indication that at some point even Atlas will shrug and let the world fall.
Go Back