ECU Defense Boasts Experience and Depth | Beaufort County Now | Coming off a shortened spring season that saw the Pirates reach the American Championship Semifinals for the second time in three seasons, the East Carolina soccer team will bring back an experienced group that will try to push on even farther. 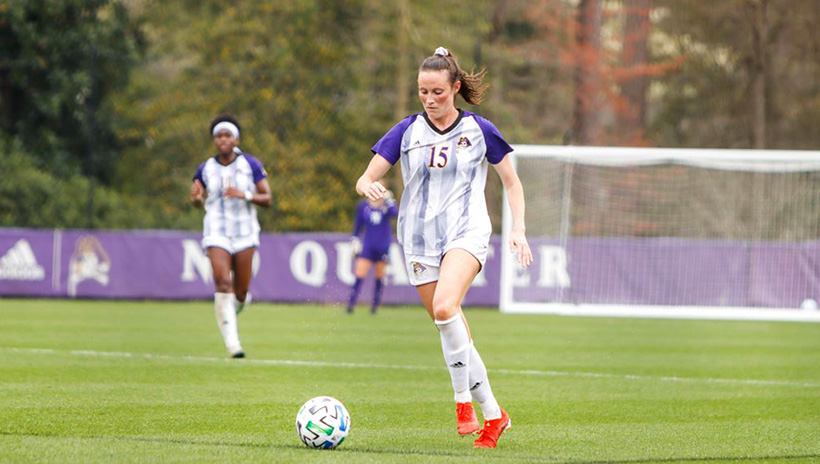 GREENVILLE, N.C.     Coming off a shortened spring season that saw the Pirates reach the American Championship Semifinals for the second time in three seasons, the East Carolina soccer team will bring back an experienced group that will try to push on even farther.

"We could not be more excited to get things started with this group," said head coach Jason Hamilton. "We have a tremendous amount of talent that we want to start putting it all together. We truly feel that we have improved on both sides of the ball and we are at a point where our team will look very different moving forward. Depth is such an important thing in the college game having two games each weekend. In the past losing a player or two would be the difference in being able to compete, with this group we have depth in every position. It will be fun to watch the team compete with each other day in and day out, this will only push us to get better and allow our program to grow. We have a very tough schedule and the AAC is one of the toughest conferences to play in, this group will be fun to watch."

The Pirates will bring back nearly every member of the team's backline and will have one of the most experienced defensive cores in program history. Leading the way is 2019 and 2020 AAC Second-Team All-Conference selection Kim Sanford. Sanford has appeared in 65 of a possible 66 games in her career and has played 2,703 of a possible 2,727 minutes over the past two seasons. The Philadelphia, Pa., native has a chance to become the first Pirate to be named to an AAC All-Conference team three different times and just the eighth ECU player to receive a trio of All-Conference honors.

"The backline is definitely our most experienced group, as well as the area we have the most depth," said Hamilton. "This will give us a lot of options in how we want to play and in what shape we play in. We know our back line will put us in a position to be in every single game, they will bring a consistency piece each and every week. There will also be a lot of leadership from this group on and off the field. Having as much depth in the backline that we have will be key in keeping them fresh throughout the entire season."

Along with Sanford, Carsen Parker earned AAC Second-Team All-Conference honors. Parker started the season alongside Sanford in the center back position and was named AAC Defensive Player of the Week on Feb. 15 after scoring the game-winning goal against Houston. Midway through the season, Parker shifted forward, where she earned Offensive Player of the Week honors after scoring two goals and an assist at SMU. With Parker moving up front, Addison Salz stepped into her role as center back, starting and playing every minute of the final six games of the season. Salz added a new dimension to the back line, giving the Pirates another left-footed option.

Joining the center back trio are the returning starters at outside back, Morgan Dewey and Maycie McDougal. After missing the 2019 season due to injury, Dewey returned to the field in 2020 and was deadly on the left side. The Johns Creek, Ga., product finished the year with a goal against VCU and had assists on Parker's game-winning goals against Houston and at SMU. On the other side, McDougal was a stalwart presence, starting 10 matches and finishing sixth among field players with 816 minutes played.

The backline will also have impressive depth. Sierra Lowery appeared in six games in 2020 and made five starts. She played the entire match against both Temple and South Florida and will be an option for the Pirates in both the defense and the midfield. Also returning from 2020 is sophomore Kylie Alvarez. While Alvarez did not appear in any games last season, she was a standout for BYRC Elite Academy at both the 2018 and 2019 ECNL National Tournament before arriving in Greenville.

Rounding out the defense is a trio of newcomers, Peyton Godbey, Lindsay Aiken and Abby Sowa. Godbey arrived on campus in January and trained with the team during the spring season. The Leland native earned multiple invitations to US Training Center events during her prep career and also competed on State and Regional Olympic Development Teams. Aiken helped lead Penn Fusion to the No. 1 ranking in the country during the 2018-19 Elite Clubs National League while Sowa helped lead Southington high school to the 2019 Connecticut State Championship game and made multiple All-State teams.

Behind that defense will be a familiar trio of goalkeepers. Maeve English will return after one of the best freshman seasons in East Carolina history. English started all 11 games and was a unanimous selection to the AAC All-Rookie team while becoming the first freshman goalkeeper to be named AAC Goalkeeper of the Week three times. The Greenville native was named to the AAC Championship All-Tournament team and finished the season second in the conference in both saves (36) and save percentage (.750).

Meaghan Haley will be in her third season as a Pirate, appearing in two games during the 2019 season. Haley also appeared in four games for LIU Brooklyn in 2018 before transferring to East Carolina. Maggie Leland gained experience as a backup goalkeeper during her rookie 2020 campaign and held a goals against average of just 1.1 during her time at the Gwinnett Soccer Academy.

"This is a good group of keepers that work well with each other and push each other to get better every day," Hamilton said. "All three work extremely hard and their coaches and teammates have complete confidence in each of them when called upon. This is such an important position in order to have success and this group will put us in a good position to have that success."

The Pirates will get their first taste of game action on Aug. 10 with an exhibition at Longwood before playing in Johnson Stadium on Aug. 14 in an exhibition against UNCW. The season officially gets underway on Aug. 19 with a trip to Old Dominion before the home opener against VMU on Aug. 22.
Go Back