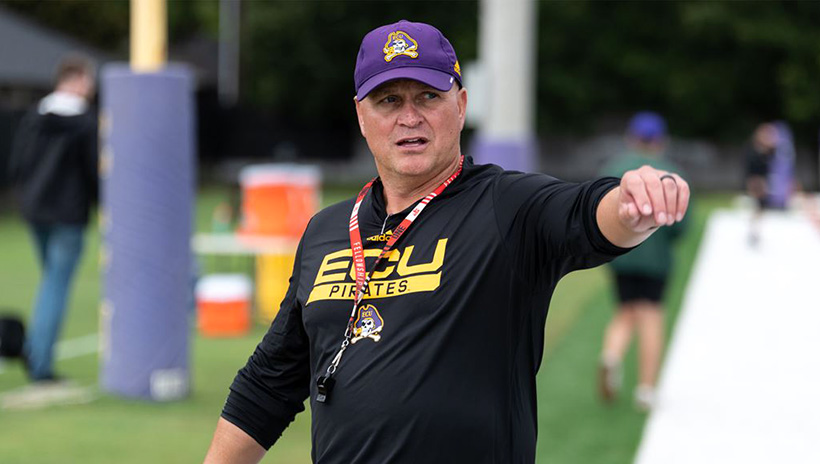 Following a 6:15 a.m. wake-up call, breakfast, treatments, positional meetings and a 10-minute walk-through, Houston and his staff conducted a fundamentals-oriented 110-minute practice in shorts and helmets in unseasonably cool and damp conditions. ECU will follow Wednesday's workout with sessions through Saturday before its first scheduled off day of camp Sunday.

"It's great to be out at day one of practice," Houston said. "It was an exciting day and just good to be back together. Today was a little more normal and it's great to be closer to what we are more accustomed to doing this time of the year. There was good enthusiasm and good effort from the kids, but we also had a lot of the first day stuff out on the field."

The 2021 Pirates return 10 starters on offense and nine on defense, and welcome back a total of 59 lettermen off a team which recorded an overall mark of 3-6 during the pandemic-shortened 2020 season. Because of the NCAA's COVID waiver that granted an added year of eligibility, ECU lost only 15 lettermen from a season ago, which included starters Blake Proehl (WR), Damir Faison (OLB) and Chris Willis (DE). Additionally, two members of the Pirates' special teams squad — record-setting kicker Jake Verity and snapper Robert Hill — must be replaced.

Topping the list of offensive returnees include senior center/guard Fernando Frye (22 career starts), junior quarterback Holton Ahlers, sophomore receiver Tyler Snead and freshmen running backs Rahjai Harris and Keaton Mitchell. Ahlers, Snead and Harris led the Pirates in passing, receiving and rushing, respectively, a year ago. Ahlers, who has opened a team-high 25 contests, has passed for 7,093 yards and 51 touchdowns during his career, while Snead has 134 receptions for 1,519 yards and 14 TDs. Harris earned American Athletic Conference Rookie-of-the-Year honors in 2020 after rushing for 624 yards and four scores, and Mitchell added 443 more on the ground.

East Carolina's defense brings back its top eight tacklers from 2020, including junior inside linebacker Xavier Smith who tallied a unit-best 72 stops last fall after recording a team-high 81 in 2019. The Pirates also return players who netted 17 of 18 takeaways a year ago — a total which stood among the Top 25 nationally — and featured notable FBS producers in freshman defensive tackle Elijah Morris (3rd in recovered fumbles), sophomore cornerback Ja'Quan McMillian (6th in interceptions) and sophomore safety Jireh Wilson (16th in forced fumbles).

"It's refreshing to have the experience coming back that we do have from the guys that played so much last year," Houston added. "We are bigger, faster, stronger and in better shape and look a heck of a lot better now than from the spring game. We have continued our mental progression as far as mental discipline and toughness, which comes after a couple of months training together."

The Pirates are scheduled to progress to shells (shoulder pads) for the first time Friday before a full gear workout Tuesday per NCAA rules. ECU will close camp on Saturday, Aug. 21 with its second scrimmage before returning to a customary in-season late afternoon schedule in preparation for its opener against Appalachian State in Charlotte on Thursday, Sept. 2.