Published: Friday, August 27th, 2021 @ 12:50 am
By: Carolina Journal   ( More Entries )
Publisher's Note: This post appears here courtesy of the Carolina Journal. The author of this post is AUTHORNAME. 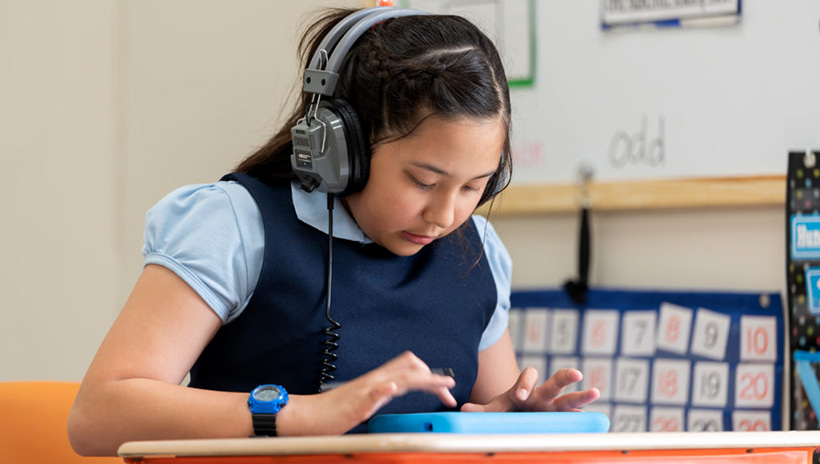 Mia Martin, who is 11 and the daughter of Iraq veteran James Martin, has benefited from school choice in North Carolina. At 3, Mia was diagnosed with autism. | Photo: Maya Reagan / Carolina Journal

Without North Carolina's school-choice scholarships for students with special needs, retired soldier James Martin would have moved his family to another state. That's how important these scholarships have been to his 11-year-old daughter, Mia.

"It's been priceless," said Martin, a veteran of Operation Iraqi Freedom and Operation Enduring Freedom. "People ask me why we're staying in Fayetteville, North Carolina. This is it."

Mia was diagnosed with autism at age 3. Martin and his wife initially enrolled her in an early intervention program in Cumberland County Public Schools. Mia attended a mainstreamed kindergarten class, but at the conclusion of her first year the school system decided a self-contained classroom would be a better fit.

So, Mia spent first through fourth grade at Cliffdale Elementary in Fayetteville. At first, she benefited from Applied Behavior Analysis services in the classroom, but the school system discontinued them after the first grade. That meant Mia ended up pulling 12- to 13-hour days in combined classroom time with her behavioral tutoring.

"She would wake up at 5 a.m. to be on the bus by 6 a.m.," Martin said. "I would pick her up from school at 1:15 p.m. to go to clinic for ABA services from 2 p.m. to 6 p.m. We'd get home around 6:30 p.m. We did this Monday through Friday for four years. She was frustrated, tired, sad, angry, and I felt helpless to change the confines and conditions of her environment."

Even with a classroom of 16 students with a special-education teacher plus an assistant, Mia struggled to learn. At one point, the teacher put her in a seat in the far-left corner of the classroom — next to the bathrooms — because her behavior had become such a distraction.

"Our greatest fear was that Mia would get lost in the system — that she would not get the services and support she desperately needed and would end up incarcerated or destitute as an adult because no one took the time to understand her limitations," Martin said.

That all changed in 2020, when Mia was presented a new opportunity to thrive through a private-school education. Even as classrooms were shutting down across the state and students were experiencing unprecedented learning loss, the pandemic provided the catalyst to put Mia on the pathway to a better life.

The lever of change came when Martin and his wife secured help through North Carolina's Education Savings Account and the Children with Disabilities Grant Program. The combined funding through the two programs covers the tuition for Mia to attend New Leaf Academy, a specialized school-clinic that is a collaboration between First Impressions Academy — a private school — and a New Leaf Therapeutic Services, an ABA clinic.

The classroom size matches six kids with autism and six ABA technicians and clinicians, with one special-education teacher. That's a seven-to-six teacher-to-student ratio.

Martin calls the school "a diamond in the rough right here in Fayetteville, North Carolina." It's an environment where Mia is thriving.

"Her maladaptive behaviors, aggression levels, and meltdowns have been reduced significantly, and the self-soothing and coping methods taught by the school clinic have helped tremendously," Martin said. "Her eye contact, verbal requests, and overall interaction with us and others have increased dramatically."

Even during the pandemic — when public schools were shuttering across the state even for students with special needs who desperately needed ongoing help — Mia's education never slowed down.

"Our school wasn't impacted by the lockdowns and restrictions. There was no virtual learning where my daughter would've been forced to sit still in front of a computer attempting to be educated for hours while enduring endless frustration and meltdowns," Martin said.

If Republican lawmakers in the General Assembly are successful this year, more help could be on the way for students like Mia.

In April and May, the House and Senate passed their own versions of legislation that would combine the Children with Disabilities Grant Program and ESA into one program to ensure adequate funding and reduce wait lists.

The bills would also expand the Opportunity Scholarship Program, an income-based scholarship meant to help middle- and working-class families pay for private-school tuition if they want to escape their locally zoned public school.

To Martin, continuing to make North Carolina a leader on school choice will pay dividends for decades to come.