Biden’s meeting with Gold Star family blows up in his face as family members walk out on him | Beaufort County Now | “My son is gone, and I just want all you Democrats who cheated in the election, or who voted for him legitimately, you just killed my son,” 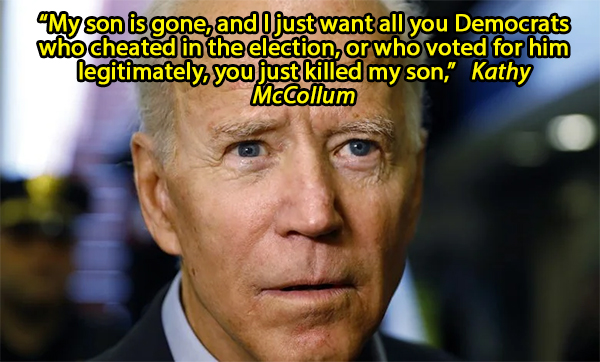 There are 13 new gold star families, a distinction no family would ever want, after a terrorist attack in Kabul took the lives of 13 military members.

The families of those brave military members were met on Sunday by Joe Biden as he went to Dover Air Force Base for the dignified transfer of their bodies, and some of those family members had no interest in meeting Biden, The Washington Post reported.

Those included the family members of Marine Corps Lance Cpl. Rylee McCollum who was killed in the attack.

“One of McCollum’s sisters, Roice, said she and her sister and her father joined McCollum’s wife, Jiennah McCollum, on the trip. But when it came time to meet with the president, they left the room, because she said they did not want to speak with the man they held responsible for McCollum’s death,” The Post said.

Only Jiennah stayed to meet Biden and when she left she was disappointed with the encounter.

“The president brought up his son, Beau, according to her account, describing his son’s military service and subsequent death from cancer. It struck the family as scripted and shallow, a conversation that lasted only a couple of minutes in ‘total disregard to the loss of our Marine,’” Roice said to The Post.

“You can’t f— up as bad as he did and say you’re sorry,” she said. “This did not need to happen, and every life is on his hands.”

This came after his mother went off on Joe Biden during a call on the SiriusXM radio show Wilkow Majority, calling the president a “dementia ridden piece of crap.”

Kathy McCollum joined the show to express her sadness and outrage at the death of her 20-year-old son Rylee.
Calling into the show on Saturday, Rylee’s mother Kathy could not hold back her anger over her son’s death, and let loose on Biden.

“Hey, my son was one of the marines that died yesterday,” she said. “And I have to listen to that b**ch.”

“My son was one of the marines that died yesterday,” she continued. “20 years and six months old. Getting ready to come home from freaking’ Jordan to be with his wife to watch the birth of his son. And that sackless, dementia ridden piece of crap just sent my son to die. I woke up at 4’o’clock this morning to marines at my door telling me my son was dead.”

“So, to have right on before me to have to listen to that piece of crap to talk about diplomatic crap with Taliban terrorists who just freaking blew up my son and no, nothing, to not say anything about … ‘oh my God I’m so sorry for failing,’” said McCollum.

“My son is gone, and I just want all you Democrats who cheated in the election, or who voted for him legitimately, you just killed my son,” she said. “With a dementia ridden piece of crap who doesn’t even know he’s in the White House who still thinks he’s a senator.“
“So, I’m gonna try and calm down, sorry,” she continued, and offered details to verify her identity. “Marines just left my house just two minutes ago getting my divorce decree. Two marines showed up my house at 4 o clock in the morning telling me my son was dead so my name is Kathy McCollum, my son is Riley James McCollum. You can check it out.”

“His wife, she might not want me to say her name, they just got married on February 14th and were expecting a baby on September 26th and I just can’t…,” she added, noting that Rep. Lauren Boebert would be visiting her to help convey her message to the rest of America.

“I just couldn’t sit by idly because I needed to process through anger instead of tears and this is how I’m going to do it and Lauren Boebert is coming to my house tomorrow and my representative will be at my house tomorrow and we’ll speak and hopefully she’ll be able to convey my message to the rest of the United States that this was, she said ‘your son did not die in vain,’ but guess what, my son did die in vain,” she said.

“This was an unnecessary debacle that could’ve been handled properly,” added McCollum. “They had months and months to remove everyone from Afghanistan and they chose not to and so they sent in freaking, what, 6000 troops? And my son through the laws of statistics my son was the one that just got blown up in a terrorist bomb yesterday. … So instead of grieving and crying I’m just getting mad.”

“I never thought a feckless piece of crap would send him to his death and smirk on television while he’s talking about people dying, with his nasty smirk,” she continued.

“The dementia ridden piece of crap needs to be removed from office. It would’ve never happened under Trump,” she said.

“For every Democrat who cheated or voted for Biden that left my son in harm’s way and left this dementia ridden piece of crap who’s a treasonous man who got into office because he was running out of funds for his family, you did this to my son,” she continued. “To every Democrat who’s listening, you did this to my son to prop up a disgusting human being. I guess I don’t have anything else to say.”

There was also Gold Star mother Paula Knauss who had “disappointment over what Knauss deemed a lack of leadership and protection for the service members in Afghanistan,” The Post said.

“You can’t have a hasty withdrawal after 20 years of war,” she said.

“Because it’s beyond me. It disgraces the name of all those who have fought in the past and who are now on the ground, foreign ground. fighting right now,” she said. “My son’s [82nd] Airborne is still there, and they deserve to be protected.”