The Division of Marine Fisheries is destroying the seafood industry 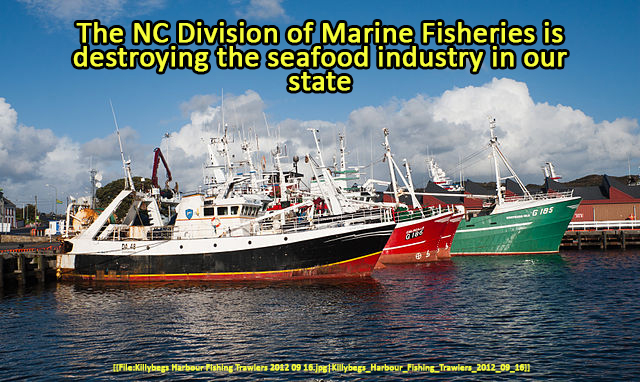 Easton Edwards wrote an excellent article in the 9-3-21 edition of the County Compass.  You can read it here.  In it Mr. Edwards accurately and clearly challenges the legal basis for N. C. Marine Fisheries Management regulatory system.  Anyone who loves fresh seafood and those who make a living, including restaurants, Downeast should give strong consideration to the points he makes.

The article argues that Fisheries Policy is actually a draconian abuse of government power that is controlled by special interests, rather than in the Public Interest.  It is past time our legislators reform this archaic regulatory apparatus and make it pass constitutional muster.  We think, in fact, that the N. C. Constitution needs to be amended to make it state policy that seafood is a public resources, owned by the People and their use of this resource cannot be restricted except in the public interest, subject to strict judicial scrutiny.

We think Mr. Edwards very adequately makes that case.  We, here, will focus on the fallacy of the science used to regulate this resource.

Before doing that, we should explain that the Division of Marine Fisheries has effectively destroyed the tradition fisheries industry of Eastern North Carolina under false pretense.

That pretense has been that the regulatory framework is necessary to preserve the fisheries stock in our coastal waters.  A group of non-elected people make the rules, based on recommendations from a group of bureaucrats who pretend that they base those recommendation on “science.”  Yea, right.  Just like the latest scam run by similar bureaucrats who claim that they are seeking to protect the public health with economic lockdown, mandatory face masks, and vaccines that have not been proven to be safe nor effective.  Both of these scams are similar to those who claim that we must impose severe restrictions to protect the planet from burning itself up…climate change.  All three are scams because they are not based on valid and reliable science.

Here's the problem.  Science has for hundreds of years held that the “scientific method” is the process of positing a hypothesis and then testing that hypothesis with valid and reliable data which supports or refutes the hypothesis.  The process touts transparency, both in the data used and the analytical processes used to test the hypothesis.  Simply stated, if one scientist proposes a hypothesis and contend that it has been proven by the data then the data should be available to other scientists and if they replicate the analysis then they should all come to the same conclusion regarding the truth of the hypothesis.  The science is said to be reliable if it actually measures what it purports to measure and reliable if it can be replicated by any other competent scientist.

Without going off the academic deep end, it should also be pointed out that various variables may be involved, some acting on the data to change the results and other variables that may be present may actually not playing a significant role, even if present and operating.  That leads to a condition the scientific method describes as “correlation” versus “causation.”  Causation is what it sounds like.  It is the cause of the effect on a change in the data being analyzed.  Correlation, on the other hand, simple says that the data may have changed as the effect changed but that does not prove the correlation variable caused the change.

Let us use a classical example.  We all know that the price of a commodity, say corn for example, is determined by supply and demand.  If the supply variable goes up, and demand stays constant the price will come down, and vice versa.  Now let’s assume you are a commodities trader on the Chicago Board of Trade.  You want to make money buying and selling corn.  So, you want to know what the future supply of corn is going to be.  If, for example, you learn that the corn harvest is going to be very low this year you my expect that the price will go up.  So you buy corn, before the shortage hits.  Then when it does hit and the price goes up, you sell the corn (or the contracts to buy or sell corn).  Of course it is never that simple, but you get the point.  The important variable is the supply.  So how do you determine what the supply will be?

One way some statisticians might choose to determine the future supply is what is called “sampling.”  You don’t have to measure all the bushels of corn that make up the total supply.  You can predict by taking a sample.

It would be like going to a sample of farmers and measuring the amount of corn being produced in the sample.  Then you project the total harvest based on the sample and adjust for known changes in demand and thus the price can be projected.

So, what’s corn got to do with fish, you might be thinking?

Well, the Division of Marine Fisheries uses sampling to measure the amount of fish is the waters.  One of their favorite measurements is the “catch.”  They have fishermen report how many fish they catch.  If the amount of the catches is up there is a presumption (false in fact) that there are more fish in the water.  If the catch is down, they presume (falsely again) that the “stock is down.”

Now they use other sampling techniques to count fish.  One method is to drop electrical charges in the water in certain places and when the fish float to the top they count them.  They say this does not harm the fish, but nobody has ever asked the fish if that’s true or not.  But it does give these bureaucrats a count.

You don’t have to be a rocket scientist, or a marine biologist, to know that the sample may or may not be reliable or valid.  But let’s put that aside for the sake of this discussion (but it should not be put aside in developing public fisheries policy).

By whatever sampling technique, when these brilliant bureaucrats determine the stock is lower they clamp down with regulations on fishermen.  This is the foolish notion that the variable that caused the decline was fishing.  That may or may not be true.  Many species of fish regulated by the Division migrate from time to time, some in search of food supplies, more friendly water (temperature etc.) and some migrate for sex.  They’re called anadromous fish.  The migrate from salt water up fresh water streams to spawn.  The point here, for this discussion, is that there are numerous variables involved in accurately counting fish.

What you never hear the regulators explain is how accurately they were in their counts.  When we challenged a presenter at a recent Division hearing the response was:  “we do the best we can.”  But the regulators pass draconian regulations as if the counts were absolutely accurate.  The fact is, they never, ever are.  So the issue becomes:  “how accurate” is the science upon which the regulations are based.

We suspect you’re beginning to wonder why they don’t disclose how successful their regulations are in achieving their stated purpose.  And that is a profound question the Legislature should demand the Division of Marine Fisheries answer—every time they change their regulations.

The legal standard that should be applied is called “strict scrutiny.”  That is a process that begins with the question:  Is this (fishing) a fundamental right.  Mr. Edwards made that case that it certainly is.  Next strict scrutiny hold that the government can still abridge a fundamental right…but only is there is a compelling reason to do so in the manner in which the regulation is to be applied and that the manner of application is no more stringent than is necessary to accomplish a legitimate public purpose.

The Division cannot show that their data is sufficient to meet the compelling reason simply because it is neither valid or reliable, because of the flaws in the sampling procedures.  Secondly, it cannot meet the test because it cannot show that the regulations accomplish a legitimate purpose.  It is all supposition.  And finally, it fails to meet the “least restrictive manner” necessary to accomplish the stated purpose.

If you doubt this just Google the “River Herring” management history.  North Carolina’s river used to be swarming at certain times of year with River Herring.  Then the population began to drop.  True to form the Division imposed stronger limits on taking River Herring.  The population continued to drop.  And you guessed it.  These bureaucrats just imposed stronger and stronger regulations.  Year after year then clamped down until eventually it was outlawed to take River Herring.  Now, if regulations worked one would rightly expect the population to return to more prolific levels.  Just the opposite happened.  And that story is repeated over and over, to a more or lesser extent.  Bottom line:  The Division of Marine Fisheries has a sorry track record, when sound science, solid data and common sense are applied.

Instead, the Division of Marine Fisheries just gets larger (with bureaucrats) and puts thousands of people out of business and relegates those of us who like seafood to pay inflated prices or eat imported frozen seafood mush.

Seldom has any government program been less successful than fisheries management.

Get yourself some fresh seafood while you can.  It’s going away fast.