"Monumental: In Search of America's National Treasure." | Eastern North Carolina Now | We often hear people talk about America's Christian heritage. Usually it is in the context of some government action or judicial decision which denies this heritage.

Kirk Cameron's film "Monumental" Reminds Us of Our Christian Heritage

We often hear people talk about America's Christian heritage. Usually it is in the context of some government action or judicial decision which denies this heritage. There is no denying that our 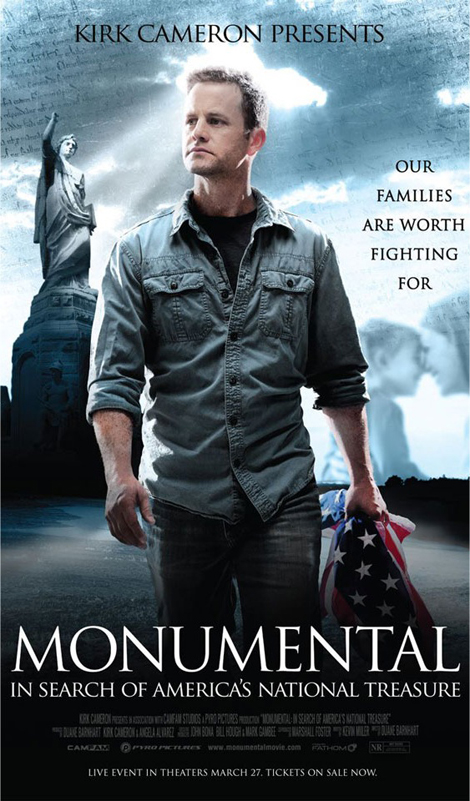 government and other forces are operating in warp speed to remove all vestiges of our Christian roots, while at the same time attempting to reclassify our Founders as other than Christians and attempting to define our very history.

And they are making tremendous headway. We saw the extent of the hostility towards our religious heritage when the delegates to Democratic Convention voted to remove the word "God" from its platform. The convention chairman, Antonio Villaraigosa, declared that the votes were sufficient to keep "God" in the platform but anyone who watched the vote knew the opponents really won the day.

But those who understand the significance of our Christian heritage are fighting to keep that heritage alive.

Kirk Cameron, the adorable teen actor from the (1985-1992) sitcom Growing Pains, is one who understands the significance. Furthermore, he understands that America needs a re-commitment to the values our founding Christians brought with them in the 17th century to colonies like Plymouth and Massachusetts Bay to salvage our "rotting soul." Cameron says that when he looks around, he notices that the fruit on the tree of American liberty is rotten and the roots are poisoned. "As I look around I get this sinking feeling that we're off track, that there's something sick in the soul of our country. When I examine the fruit that's hanging on the tree of America, I can see that it's rotting. And that concerns me deeply." He observations led him on a journey to find out the secret formula that made America great. He set out to find our "national treasure."

"I'm retracing the footsteps of our Founders from England to America in the hope of discovering our true "national treasure." I want to listen to them, to learn from them. Because I suspect Forefathers knew we were a forgetful people, that someday we would lose our way as a nation. So they left us a map that would guide us back to the source of America's success.

What I've discovered is amazing! The key to transforming our nation and securing our children's future is not complicated. Best of all, it's not hidden away like something out of the Da Vinci Code. It's been right in front of us all along, and I can't wait to show it to you in this film."

What do we mean by "Our Christian Heritage"?

We certainly don't refer to it as a way to suggest that Christianity be the official religion of the United States. We have the First Amendment to protect us from the establishment of any one religion, so that our religious conscience is free from the coercion or criticism of other religions (or non-religion) and no one is forced to support an offensive religion with their tax dollars.

Out Christian heritage finds its roots in the very foundation of our government. Its principles and values affect many aspects of our lives, none more profoundly than the very form of government that we enjoy and benefit from. The concept of the sovereign person, the being "created in God's image," the inalienable dignity of every human being, tolerance towards others, charity, service, equality before the law, and personal responsibility all come from the Christian message. Every person, old or young, strong or weak is equal before the Lord.

Religion plants the seeds of morality and ethics. It promotes strong families, which are the bedrock of a healthy, ordered, productive society. It gives the representative a servant's heart. It sets guidelines for conduct that benefit society as a whole. It outlines government that is closest to the individual, where it can be most responsive. It establishes notions of fairness and equity. It establishes proper priorities for a strong community. When we speak today of the Christian heritage, we speak of institutions (mostly government) that come from the Hebrews and values that we owe to the Judeo-Christian culture. The basis of our law comes from Natural Law and from God's Law.

And as Kirk Cameron emphasizes in his movie Monumental, America was founded by settlers who wanted to establish a new land where they could live the teachings of the gospel.

The gospel was introduced to America with the Pilgrims and the Puritans, and the timing of their voyages to America was significant. It coincided with two major events: First the Bible was translated from Latin into English in the late 16th century and then in 1610, the work went to press, becoming available in print the following year. It became known as "The King James Bible" in honor of England's king at the time. Monumental begins with Kirk Cameron's research into the Pilgrims and their famous voyage to the New World on the Mayflower. He traces their steps, from point to point, as they escape from England to start a new colony, Plymouth Colony, in an unknown and uncharted new land. The story is told by Cameron, in the form of a narration and in dialogue with experts, as he goes from point to point along the Pilgrim's escape route from England. 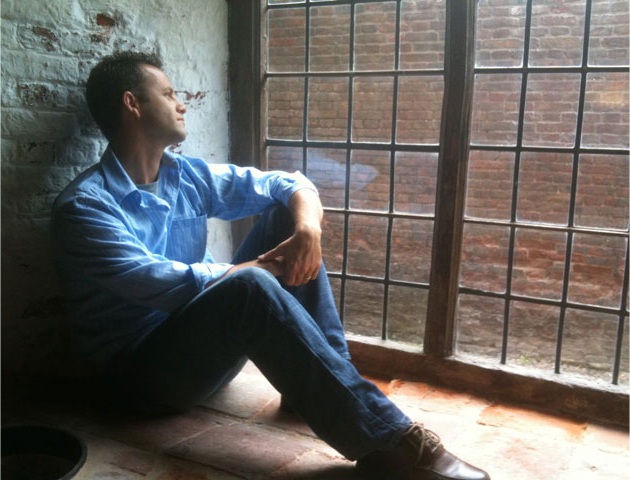 Kirk Cameron: A serious man, a good Christian: Above.

We learn how the Pilgrims - part of the Puritan movement (separatist movement, from the Church of England) - became spiritually aware when the printed English Bible became available. They could read the gospel of Jesus Christ firsthand and not have to wait to hear scripture read in the Church, headed by the King of England. This relatively small band of men, women, and children had a strong desire to serve God as they saw fit, free from the Church of England and the religious policies of the King. Being identified as "separatists" or "purists" made them potential traitors to the Crown and made them outcasts. In order to exercise religious freedom, they would have to leave England, settle in Holland (perhaps one of the only places they could be free from persecution) for 11 years, and eventually make their way back to England to commission a ship to take them to the New World. Monumental chronicles their trials and tribulations. We learn how God was protected them and how their faith helped them endure each of the many setbacks that threatened to derail their mission. We learn that the Pilgrims and members of the crew signed a compact, the Mayflower Compact, in 1620 before departing the ship to express their desire to be rid of British law and to establish a form of self-government based on just and equal laws and for the advancement of the Christian faith. In the New World, government would be established to serve their interests and they would be masters of their government, unlike in England, where the government was the master of the people who exist to serve the interests of government.

By the time the film moves on to Plymouth, Cameron has already shown the Pilgrims to be far more courageous and principled that the stoic, starched creatures in black and white clothes with buckled black shoes that we learned about in elementary school. They were devout, hard-working, family-loving, persevering people were committed to establishing a successful colony based on self-government and religious freedom.

One of the most striking parts of the movie was when Cameron visited a monument that I had never heard of - "The National Monument to the Forefathers in Plymouth, MA" (also referred to as "The Pilgrim's Monument"). In the film, the monument is referred to as the "Matrix of Liberty." The "Matrix of Liberty" is an enormous granite monument devoted to the principles that the Pilgrims embraced in Plymouth to order their society. The Pilgrims ordered their society on eternal truths, including faith, morality, justice, mercy, and education. In fact, the monument is structured and built to show the interdependence of these truths. The center of the monument is a giant women holding a Bible and pointing to the Heavens. She is Faith. At each of the four corners of the base of the monument is a pillar, representing Morality, Law, Education, and Liberty. The pillars have a certain order, starting with Morality and ending with Liberty.

The monument describes the ordered foundation of the Pilgrim society. Here is how Cameron described Faith and the four pillars:

Faith - She is pointing to God because her faith is in the God of the Bible and in Jesus Christ. She is holding the Geneva Bible which is open, indicating that she is actively reading it. She has a star on her forehead to signify that she has wisdom, which comes from the Bible. She believes in Jesus Christ, who was sent to Earth to set man free. The first pillar is faith. Faith is necessary for all the other pillars.

Morality - The statue is of a woman with no eyes, holding a Bible. She has no eyes to signify that morality is an internal characteristic. Morality means the "heart is right." To achieve morality, the heart must be transformed according to the word of God.

Law - The statue is of a woman holding the scales of justice. There must be some degree of order in society and order is established by a set of laws. Laws are based on God's law. They protect and promote goodness and punish and prevent evil. Hence, law must be morally just. She is holding the scales of justice to indicate that the law applies equally to everyone. Laws must be fair and equitable. Punishment, for example, must be in set in fair relation to the offense. Finally, society should be merciful, just as God offers mercy and grace.

Education - The statue is of a mother teaching her children. She is holding an open Bible and pointing to the Ten Commandments. Parents should educate and train their children in morality and religion so that they will grow up to be responsible citizens, capable of maintaining a free and ordered society.

Liberty - The statue is of a chiseled warrior, carrying a sword and draped in the skin of a lion. The lion's head is draped over his shoulder. He is called "Liberty Man." The sword represents strength and the lion represents tyranny. The man is strong because he has faith and is moral. He has been educated and has defeated tyranny because his laws are strong and just. If all the other pillars are promoted in society, its people can be trusted with their self-government and will be strong enough to pass on liberty to the next generation. In other words, Liberty Man is the result of obeying the "Matrix of Liberty."

The so-called "Matrix of Liberty," and the values and priorities it represents, is the real legacy of the Pilgrims. Not the black and white dress or suit with the shoes with the black buckle. Not the hair up in a bun with a white kerchief or the turkey feast. Yet no one celebrates this. Public schools only teach about the successful harvest, and not the successful formula for religious liberty and other fundamental liberties.
Go Back