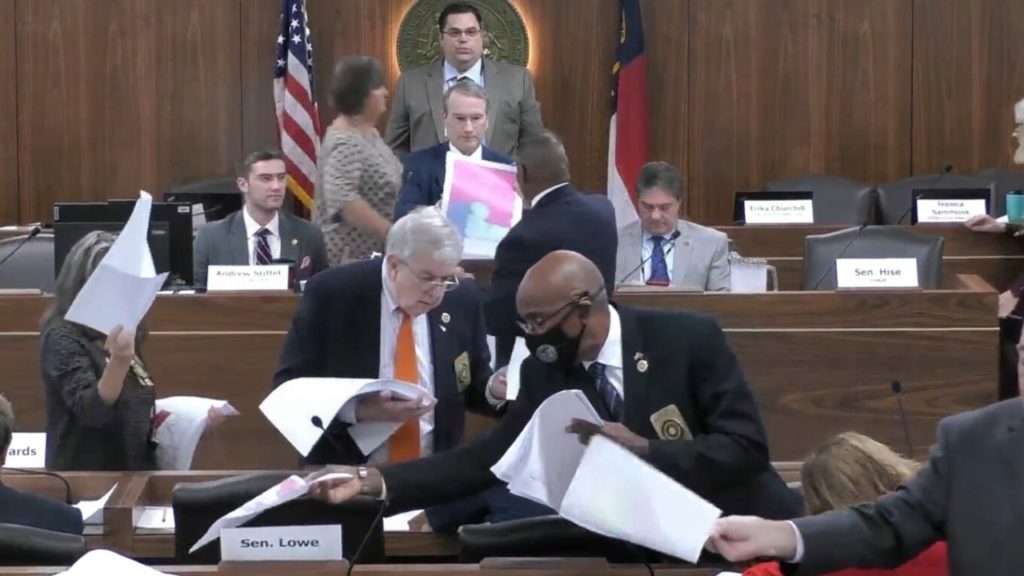 On Tuesday, November 2, The N.C. House voted along party lines in favor of its new House election district map, while the N.C. Senate approved new congressional maps. The votes come despite many Democrats saying the redistricting committee should "go back to the drawing board."

Democrats called to redo the maps to include race as a factor in map-making. However, Republican leadership said that the map process was transparent and strictly followed the law. They said decisions in previous litigation prevent race from legally being considered in district boundaries.

"The redistricting process has been the most transparent in the history of our state, and I am confident that the districts that have been drawn are constitutional in every respect," House Speaker Tim Moore, R-Cleveland, said. "Lawmakers took into account population growth in areas like Raleigh and Charlotte and dwindling population trends in rural counties, which means fewer legislative representation."

The redistricting chairman, Rep. Destin Hall, R-Caldwell, addressed the chamber defending the process and map-drawing criteria, which did not include prior voting data and took a "race-neutral" approach.

"Every effort was made to keep areas intact. The first criteria was to keep counties whole, like Lee and Chatham," he said. "We also kept municipalities together as much as possible, bare minimums of double-bunking. We didn't consider racial or political data in drawing this map. An outside consultant used to be used for the process. We did it this time transparently. Maps were done without a computer algorithm. It is an unprecedented transparency, not using political data on this map."

Hall called it the most transparent redistricting process ever in the history of the state and said he was disappointed that no House Democrat put forth a map to be considered for the public, unlike their Democrat colleagues in the Senate. Democrat House members introduced a few amendments that failed to pass.

"Race is a factor that you need to consider making districts fairer," said House Minority Leader Robert Reives, D-Chatham. "History can be used to teach us how to be better. We don't want to use our history in the wrong way. The most important aspect in bringing people back together is people having faith in their government. I am asking you to vote no to be fair. Let's keep tweaking this to make it fair."

Rep. Susan Fisher, D-Buncombe, said the maps are like past "illegal" maps and have "double-bunking" issues.

"People are not stupid," she said. "They believe politicians have no business drawing political lines. They prefer nonpartisan redistricting. I will vote no. I prefer a truer process."

The process has not been without its share of controversy. Citing transparency after past objections and lawsuits, the House and Senate redistricting committees had open rooms in which the maps were drawn. The process was also live-streamed on YouTube for weeks, and public hearings were held through October across the state.

The subject of race has been discussed numerous times throughout the process. Those opposed to the maps, including Democrats and political interest groups, claimed that the maps dilute minority voting by splitting up districts in certain areas, and that the new districts combine areas with nothing in common.

Opponents say the maps also split up several urban areas or well-established areas like the Triad, the Triangle, and Wilmington, and include them with more rural areas, thus, splitting up voters by race and ethnicity.

A lawsuit had already been filed before the maps were even voted on. Last Friday, the Southern Coalition for Justice filed a lawsuit on behalf of the North Carolina NAACP and Common Cause against Moore and Senate Leader Phil Berger in their official capacity as legislative leaders, along with the chairs of the House and Senate Redistricting and Elections committees, and members of the N.C. State Board of Elections.

The lawsuit objects to the map-making process because it does not consider race as a factor in drawing boundaries. However, the legal decision from litigation over prior maps set conditions for the map process, according to Sen. Paul Newton, R-Cabarrus.

"They litigate to limit our use of racial data, and now they are litigating saying we should," Newton said to the Senate chamber. "The General Assembly can't draw districts using race due to the Voting Rights Act unless they satisfy the three Gingles preconditions: a reasonably compact majority/minority VAP [voting-age population] district, a politically cohesive minority community, [and] white bloc voting usually defeating that community's candidate of choice."

"We reject the notion that we should flout finding precedent and clear guidance from the court, even when facing a lawsuit from a litigious group that developed some of the very guidance that it now asks us to ignore," said Newton.

"The Assembly did the proper thing and said they wouldn't decide things on race at all," said Paul "Skip" Stam, a former Republican representative from Apex. "Now they [Democrats] are complaining about that. When they get their heads together, that will be a good thing. It's always an after-the-fact determination if it was too much or too little that has nothing to with race. It has to do with whether they can win or not."

Meantime on Tuesday evening, the N.C. Senate passed a bill that creates a new congressional map for the state. That new map designates a 14th U.S. House district for the state, after the 2020 census showed enough of an increase in population to give North Carolina an additional representative in Congress. State senators are expected to vote on their own district map later this week, while the House is likely to vote on the congressional map Wednesday.
Go Back