National partisan group drives opposition to district maps in N.C., other states | Beaufort County Now | The N.C. House passed its district map proposal during evening sessions Tuesday, Nov. 2. The Senate is expected to vote on the N.C. House district map on Thursday. Redistricting maps do not go before Governor Roy Cooper, a Democrat, driving pressure on the legislative process by opposition groups. 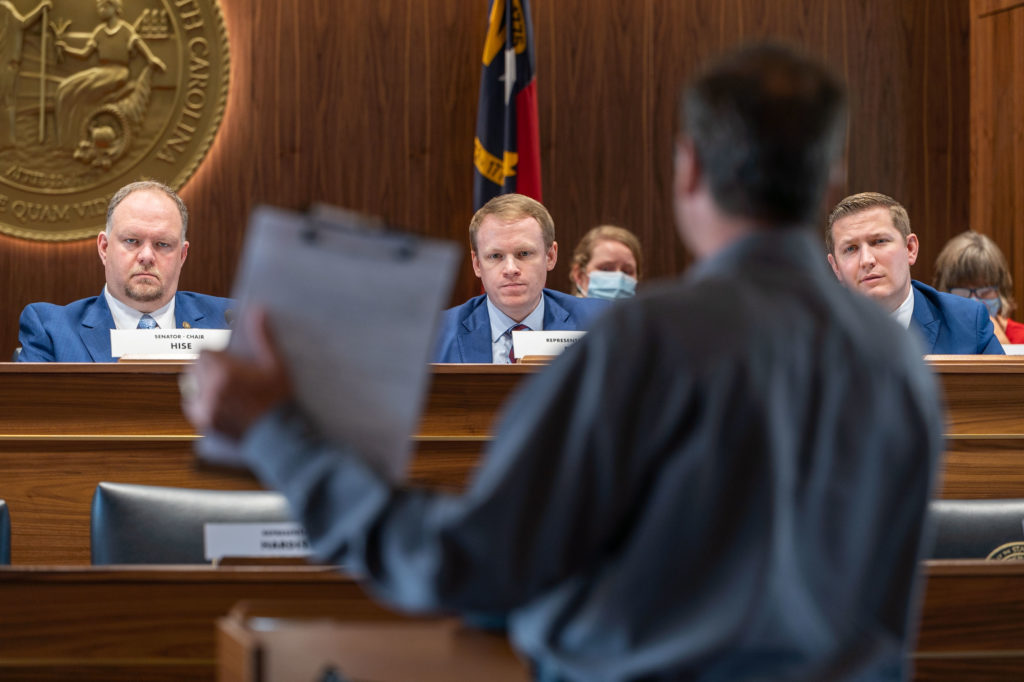 The N.C. House passed its district map proposal during evening sessions Tuesday, Nov. 2. The Senate is expected to vote on the N.C. House district map on Thursday. Redistricting maps do not go before Governor Roy Cooper, a Democrat, driving more pressure on the legislative process by opposition groups.

The maps were drawn after more than a month of hearings across the state. The map-making process itself was available through a daily live stream from a workroom on the legislative complex. There, lawmakers would go to test district shapes within view of cameras recording everything live.

Despite the public nature of the process, redistricting committee chairman Destin Hall, R- Caldwell, pointed out on the House floor Tuesday that Democratic members in the House failed to use the public room or participate in the map-making process to the degree they have in past redistricting efforts, relying instead on the arguments of speakers during October's public hearings.

"I was disappointed to see that not a single Democrat House member put forward a map to be considered," said Hall.

About two-thirds of those speakers who addressed lawmakers during the public redistricting hearings represent left-leaning, or progressive, political interest and advocacy groups, although most did not identify themselves at the podium that way, choosing instead to identify by name and county only.

An examination of the speaker lists shows the majority of speakers represented nonpartisan and partisan political organizations, including the N.C. NAACP, the New North Carolina Project, the N.C. Association of Educators, and the Southern Coalition for Justice, which has already filed a lawsuit over the maps under consideration. Other speakers included county Democrat party leaders, Democrat community activists, and former Democrat candidates for the state legislature.

Their messages were consistent not only with each other but with the public comments offered at similar redistricting hearings in other states.

That is not a coincidence.

In 2016, former President Obama's attorney general, Eric Holder, started an advocacy group called All On The Line, a 501c4 political action arm of the National Democratic Redistricting Committee, chaired by Holder. Holder's group is driving an all-out push to influence congressional and state district maps ahead of the 2022 election. Their focus is on North Carolina, Wisconsin, Pennsylvania, Texas, Florida, Ohio, Arizona, and Colorado.

"All On The Line is being disingenuous, pretending to be a nonpartisan anti-gerrymandering organization when they are really a partisan tool of the Democratic Party," said Dr. Andy Jackson, director of the Civitas Center for Public Integrity at the John Locke Foundation.

While their tactics include recruiting volunteers and expensive media campaigns, one of the most powerful tools they're using to influence the redistricting process is training people who sign up to speak at hearings held across North Carolina. That training is offered through Facebook, as well as in-person, and focuses on specific points they encourage speakers to make, identifying themselves as a group that's opposed to gerrymandering. They are also training speakers in other states in the process of redistricting after the 2020 census.

"We are here today to help you to effectively participate in that process," said Lekah Shupeck in kicking off a Sept. 20 Facebook training session, held before the public comment event that lawmakers scheduled at Western Carolina University. "I see some of our Planned Parenthood folks here, so that's exciting for me," she added.

In a video on AOTL's Facebook page with more than 400 views, Shupeck went carefully through slides advising participants on language, how to present themselves, and how to recruit others in opposition to Republican-drawn maps. When several speakers veered from the training during the actual hearing, Shupack went back on social media to urge them to stick to the talking points. AOTL messaging and advice are consistent across states and consistent with legal filings against Republican-led legislatures.

"While most progressive groups involved in the redistricting process can legitimately say that they are nonpartisan, AOTL cannot make that claim. It is a wholly-owned subsidiary of the National Redistricting Action Fund, a 501c4 that functions as the 'advocacy and lobbying arm' of Eric Holder's National Democratic Redistricting Committee (NDRC)," said Jackson.

All on The Line has been waging battle in Wisconsin, too. There, Gov. Tony Evers, also a Democrat, has said he won't sign the state maps that the GOP-led Assembly is working on. Much like North Carolina, Democrat groups are driving Wisconsin's crowds to public speaking engagements objecting to on the maps. Republican lawmakers are pushing back.

"Democrats have a problem winning in much of Wisconsin because your agenda is clearly out of step with the reality for most of Wisconsin," Wisconsin Assembly Speaker Robin Vos said. "The frustration of not being able to win elections shouldn't be blamed on maps."

Groups whose representatives spoke at the public hearings are already involved in the latest lawsuits filed over the maps. The Southern Coalition for Justice filed its lawsuit days before the first votes on the maps were held in the state's most recent redistricting process. The lawsuit accuses Republican lawmakers of violating the Voting Rights Act because they did not use race as a factor.

"It's unfortunate that litigation has already begun ... before the maps have even been finalized," said Becki Gray, vice president of Government Affairs at the John Locke Foundation. "It seems the process to ensure integrity and trust in the system is undermined by a few dissatisfied-no-matter-what factions, making the process nothing more than a political football."

The N.C. House maps are not subject to approval by Democrat Gov. Roy Cooper but will face a vote by the Senate. The N.C. House is expected to vote on new congressional maps Wednesday, Nov. 3, after the Senate approved them Tuesday evening. The new congressional maps realign districts for U.S. Congress to include an additional 14th seat, earned by North Carolina after the 2020 census showed increased population since the count 10 years ago.
Go Back