House, Senate pass new state budget; heads to Cooper’s desk | Beaufort County Now | The last puzzle pieces of a new budget are finally coming together, as both the House and the Senate passed the $25.9 billion budget for the biennium. It is now headed to Gov. Roy Cooper, who announced earlier this week that he intends to sign it.

Published: Sunday, December 5th, 2021 @ 9:01 am
By: Carolina Journal   ( More Entries )
Publisher's Note: This post appears here courtesy of the Carolina Journal. The author of this post is Theresa Opeka. 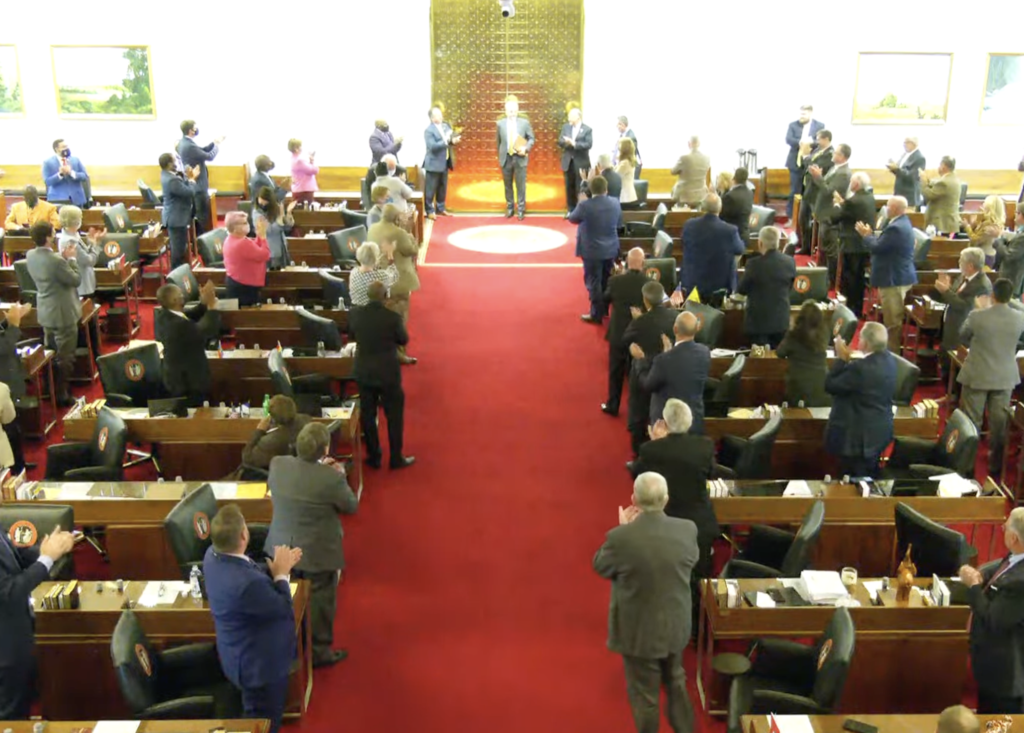 The N.C. House votes to pass the Appropriations Act of 2021 , as members applaud staff for their work on the budget. November 17, 2021. Image from livestream


The last puzzle pieces of a new budget are finally coming together, as both the House and the Senate passed the $25.9 billion budget for the biennium. It is now headed to Gov. Roy Cooper, who announced earlier this week that he intends to sign it.

Both chambers passed the budget by veto-proof majorities. The House voted for final passage 104-10 Thursday, Nov. 18, with all Republicans and 40 Democrats, including House minority leader Rep. Robert T. Reives, D-Chatham, voting in favor.

The Senate voted 41-7 for the budget on Wednesday, Nov. 17 with seven Democrats on board, although Senate minority leader Dan Blue, D-Wake, voted against it.

"I think there is there no question that everyone in this room is here because they love North Carolina. They love their community, and they want to do what's right for their community. There are things in this budget that I don't like, but this is an extraordinary budget for an extraordinary time," said Rep. Donny Lambeth, R-Forsyth.

Democrats spoke in favor of the budget on the House floor, urging their colleagues to drop partisan differences and vote "yes."

"This budget is a historic work of bipartisan compromise. I would ask you to vote your conscience. I intend to vote yes and urge many members to do the same," Rep. Gale Adcock, D-Wake said.

Much of the money in the appropriations bill goes to long-overdue repairs to the state's buildings and infrastructure, including $150 million to remove lead paint from schools. Every county in the state receives funding from this bill.

"With water and sewer infrastructure in this budget, we are going to give small communities an opportunity to have new water and sewer lines," House majority leader John R. Bell, R-Wayne, said. "Some haven't been replaced since the '20s and '30s. This budget makes sure that all 100 counties are broadband capable. There is nothing bigger to access to care in rural North Carolina than the new Brody School of Medicine. It's transformative."

Bell also mentioned items in the budget that make North Carolina, "the most military-friendly state in the country."

Once Cooper signs it, this is the first budget the state has had since 2018.

"The budget that has passed today and will be signed by Governor Cooper is the product of much time, hard work, and the invaluable contributions from our appropriations chairs, members of both chambers, the governor, stakeholders, and staff," said House Speaker Tim Moore, R-Cleveland. "The significant investments made in this spending package demonstrate to all North Carolinians that we see these needs and are meeting them where they are at."

Among the highlights are tax cuts, including lowering the personal income tax rate from 5.25% to 3.99% over six years and phasing out the corporate income tax beginning in 2025 and ending in 2031. Tax cuts were one of the priorities for Republican leadership over the past decade and a point of contention for Democrats.

The budget contains an increased standard deduction that increases the number of people in the state's lowest tax bracket for those who make $25,500 or less. An increase in the child tax deduction to $500 per child was also included.

Military pensions are also exempted from state income tax in the budget. North Carolina has the fifth largest military population of any state, with eight major installations that provide $66 billion in impact to the state economy annually.

Medicaid expansion, something that Cooper and Democrats wanted, wasn't included, but the budget does extend postpartum benefits and increases funding for home and community-based service enhancements.

In an effort to soothe some of the Medicaid expansion concerns, Cooper has cited for previous budget vetoes, a Joint Legislative Study Committee on Access to Healthcare will be created. It will be directed to study and report a bill to the General Assembly in the 2022 Session on Healthcare Access and Medicaid Expansion.

Some further points to look at what's proposed for education:


Another important item in health care includes the addition of 1,000 Innovations Waiver slots to serve the intellectually and developmentally disabled. More than 15,000 families qualify for the program, but many wait years for help. The additional slots have been in previous budgets vetoed by Cooper.

Regarding infrastructure, the budget includes $1 billion in new federal funding to the state's broadband expansion initiatives, $5.9 billion in state funding over the biennium in the State Capital and Infrastructure Fund, providing funds to build, repair, and renovate state, university, and other capital assets, and authorizes $878 million in capital projects for state agencies.

Beyond funding, some policy issues made their way into the budget. Revisions to the governor's emergency authority would go into effect after Jan. 1, 2023. This was part of the original Senate budget bill from this past spring and is a direct response to Cooper's emergency declarations over the past 20 months due to the pandemic. Those orders included restricting people's movements, limiting gatherings, shutting down businesses and schools, and setting curfews. The revision would require such orders to get approval from the Council of State after a set period. The Council of State is a group of 10 statewide elected officers, including the lieutenant governor. Cooper indicated in his announcement this week that he may fight those policy measures.

"However imperfect this budget is, our schools, communities, small businesses, our families, need help right now, especially as we recover from this pandemic," Cooper said Tuesday. "I will sign this budget because of its critical and necessary investments, and I will fight to fix its mistakes."

A new budget should have been in place when the new fiscal year began July 1, but the first offer from the House and Senate was sent to Cooper in late September. However, many of the priorities and proposals were vetted through the House and Senate budgets throughout the months-long process.

North Carolina hasn't had a new budget since fiscal 2018-19. Cooper has vetoed every Republican-backed budget since he took office. Insiders in the legislature say the governor's office has been closely involved in this year's budget negotiations, and that there are likely the available votes among Democrats to pass the budget by a veto-proof majority.

The budget now goes to Cooper's desk. He's expected to sign it Friday, Nov. 19.
Go Back