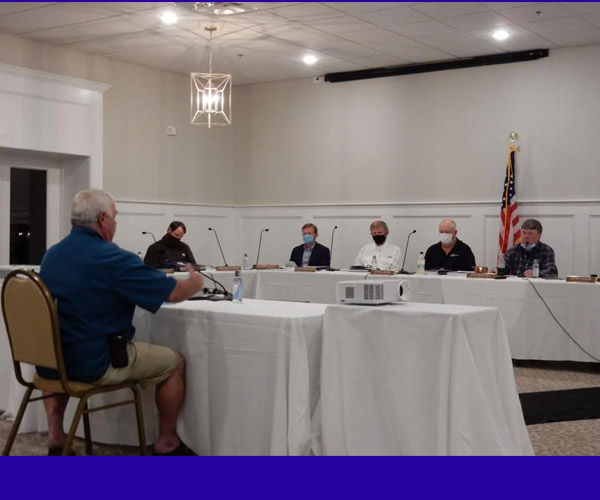 State fisheries managers have chosen their preferred shrimp trawling regulations, which leave out many area closures the N.C. Division of Marine Fisheries recommended.

The N.C. Marine Fisheries Commission held its business meeting Wednesday, Thursday and Friday at The Islander Hotel & Resort in Emerald Isle. During the meeting, the commission selected its preferred management options for the Shrimp Fishery Management Plan Amendment 2.

The amendment, particularly recommended closures, has faced considerable opposition, including from commercial shrimpers, consumers and government officials. The DMF recommended to the MFC a suite of management measures that included closing 315,206 acres of coastal waters to shrimp trawling to reduce bycatch. Combined with existing areas closed to trawling, the division recommendations would have closed 62.1% of the state’s estuarine waters to such activity.

The MFC’s preferred management measures do include some area closures to trawling. If given final approval, the measures will permanently prohibit all trawling in crab sanctuary areas and also prohibit shrimp trawling in Bogue Sound and its tributaries, as well as in Carolina Yacht Basin, except for the Atlantic Intracoastal Waterway in both areas.

At the public comment period Wednesday night, 45 people spoke, with an additional 10 during the Thursday morning public comment period. The majority of these speakers were opposed to the DMF’s recommendations, alleging there’s no scientific data to support widespread closures to shrimp trawling and that it would severely affect the commercial shrimp industry, putting many smaller fishermen out of business.

State Sen. Bob Steinburg, R-Chowan, was present at the meeting Wednesday and spoke during public comment. The senator, who sits on the South Atlantic Fishery Management Council, called the DMF’s recommendations “death by a thousand cuts.”

“You need to be thinking about and representing everyone,” Sen. Steinburg said.

“Many families up and down the coast rely on shrimpers,” Mr. Chadwick said. “The totality of the impacts (of the proposed closures) is more than many commissioners would like to admit. If you fail these working watermen, you’ve also failed the eastern North Carolina consumer.”

“If you want to get rid of all the shrimpers in Carteret County and eastern North Carolina, you’re going to do that,” he said. “You’re going to put the seafood places and restaurants out of business.”

Many who spoke were commercial fishermen or seafood dealers. Among them was Kenny Rustick of Marshallberg.

“Somebody needs to be held accountable (for declining fish stocks) besides commercial fishermen,” he said. “You can’t go (shrimping) in the ocean, the shrimp aren’t there.”

N.C. Fisheries Association Executive Director and commercial fishermen Glenn Skinner said the goal of an management plan is to “ensure the viability of a fishery through long-term management.”

“Restoration and protection (of the resource) is an important factor, but it’s not the only one you’re supposed to consider,” he said. “The hypocrisy displayed in recent years by this commission is sickening.”

“Without proper data, you can’t close anything down,” he said.

Former DMF Director Dr. Louis Daniel also spoke. Dr. Daniel said the proposed measures in Amendment 2 would force small boats to go out on open ocean waters in competition with larger vessels, posing a threat to the lives and safety of everyone involved.

“Your job is to protect our natural resources,” Mr. Sneed said. “That will inevitably require tough decisions.”

Dr. Elkins, meanwhile, said the amount of bycatch in shrimp trawling is “obscene” and more consideration is needed for protecting the resources for recreational fishermen.

“There’s a difficult balance to strike here between maintaining access to a resource and to protect one of the best natural resources on the Atlantic Coast,” she said.

“If we don’t have a compelling reason to make this drastic change, it could devastate our economy,” he said. “We’ve got 1 million acres closed (to shrimp trawling already), and we’re proposing to close 492.5 additional square miles. We’re closing it down completely for no good reason.”

“We hear a lot about how North Carolina leads,” he said, referring to several statements speakers made that the state is a leader in the U.S. in shrimp bycatch reduction. “Well one way we lead is by access for our (commercial fishing) fleet to that natural resource. I think this amendment is a good compromise.”

CORRECTION: This article was corrected at 9:40 a.m. Friday, Nov. 19, 2021, because Dr. Louis Daniel was incorrectly identified.