For Cam Newton, learning a new offense is a process | Beaufort County Now | Because he's a courteous person, Panthers quarterbacks coach Sean Ryan apologizes, since it might appear rude if he glances at his phone.

For Cam Newton, learning a new offense is a process 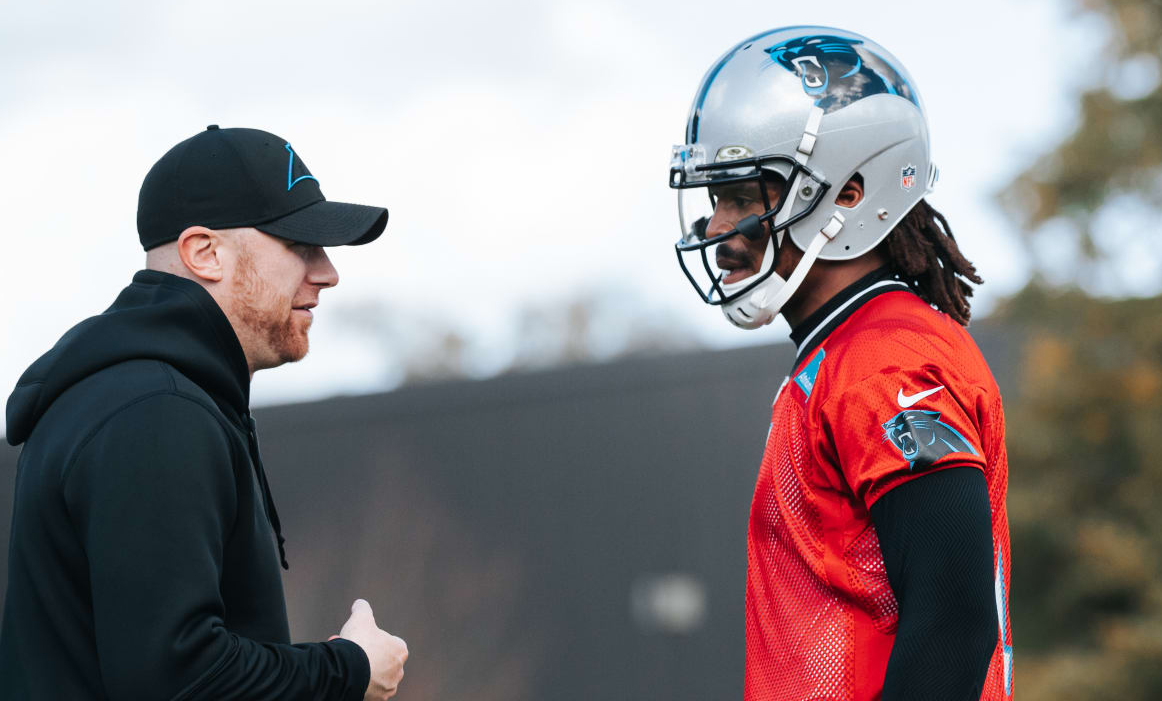 CHARLOTTE     Because he's a courteous person, Panthers quarterbacks coach Sean Ryan apologizes, since it might appear rude if he glances at his phone.

It's just that he's waiting on a message about his next meeting. He's had a lot of meetings lately. And there are a lot more ahead. And they're pretty important.

Ryan's getting to know new Panthers quarterback ﻿Cam Newton﻿ well this week, or at least as well as you can know someone you had never met until 10 days ago. The first three days of that was a whirlwind, which led to another chapter of Newton's mythology in Arizona when he scored touchdowns on his first two snaps. Now they're settling into something resembling a relationship, and that takes time. So as Ryan had a few moments between his sessions with Newton this week, he explained a little about the process of catching Newton up, and changing a tire on a moving car.

"It always has to start at a personal level. But obviously, when he gets here last week, the first real meeting I have with him is on Friday and you play on Sunday. There's only so much personal you have time for."

The more they talk, Ryan will learn about Newton's kids, where he stays in the offseason, what he likes to do when he's away from work. But for now, it's mostly football. A lot of football. Intense football. Football from the ground up.

"You've got to coach from the huddle to the ball," Ryan said. "Everybody talks about learning plays and concepts, and that's all true, but the guy's never been in our huddle. So you start with the general information section of the playbook. How we huddle, our terminology. Some concepts will be familiar to players because they've seen them in different places, but it has a different name.

"So we start with general, these are our words for it. This is how we line people up. Sometimes there's carryover, sometimes there's not. This is our cadence, to get the ball snapped. That's the starting point, the personal level and just the basics of the offense, just to get to function. Then here's the concepts we think we can get done in the next 48 hours, with him, that maybe we'd have a chance of executing on Sunday."

Those few concepts clearly worked last week, but it wasn't easy getting there.

Newton laughed as he delivered one of his patented one-liners after the game, when he was asked how much of the Panthers' playbook he knew before the Arizona game.

"Two touchdown's worth," he said with a grin, knowing he nailed that one as well as he had the Cardinals' goal-line defense.

But getting to that point was not simple.


Quarterbacks who have done similar things before tell a similar story. It's impossible to eat the entire elephant in a week, so you try to chew on as much as you can as quickly as possible. It would help if the new offense is in a language you speak, but that's not always the case.

NFL offenses used to be more rigid. If your offense came from a Don Coryell background, your offense was built on a number system. If you were running a Bill Walsh-style West Coast Offense, you might call it something completely different and might sound way more complicated. But as the league has evolved, the differences between types of offenses have softened, even if the terminology hasn't.

But when you've been around enough of them, you see patterns emerge.

Former No. 1 overall pick Vinny Testaverde, who somewhat famously joined the Panthers on a Wednesday and started on a Sunday in 2007, learned a lot in his 21 years in the league.

"The key is to not be so anxious about it when you walk into a new setting," Testaverde said. "It's just learning a new language. I don't know German, but I know what a slant and a flat are, so it's just a matter of figuring out what these guys call it."

When he joined the Panthers on short notice, Testaverde was mostly handing the ball off and dumping short passes, as he was meeting a new cast of players and a new coaching staff with limited practice reps. But he did unload a 65-yard touchdown pass to Steve Smith, showing he still had plenty of arm.

But his familiarity with the entire encyclopedia of NFL offense obviously helped.

When his days with the Panthers were over, he spent a year with the Browns under Brian Daboll. That gave him a taste of the Erhardt-Perkins offense the Patriots scheme was founded in, after his years of success in a Coryell-based system under Dan Henning here. He started his career in New Orleans with Mike McCarthy, learning West Coast principles. But when the Houston Texans needed help in a hurry in 2011 (after injuries to Matt Schlub and Matt Leinart), he was shocked by how different their playbook was.

"That was the most difficult cramming process of my entire life, because I had never run any Gary Kubiak/(Mike) Shanahan offense," Delhomme said. "It was very difficult to pick up, because it was just a different volume of verbiage. That was a whole different baby."

Delhomme said that in his first week, he probably knew about 20 plays he could functionally run, and if you ran them to the left or right, that made it 40.

For Newton, the Panthers narrowed the scope of what they asked of him, putting in a small package of goal line and red zone stuff that catered to his strength.

Every Cam Newton play from first game back in Carolina

His first play was obviously a nod to that physical strength, as he stiff-armed and went over a couple of Cardinals defenders en route to the end zone. But they also had a small group of passing plays he was familiar with, and that touchdown to ﻿Robby Anderson﻿ proved he picked up the stuff he knew quickly.

Now, it's a matter of building progressively, finding things he's more familiar with in his background, and developing those themes.

While Newton wasn't eager to draw comparisons to anything past (especially with his old coach Ron Rivera coming in this week), he seemed to acknowledge that learning a whole new system in New England last year could have helped with this process he's going through now. If not the particulars of the Patriots' system, the act of learning new tricks was beneficial.

Both Testaverde and Delhomme agreed that the time with Bill Belichick would help.

"It's great exposure for any quarterback to go to New England, to learn their system, because it helps you with whatever else you have to learn," Testaverde said.

Delhomme said it's not as much about any particular play-calls they had, but the way they teach. He learned that during his time with Daboll, a former Patriots assistant who is now the Bills offensive coordinator. Daboll's first two years with the Patriots were as a defensive assistant, before he moved to receivers and tight ends.

"For Cam, it's not about the Patriots offense; it's about what the Patriots taught him about defenses," Delhomme said. "They train their coaches on the opposite side of the ball so that they can learn weaknesses of defense, how to pick up on certain coverages, the keys and tips in the red zone, and how to challenge that stuff.

"That can open your eyes to a whole different kind of football."

And according to Ryan, Newton's eyes are wide open, around the clock.

After the long overnight flight home from Arizona, most players were out by mid-afternoon on Monday. Newton was still in the office long past dark, meeting with Ryan and offensive coordinator Joe Brady to get caught up.

They've done a combination of work on the practice field, in the classroom, on video, and using the team's 8K wall (a giant projector that beams opposing defenses onto the wall, which allows you to effectively do a walk-through indoors).
Go Back