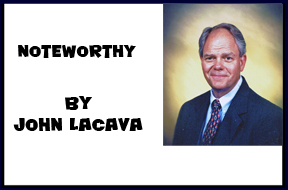 In Irving Stone’s book “Men to Match my Mountains” there is a rather sad reference to public education:  “Virginia City’s first attempts at public education were cut short by recalcitrant pupils shooting the teachers.  Now, a new teacher was hired out of the “Rowdy Fund,” set up by a pair of penitent drunks who in front of a full audience had ripped to shreds with their knives the Comstock’s first theatrical curtain. No one gave pale, slight Harry Flotz, a discouraged prospector going back to his first love, school teaching, more than one day, but Professor Flotz arrived in class with three Navy revolvers and a Bowie knife. During geography Flotz heard a whisper; like lightning one of his revolvers was trained on the offender. “Don’t do that again, he said quietly. I never give a second warning”.

We are not there yet, but make no mistake, without individual self-discipline we are not far from it. There is an uproar in this country due to the proliferation the “Junk Education” being foisted upon our public school children. They are slowly being turned into ideologues and snitches. This has been foreseeable ever since the atheist and socialist John Dewey put his stamp on public education in the early twentieth century. Public schools have slowly drifted from institutions of academic and civilized institutions into social institutions that perpetuate the latest social ideology.  Academic content knowledge among the current teacher force is at low ebb and until the uniperversities change course this will continue to be true. For that reason, I intend to run for a position on the Beaufort County School Board.

This is what the public schools should teach.

Ethics – Too late to teach these when a child has reached adolescence.

Manners – A relic of the past or something a civilization can’t do without?

Morals – Try emulating the standards of the service academies.

Self-discipline – Without it one invites external discipline.

Civics – Teach the founding documents rather than multiculturalism and diversity.

The English Language – Written and spoken. No exceptions.

Math – No hybrids, the real truth.

Sciences – Rely on the intellect of the past geniuses.

Vocation – Prepare students to be productive rather than disruptive.

Dance – Not what passes for dance in the snake pits of society.

Literature – Free of the profane and mystical.

Music – The second largest body of written emotional communication in the world.

Visual arts  - Free of the profanity and drivel of the mentally ill.

Competition – Generally brings out the best in people.

Fitness – We need to be more like the Spartans of Greece.

Individual sports – Tennis, golf etc. Fun that can follow you through life.

Intramural team sports – How to function as part of a group.

Teams by tryouts – So that students can use their individual gifts.

A community of free people cannot survive without virtue and a social compact.

Because there are an awful lot of liars out there who resent the truth because it doesn’t fit with their God-like, vain, utopian view of the world.

Fitness is stressed in our military academies.

After drug abuse, obesity is a serious national problem especially among our youth.

It is my belief that all school administrators should have an advanced degree in one of the many academic disciplines.  Degrees in Education just perpetuate the same old BS. In addition to that, every administrator should be required to teach at least one class a day before they forget what it’s like.

Academic standards have slipped so far in this country that we don’t even rank in the top 20% of the world in any subject. How pitiful is this when we spend as we do on education? We have standards that serve the lowest common denominator rather than standards that children need to strive for thus elevating their intellect. The goal isn’t A’s but increased knowledge.

Children learn in many ways. They use all their senses but usually one sense is stronger than another. Why do we not match a teacher’s teaching style to a student’s learning style?

For too long schools have been turned into models of the political bureaucratic institutions that serve the bureaucrats (administrators, unions etc.) not the students. The needs of children in a civilized society come before the convenience of the bureaucrats. IT”S TIME FOR A CHANGE.