Modems removed from voting machines in five N.C. counties | Beaufort County Now | The N.C. State Board of Elections recently removed analog modems from voting equipment in five counties, a move that has drawn criticism from the N.C. House Freedom Caucus. 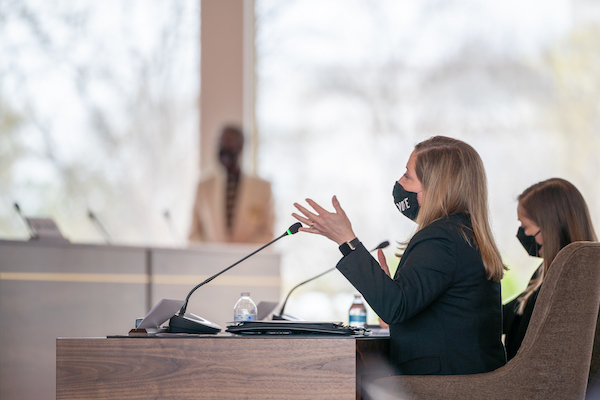 State Board of Elections Director Karen Brinson Bell, at a hearing in an N.C. Senate committee. (CJ photo by Maya Reagan)


The N.C. State Board of Elections recently removed analog modems from voting equipment in five counties, a move that has drawn criticism from the N.C. House Freedom Caucus.

The Freedom Caucus - 25 House members chaired by Rep. Keith Kidwell, R-Beaufort - has sought for months to inspect voting equipment to check for internet connections, most recently in Durham County.

News that the state elections board has removed modems from voting equipment in Watauga, Graham, Macon, Montgomery, and Swain counties drew a stinging rebuke in a statement from the caucus, which claimed that the elections board "has stonewalled and denied access to voting equipment, as well as even acknowledge the existence of modems in North Carolina voting machines."

The counties in question had used M100 ballot scanners created by the voting machine manufacturer Election Systems and Software, or ES&S, and purchased from the N.C.-based company Printelect. According to a Dec. 10 memo from the elections board, the M100 machines contain "obsolete analog modem hardware" that requires a connection to a telephone.

On Nov. 9, state elections director Karen Brinson Bell hosted a Microsoft Teams virtual meeting with officials from the five counties to inform them that Printelect would be conducting preventative maintenance on the machines and would remove the modems. As of mid-December, all modems had been removed from the machines.

"It was not possible for any individual to connect to these antiquated modems before their removal, and they are no longer present in any voting machines in North Carolina," according to the elections board memo. "Furthermore, any use of modeming was halted upon the enactment of the law prohibiting modems and coding for modem use was discontinued, making it impossible for results to be transmitted."

"This decision was aimed at avoiding any opportunity for people to spread misinformation about the integrity of elections in those five counties," said elections board spokesperson Patrick Gannon in a statement emailed to Carolina Journal. "The state board has provided all information requested by the caucus. Any suggestion that the state board has misled the caucus is frankly baffling."

Members of the Freedom Caucus said they plan to continue pushing to ensure that voting integrity is upheld in the state.

"I simply want to make sure, as a representative of the people, that the peoples' votes are counted - that every legal vote gets counted, that no illegal votes get counted, and our equipment and systems are absolutely protected from infiltration from anybody outside of the state of North Carolina or anyone who would cause harm to our election process," said Kidwell. "This is the United States of America, the greatest republic to ever exist on the planet, and the most sacred possession we have as Americans is our vote."

"The Freedom Caucus will continue to pursue every avenue to secure our elections," said Rep. Bobby Hanig, R-Currituck, vice chairman of the Freedom Caucus, in a statement. "We want to be sure that every legal vote is counted, that no illegal votes are counted, that our election is protected from any outside influence, and that our voting systems cannot be jeopardized or compromised via the internet."
Go Back