Down with The Struggle: Walter Dalton, soul brother #1 | Beaufort County Now | There's nothing like the whitest white man on the planet Earth complaining that someone else doesn't get "the black experience."

Down with The Struggle: Walter Dalton, soul brother #1

There's nothing like the whitest white man on the planet Earth complaining that someone else doesn't get "the black experience." But that's what we were treated to last night in the televised "Shootout at the Mediocre Corral," a/k/a the North Carolina gubernatorial debate between Democrat Walter Dalton and Republican Pat McCrory:

At times, the debate turned nearly caustic - such as when the subject of race relations was raised. The topic was a Dalton online ad featuring several African-American legislators. In the ad, the legislators criticized a McCrory ad as insensitive because it featured former Wilson County sheriff Wayne Gay - who blamed black voters when he was defeated. The Dalton ad quoted people saying that McCrory "just doesn't understand the African-American experience in North Carolina."

"We need someone who brings everybody together," Dalton said.

"It's the low point of North Carolina politics," McCrory said. "I didn't think it could get any lower with some of the things that Gov. Perdue did. But that YouTube ad is not something that is going to bring people together." (McCrory lost to Democrat Bev Perdue in 2008).

McCrory said he treated people as individuals, and he noted that he had mentored a young black man, who is now an adult.

"It is a friendship that will be with me with all my life," McCrory said.

"I am glad he mentored that child," Dalton said. "But if he finds this (online) ad offensive, it's because he has offended."

That prompted a laugh of disbelief from McCrory. 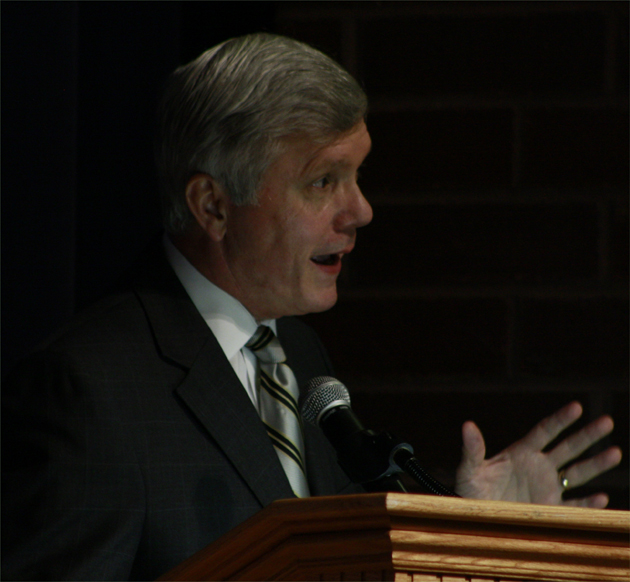 Walter Dalton: Above.     photo by Stan Deatherage
The "debate" -- if you want to call it that -- was a horrifying, pathetic spectacle. Kind of like a slap-fight between two special ed students. It would have made one heck of a Saturday Night Live skit. But, unfortunately for the people of North Carolina, these were the choices presented to us by the two major parties.

The event didn't cover much ground that hasn't already been covered in TV and online ads, or in the "Under The Dome" blog. Dalton tried hard to push the racism / discrimination argument into the discussion about voter ID:

Race also touched the issue of whether the state should adopt a voter ID bill, which passed the legislature but was vetoed by Perdue. Dalton opposes the measure; McCrory is in favor. The legislation is strongly opposed by African-Americans.

But Dalton shot back: "Sudafed is not a precious constitutional right."

But gun ownership IS. You have to show all kinds of ID to purchase guns and ammo. You have to undergo all kinds of scrutiny just to carry a gun around. WHAT is so bad, Wally, about proving you ARE who you say you ARE on election day? Read On:

Dalton said there is little evidence of voter fraud in North Carolina, but he said McCrory wants to spend millions on it.

He said World War II veterans living in rural areas would have to travel miles to get the right documentation. "I don't think he understands rural areas at all," Dalton said.

Replied McCrory: "I'll be sure to tell my colleagues and my fellow students in Jamestown and Ragsdale High School that I don't understand their needs. [...]

Ragsdale High School, huh? It's *so nice* that our mainstream media allowed stuff like this to dominate a gubernatorial debate, while our state is being rocked by record unemployment and miserable levels of economic growth.

McCrory appears to be in the driver's seat in a race dominated by hatred for Bev Perdue. Our state and its economy need some serious attention. Team McCrory seems happy with what is basically a win by default. It sure would be nice to see some serious attention devoted toward ideas about shrinking government, cutting taxes, and turning this mess around.
Go Back