A Masked Joe Biden Shuffles Onto the NACo Legislative Conference Stage, and Into the Hearts of Leftist Attendees

Login to Send a Private Message to Stan Deatherage
Publisher's note: This post was first published in late Winter 2022, and is as topical now as it was then, alsmost comical if you can find fun in what constitutes a Presidential Fool, which Corrupt Joe Biden has surely proved NOW.

At this tremulous time in America's history, where non patriots control the Executive Branch from top to bottom, no exclusions, I am most happy to provide my first hand knowledge of what I saw; what I see of this Fool President, and the Democratic Socialist hacks that put him in this delicate position under their maniacal control.

Democratic Socialist place holder president, Joe Biden, visited a mostly far Left composite of this nation's county commissioners and spoke deeply to their Democratic Socialist hearts. Of course little news was made other to confirm to anyone with a modicum of real intellectual thought that this Puppet President is a true first - America's First Idiot President. 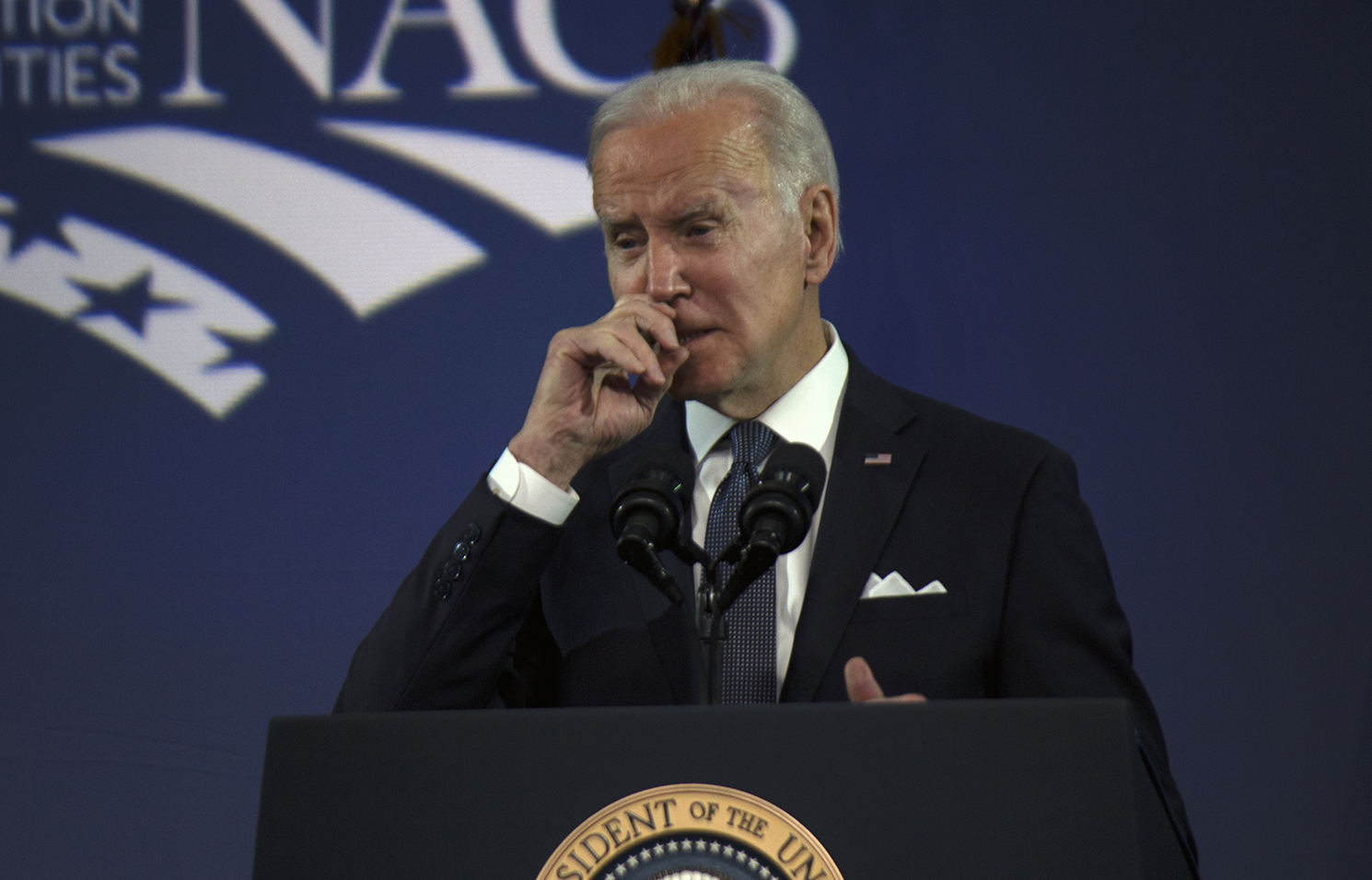 Joe Biden connects with many "like minded" local officials: Above.    photo by Stan Deatherage    Click image to expand.

From his opening story about being a "county councilman," in his beloved Delaware, rising on one occasion to place a 'dead dog on a Republican's front porch' to later, in his usual style of words without reality, this poor presentation of a president boasted how he had 'reduced the Mighty Deficit by 300 billion dollars', by simply wasting enough of the People's money on his convoluted Democratic Socialist Covid Strategies to do so; in actuality, costing trillions of the public's real dollars. This transformational passage from the bogus of the unreal to this Biden of the Bizarre is something that one should never get use to. That last fiscal remark of ripe ridiculousness earned an unforced gasp of an exclamation from this reporter: "What group of fools would believe this idiocy." Later, I discovered my uttering was probably overheard (Also, I yelled out: "Put Your MASK ON!" when Joe the Tool started to shuffle, mask-less, to stage right when done with his foolish words.), prompting a commissioner from urban Colorado, who obviously does 'believe that idiocy,' to seek me out after the Biden Carnival Manifesto, far from the center stage area, 35' back from the podium, then, to later after the Mr. Magoo freak show, where I did work on my computer at one of the many dining tables towards the edge of the great ballroom until my next attended event.

Commissioner from Colorado: "Where are you from?"

Commissioner from Colorado: "Colorado (but not a true Colorado accent did I detect, not even close). You don't care much for 'our' president, do you?"

Commissioner from Beaufort County: "No ma'am, I do not."

Commissioner from Colorado: "HMMPH!" (storming off)

The true "Believer" from Colorado notwithstanding, I did well discover that those "fools that would believe this idiocy" were a great propensity of the sparse crowd within the famous ballroom of the Washington Hilton; that location, just about one hundred steps away from where President Ronald Reagan was infamously shot by John Hinkley, Jr. in 1981 after a speech in that same ballroom. Accordingly, that crowd of county commissioners - this February 12, 2022 afternoon - was decidedly Democratic Socialist in nature after witnessing how Biden's lies and half-truths brought this elected group to its feet, and that catalyst was the constant talk by this Puppet President of the great sums of "free money" allocated to county governments. That Biden /Democratic Socialists' granting of the public's treasury is the same "free money" that your children and "your children's children" will be paying for many generations to come. This is the way I will always see governing: The public's money is never free, and comes with many strings attached; one big corded string is the current Bidenflation enjoyed by all, especially the poor, and lower middleclass.

All considered, my overarching thoughtful take-away from this NACo Legislative Conference, in retrospect, is simply this Constant Consideration of the Real: Be careful who you elect; these days are the beginning of some tough times to come; at some point, we all must be far more serious in bold maneuvers of abject wisdom concerning our collective future as a continuing Republic.


Judge for yourself as America's top politician speaks in a Socialist tone to your local governing leaders that have and will waste the funding of the futures of succeeding generations of OUR children: Below.


Consider these NACo highlights against the extra real backdrop of Bidenflation roaring close to the disastrous 10% level, his fully non patriotic Open Southern Border and Resettlement Project, failing domestic policies of placating radical fringe groups at the expense of productive Americans, along with the multiple unforced foreign affairs blunders from the incredible Executive stupidity of the Afghanistan Debacle to the day to day mishandling now of the Ukrainian War, just to name a few of his many stupidities: Below.

Additionally, we provide the full NACo rendition of Democratic Socialist Biden speaking to many of Joe the Fool's loyal subjects: Below.