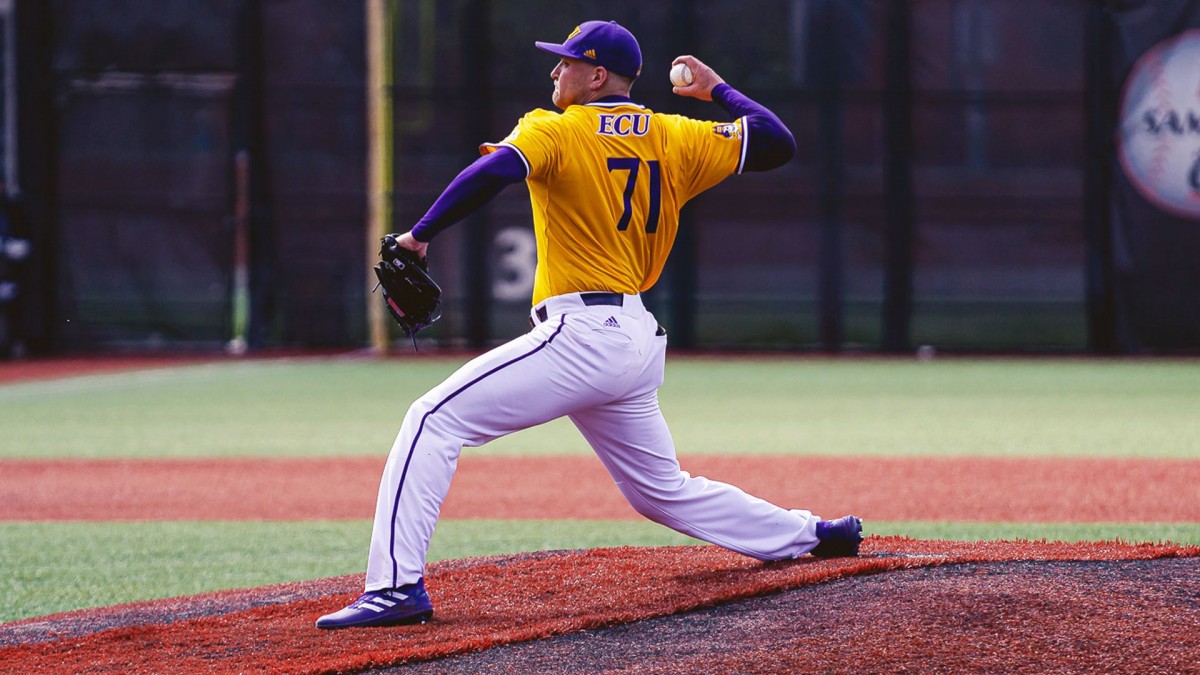 CINCINNATI, Ohio     Carter Cunningham's RBI single in the seventh inning broke a 10-all tie, while Ben Terwilliger tossed a career-high 2.2 innings in relief as East Carolina claimed an American Athletic Conference series win at Cincinnati, 12-10. With the win the Pirates improved to 16-13 overall and 2-1 in league play, while the Bearcats dropped to 10-16 and 1-2.

Agnos, who scored three runs in the game, drew a one-out walk and took third on Hoover's fourth hit of the afternoon (double) before scoring on Cunningham's base knock to left field.

Terwilliger (1-0) earned his first win as a Pirate working 2.2 scoreless frames where he retired eight of nine batters he faced with a season-high three strikeouts. Bradley Wilson got notched his first save walking two (one intentional) before getting Cam Scheler to pop out in foul territory (third base side) with the bases loaded to preserve the win. Starter Josh Grosz allowed three runs (all earned) on four hits with a walk and four punch outs in 2.1 innings. ECU would use eight additional arms in the contest getting outings from Trey Yesavage (0.2 IP, 2 Ks), Danny Beal (0.0 IP, 2 Rs), C.J. Mayhue (0.0 IP, 2 Rs, 1 ER), Garrett Saylor (0.0 IP 2 Hs), Agnos (1.0 IP, 2 Rs), Carter Spivey (0.1 IP, 1 R), Jake Kuchmaner (0.2 IP 1 H), and Jake Hunter (1.0 IP, 1 H).

Chase Hopewell (0-1) took the loss giving up two runs (one earned) in relief on five hits with two walks and one strikeout. Starter Zach Segal was touched for six runs (all earned) on four hits with a pair of walks and two hit batters in two-plus innings. The Bearcats also got used three other arms in Max Bergmann (1.2 IP, 3 Rs), Ryan Steckline (2.1 IP, 1 R) and Jackson Murphy (0.1 IP).

The Pirates jumped out to an early 1-0 lead pushing across a run in the second inning. Jacob Starling led off with a walk, took second on a wild pitch and moved to third on Jacob Jenkins-Cowart's fly ball to deep center. Bryson Worrell dropped down a sac bunt towards first allowing Starling to cross home.

ECU plated five runs in the third taking a then commanding 6-0 lead. Zach Agnos doubled to open the frame and scored on Lane Hoover's single to right-center. Josh Moylan drew a walk, which was followed by a Cam Clonch bunt to load the bases. Alec Makarewicz plated a pair with a double down the right field line and a sac fly to right by Starling pushed across Clonch. The final run came on Jenkins-Cowart's base hit to right scoring Makarewicz.

Back-to-back home runs from Joe Powell and Ryan Nicholson cut the Pirates lead in half at 6-3 in the third inning. Paul Komistek doubled to lead off the stanza and scored on Joe Powell's fifth blast of the season over the right field wall. Nicholson followed with a solo shot to right field, his seventh of the season, chasing Grosz from the game.

ECU extended its lead in the fourth scoring three runs for a 9-3 advantage. Hoover singled to kick off the frame and took second on a Bergmann balk, which was followed by Moylan reaching base after being hit by a pitch. Clonch's ground out moved both runners up 90 feet before Makarewicz singled through the right side plating Hoover. Moylan scored from third on a walk both and Jenkins-Cowart's second hit of the day plated Makarewicz from third.

The Beatcats took their first lead of the contest, 10-9, erasing its second sixth-run deficit in the fifth inning. Kerrington Cross plated the first run on a single up the middle scoring Cole Harting from second and three batters later, Wyatt Stapp laced a two-RBI base hit through the left side clearing the bases.

ECU knotted the game at 10-all in the sixth inning thanks to a Bearcat error. Starling walked with two away and scored from first on Jenkins-Cowart's third hit of the afternoon coupled with a fielding error by Harting.

Hoover's fifth base hit of the game, and RBI single to center scored Agnos from third, who tripled to start the frame, extending the Pirates' lead to 12-10.

ECU returns home for the first of four-straight games at Lewis Field inside Clark-LeClair Stadium when it takes on Old Dominion Tuesday, April 5. First pitch is slated for 6:30 p.m. (ET) and will be streamed on ESPN+.
Go Back