Who's calling the shots in the world today? | Beaufort County Now | Informed people will want to know this information

Who's calling the shots in the world today? 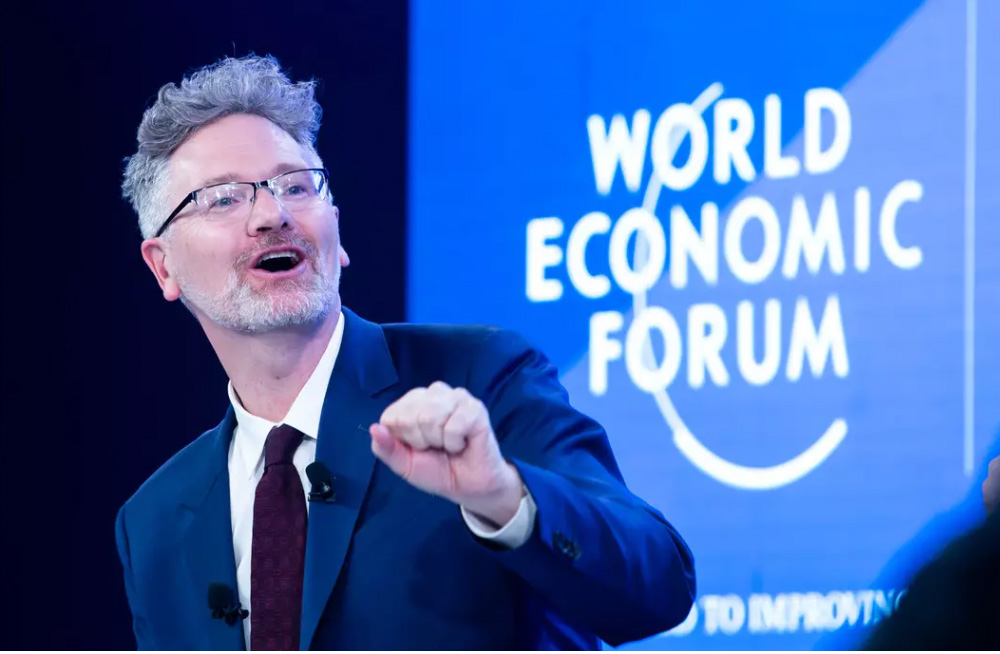 Editor's note:  If you are one who strives to be informed about what is going on in the world today, and more importantly, why what is happening is behind many of the current events, you will want to read this article by Robert Malone.  Make of it what you will.  He writes:

‘“All for ourselves and nothing for other people” seems in every age of the world to have been the vile maxim of the masters of mankind.’  Adam Smith. Chapter IV, p. 448. - The Wealth of Nations (1776) - Book III

“What we are very proud of, is that we penetrate the global cabinets of countries with our WEF Young Global Leaders. (YGL)”  Klaus Schwab (2017)

Who are the globalist members of the trade organization known as The World Economic Forum (WEF) and their servants, why should you care, and what can you do about it?

First, “who are they?”  The current 100 WEF full members (“Strategic Partners”) are drawn from the largest corporations in the world, together with their owners and managers (referred to as “Davos Man”).  The list of corporations, owners and managers who control the WEF is not disclosed and membership can only be inferred indirectly.  However, the WEF members do not act alone, but have developed various groups of globally distributed trainees who generally act in accordance with the detailed policies and positions developed and distributed by WEF leadership.  These training programs have been operating for over three decades, resulting in placement, distribution and rapid advancement of many thousands of WEF-trained operatives throughout the world.  WEF chairman Klaus Schwab has famously claimed that these operatives have been strategically inserted into key positions in various governments, as well as influential spots in key industries such as media, finance, and technology.

“Davos Man” is a term coined by former Harvard University Director of the Center for International Affairs Professor Dr. Samuel Huntington (1927-2008) to define an emerging group of economic elites who are members of a social caste which has “little need for national loyalty, view national boundaries as obstacles that are thankfully vanishing, and see national governments as residues from the past whose only useful function is to facilitate the elite’s global operations.”  The title of his prescient 2004 article published in The National Interest is telling: “Dead Souls: The Denationalization of the American Elite”.

“Davos Man is mainly white, middle-aged and European or Anglo-Saxon. Of course, some of the participants at this year's five-day meeting of the World Economic Forum in the Swiss mountain resort were Indian, Chinese, African or/and women. But they continue to be a minority. The dominant culture of Davos remains that of white western man”

Davos man has a troublesome pre-history of combining brilliance and stupidity, of being blinded by national and ideological prejudice to his own long-term interest and destroying with one hand what he has built with the other.”

Wikipedia defines “megalomania” as “an obsession with power and wealth, and a passion for grand schemes.”  It also relates this term to the following psychological terms: Narcissistic personality disorder, Grandiose delusions , and Omnipotence (psychoanalysis), a stage of child development. Davos Man fits the definition of megalomania and has acquired what he believes are the financial and political resources to try to force his obsession and grand schemes on the world, and to force you, your family, and the world to comply with his vision.

Regarding the WEF, Andrew Marshall developed a brief introductory summary which I strongly recommend reading, published in a 2015 article entitled “World Economic Forum: a history and analysis”. The membership of the WEF is divided into three categories: Regional Partners, Industry Partner Groups, and the most esteemed, the Strategic Partners. Membership fees from corporations and industry groups finance the Forum and provide the member company with extra access and to set the agenda. A full list of current Strategic Partners can be found here.

“Why should you care?” The WEF is the organization which has masterminded the globally harmonized planning, development and implementation of the lockdowns, mandates, authoritarian vaccine campaigns, suppression of early treatment options, global targeting of dissenting physicians, censorship, propaganda, information and thought control programs which we have all experienced since late 2019.  This is the organizational structure used by the ones who have sought to control and manage the world to advance the economic and political interests of their members through the ongoing “Great Reset” (as named and described by their chairman Klaus Schwab) by exploiting and exacerbating the social and economic disruption which they have artificially and intentionally crafted since SARS-CoV-19 began spreading across the world.

The musings and plans of this trade organization read and sound like the implausible sinister plot of an international spy novel concocted by a second-rate version of Ian Fleming, John Le Carre, or Robert Ludlum.  Unfortunately, they are backed by the financial resources of many of the wealthiest people in the world.  For examples of the muddled thinking and pseudo-science which these self-appointed masters of the universe proudly publish, I recommend that you do your best to read COVID-19: The Great Reset, The Great Narrative for a better future (both by Klaus Schwab and Thierry Malleret), and How to Prevent the Next Pandemic (by Bill Gates).  A detailed interactive summary of their policy positions and the interrelationships of those policies (“transformation map”) can be found here and for COVID-19, here.

“What can you do about it?”  After all you have seen and experienced since September 2019, please look in the mirror and ask yourself these two questions:

“Are these people I can trust with my future and that of my children?”

“Do they represent my interests, values, and what I believe in?”

If you decide that you cannot trust them, or that they do not share your interests and values, then it is high time to act to prevent them from taking control of all aspects of your life.  Otherwise, the WEF seeks to take away everything you own, and to completely control all aspects of your life.  One of the key predictions of their “Global Future Councils” is that by 2030, you (or your children) will own nothing, and will be happy.  Here is a link to other aspects of their vision of tomorrow.

Whatever your answer, you deserve to know who these people are that wish to control the world, your daily life, what information you can access, what you are allowed to think, and what you are allowed to own.  You deserve to know who they represent, and what are their names.  The purpose of this essay and the accompanying spreadsheet is to provide you with information and transparency about who these people are, where they come from, what their ethics and policy positions are, where they work, what sectors they work in, and when they were trained to do the bidding of the WEF (there are often close bonds between members of the same class year).

These people have been trained to believe in and support a globalist form of unelected government, in which business is at the center of the management and decision-making process.  They have been trained to advance the interests of a global transnational government which represents a public-private partnership in which the business interests of the WEF members take precedence over the constitution of the United States.  The WEF believes that the concept of independent nation states is obsolete and must be replaced with a global government which controls all.  They are fundamentally anti-democratic, and their views are both fundamentally corporatist and globalist, which is another way of saying that they are for totalitarian Fascism – the fusion of the interests of business with the power of the state- on a global scale. These people do not represent the interests of the nation-state in which they reside, work, and may hold political office, but rather their allegiance appears to be to the WEF vision of a dominant world government which has dominion over nations and their constitutions.  In my opinion, in the case of those trainees and WEF members who are in politics, and particularly those who have been used to “penetrate the global cabinets of countries”, these persons should be forced to register as foreign agents within their host countries.

Davos Man’s Servants are Foreign Agents. The full title of the US Foreign Principal Registration Act of 1938 (FARA) is “An Act to require the registration of certain persons employed by agencies to disseminate propaganda in the United States and for other purposes.”  Citing Wikipedia,

“The Foreign Agents Registration Act (FARA) (2 U.S.C. § 611 et seq.) is a United States law requiring persons engaged in domestic political or advocacy work on behalf of foreign interests to register with the Department of Justice and disclose their relationship, activities, and related financial compensation. Its purpose is to allow the government and general public to be informed of the identities of individuals representing the interests of foreign governments or entities. The law is administered and enforced (or not…) by the FARA Unit of the Counterintelligence and Export Control Section (CES) in the National Security Division (NSD).”

The Malone Institute (primarily Dr. Jill Glasspool-Malone and Anita Hasbury-Snogles), in collaboration with the Pharos foundation and Pharos Media Productions in Sweden, has invested months of time and hundreds of labor hours to mine existing and historic publicly available data sources to develop a detailed summary of graduates from two WEF training programs; the World Economic Forum's Global Leaders of Tomorrow (a one-year program that ran from 1993 to 2003) and Young Global Leaders (a five-year program started 2004/2005 and still running).  Pharos foundations’ summary can be found here. These people have been intentionally and internationally deployed as foreign agents representing the interests of the WEF members to “penetrate the global cabinets of countries” as well as a wide range of key business sectors including banking/finance, other business sectors (including health and biotechnology), academia and health, media, technology, logistics, arts and culture, sports, politics and government, think tanks, telecommunications, real estate, financial investment/holding companies, a variety of non-governmental organizations, energy, aerospace and military, food and agriculture.