Latest data shows strong homeschool and private school enrollment in NC | Eastern North Carolina Now | Both options have enrollment that compares with some of the state's largest districts.

Published: Wednesday, August 31st, 2022 @ 9:22 am
By: Carolina Journal   ( More Entries )
Publisher's Note: This post appears here courtesy of the Carolina Journal. The author of this post is A.P. Dillon.

Two reports published by the North Carolina State Department of Administration's Division of Non-Public Education (DNPE) related to homeschools and private schools across the state show both options have strong enrollment figures.

The 2022 North Carolina Home School Statistical Summary's key takeaways include a statewide total of 100,904 homeschools and a total of 160,528 students ages six through 17 during the 2021-22 school year.

Many counties had homeschool student numbers registering in the triple digits, but 45 of the state's 100 counties had enrollment in the thousands.

Wake County had the largest number of home-schooled students with 14,408. Wake was followed by Mecklenburg with 11,429 and Guilford with 6,101.

The number of homeschools has been updated in the last year to reflect the removal of some closed schools and removed students. After cleaning up the records, DNPE has reported roughly 19,000 fewer homeschool students and 17,000 fewer schools in its revised data for 2022 than listed in the previous year.

Nationally, homeschooling exploded during the pandemic, with the main driver of that shift being due to school closures.

Data collected through the U.S. Census Bureau's Household Pulse Surveys conducted between April 2020 and July 2021 looked at student enrollment data. The surveys estimated that between 22-23 million households in the U.S. have K-12 school-age children. Of those households, 5.4 percent had at least one homeschooled child in spring 2020. That number more than doubled to 11.1 percent in the fall of 2020 and had jumped to 19.5 percent by May of 2021.

The 2022 North Carolina Private School Statistics show a total of 115,311 students across grades K-12 were enrolled in private schools in the state during the 2021-22 school year.

The report shows a total of 828 private schools operating in the state during 2021-22 with 297 schools listed as "Independent" and 531 listed as "Religious."

Enrollment by county again has Wake County way out in front with 20,873 private school students, again, followed by Mecklenburg with 19,516 and Guilford with 6,509.

Data on enrollment in public schools based on the latest available Average Daily Membership (ADM) figures published by the Department of Public Instruction show an ADM of 1,479,719 in the first month of school and 1,486,859 ADM during the final month of the 2021-22 school year.

When looking at North Carolina's largest district of Wake County, as of Aug. 2, the district reported 159,830 students as registered. That's down less than 1% from the district's projected 160,591 students this year.

According to a July 2022 report by BEST NC, NC Public School enrollment still hasn't rebounded following the pandemic and public school enrollment had been declining over the last 15 years.

"The percentage of North Carolina's school-aged children attending traditional public schools has declined over the last 15 years, from 88% in 2005-06 to 79% in 2019-20," the BEST NC report reads. "Meanwhile the number of students attending public charter schools and homeschools have increased substantially." 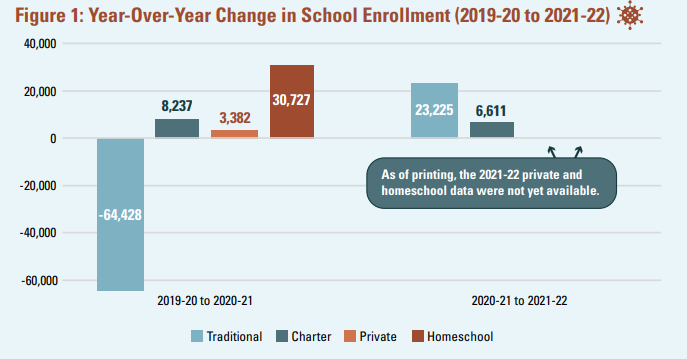 Another chart from BEST NC's July 2022 report shows the explosive growth of school choice options enrollment over the last 10 years: 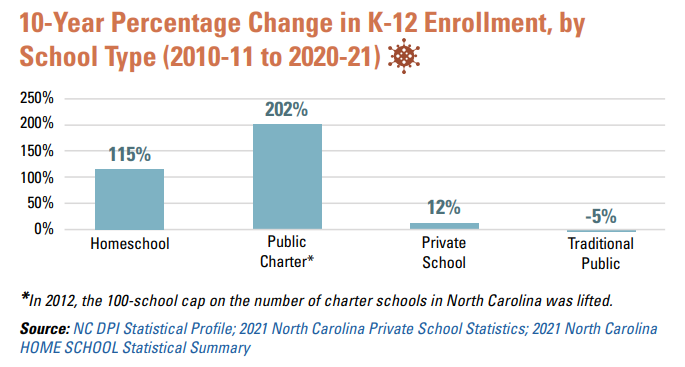 No matter which way one looks at the data, public school enrollment is down and those students that left the system do not appear to be returning. Meanwhile, school choice options continue to see strong enrollment.

MORE TO THE STORY

Here are a few data nuggets related to enrollment during the COVID-19 pandemic in North Carolina:


The 2020 Annual Charter Schools (ACS) report to the General Assembly reported a strong uptick in enrollment.

The report also includes that "Self-reported data from the state's charter schools indicate that 78% of charter schools had a waitlist totaling nearly 76,000 students statewide."
Go Back