Fake Frankie a.k.a. Beaufort County's Joe Biden, cooks the books | Eastern North Carolina Now | If you re-elect him you can count on him spending more and more of your money 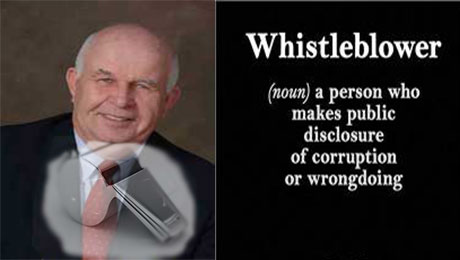 Commissioner candidate Frankie Waters is running around telling all who will listen that Hood Richardson and the Beaufort County Conservative Republican PAC are lying about him.  We are in complete agreement that someone is definitely lying.  If you look closely you will see who is lying.

Frankie Waters, with the help of Republican John Rebholz, Democrats Jerry Langley and  Ed Booth have increased spending during the past year a minimum of 16.44 percent.  The budget for the fiscal year 2021/2022 is $63,131,711.  The big spenders have increased spending at least an additional $10,382,268.  Notice, I did not say” increased the budget.”  One of their tricks is to do separate budget ordinances to hide the spending.  That way the increased spending does not always show up in the annual budget.

Here is how Fake Frankie Waters cooked the books.  I am using his numbers.  Frankie presented to the Beaufort County Republican Executive Committee at the September meeting what he called a “County Budget Comparison.”  No one other than darling Frankie was allowed to speak.  Hood Richardson, Stan Deatherage and John Rebholz were sitting in the room.    Fake Frankie readily agrees to the increased spending of 5.9 million dollars.  He then removes the one million for Beaufort Promise, the program that he refused to vote to keep illegal aliens from using to pay for their tuition to the Community College.  He then says to reduce the spending by $600,000 for the Workman’s Compensation reserve. The self-insuring of Workman’s Compensation funding is a high risk for Beaufort County taxpayers.  He then says the school capital increase of $560,000 should be removed.  His resulting book cooking leaves $3,645,024 that he is willing to take credit for.  Frankie Waters and Bernie Madoff were cut out the same sheet of cloth.  They keep books the same way.

The total of the increased spending is more than $10,382,268.  That is a 16.44 percent increase. Most of this spending will eventually show up as a tax increase.  Fake Frankie Waters hopes these chickens will not come home to roost until after he is off the Board.

If anyone transfers money to someone else it is still spending regardless of what Fake Frankie wants to call it.

Fake Frankie Waters, at the forum sponsored by the Board of Realtors this past week, made the statement that the County is not spending enough money.  “We need to spend more,” he argues.  This is not the first time he said this. This kind of thinking is right out of Joe Biden’s playbook.. The Democrat theory that the more money government spends the more prosperous we will be is pure hogwash.  The present inflation came from Biden and his spending.

During the past four years fake Frankie Waters has spent millions for unneeded new water meters, Replacing water meters did not save us one dime.  Waters was behind the liquidating of the almost 7-million-dollar Hospital Trust Fund.  That is where Fake Frankie is getting some of the money for his wild spending.

If Frankie were not spending so much money taxpayers could have a reduction in taxes.  Had Fake Frankie supported the proposed five percent reduction in spending this year that would have put 3 million dollars in the Beaufort County economy.  Citizens could be buying things for themselves instead of paying of tuition for illegals.  Fake Frankie refused to vote to exclude illegals from tuition.  He and his liberal buddies at the Community College have tried to fix who can get money only because it came up as a campaign issue.  No vote has been taken by the Board of Commissioners to restrict these funds.  Paying for illegals tuition has been discussed several times.  Ed Booth made statements that the supported illegals getting the money.

Fake Frankie Waters, at the Board of Realtors forum, stated that our jail is inadequate and a bad place to be.  This is code for his future spending to build a new jail.  That 25 million of a few years ago is now 35 million.  We do not need a new jail because the jail population is down 40 percent.

Yes Frankie, someone is lying.