Frankie Waters...just another dishonest tax and spend politician. We need a conservative BOC. | Eastern North Carolina Now | Here are our recommendations if you haven't decided yet

Frankie Waters...just another dishonest tax and spend politician. We need a conservative BOC. 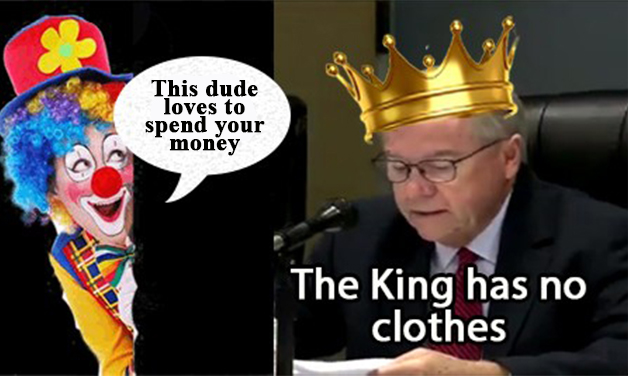 By:  The Observer Editorial Team

As this is written, Election Day is five days away.  Our experience has been that many undecided voters wait to vote on Election Day.  While we can’t understand why anyone would be undecided in this election, we recognize that some want more information.  Here it is:

This election is simple.  It is a choice all up and down the ballot between two diametrically opposite views of government.  You can put simple labels of it and call it a battle between liberals and conservatives.  So voting should be simple:  We think, given the condition our country is in makes it simple to choose to vote conservative.  So if and when you come to a race that you’re not sure about we suggest you vote Republican.  Especially for national, state and especially the judicial races.

On the local level the choice is stark in the Sheriff’s race.  It’s a liberal vs a conservative.  Scott Hammonds is the conservative choice.

For the County Commission the Limited Voting system makes it less clear.  Ed Booth is the liberal choice.  Stan Deatherage and Tandy Dunn are the conservative choices.  We suggest you pair your vote with someone and one vote for Stan and the other for Tandy.

Now the anomaly is Frankie Waters.  He filed as a Republican but he has supported the liberal Sheriff candidate.  He even gave him a $250 contribution.  2022_CF_Rogerson_2022_3rd_Qtr_Plus.pdf.  He has run ads that contend he “owes nothing to the Conservative wing of the Republican Party.  He fails to tell us what he owes to the other Republican party.  Actually, it is not debatable.  Look at his voting record.  He votes with the two Democrats more than he votes with the Republicans on the board, except stool pigeon John Rebholz.  Rebholz is Frankie’s pawn.  He votes as Frankie tells him to vote.  So, Frankie gets two votes.

It may be true that Frankie “owes nothing to the 'conservative arm' of the Republican Party."  But it would be interesting to see what his rationale would be to square his making donations to Democrats with Article IX.6.c of the GOP Plan of Organization.

Frankie Waters is the epitome of the dishonest politician.  He says one thing, then does another.  He tells whomever he is talking to what he thinks they want to hear.  His dishonesty is obvious when you decipher his political ads.  Distortion and obfuscation are his trademarks.  Click here to read more about that.

At a recent candidates’ forum he claimed he had voted three times in eight years to raise taxes.  That is dishonest.  Here’s why.  Whenever they vote to raise our taxes in one year, then vote to raise them again in subsequent years they are raising them again, not once but every time we have to pay.  Frankie knows about compounding.  He knows that if the tax rate is $.50 and they vote to increase it to $.55 and then to $.60 we are hit with both increases.  If they adopt a $.65 rate the next year we are being hit with three tax increases.  That will be true every year unless they cut the rate back to $.50.  No, Frankie, you raised taxes every year, more and more.  It is dishonest to claim you did not “raise taxes” when you voted to keep the rate the same.  Our taxes are still higher than when they were $.50.

The important fact is:  It's the increased spending that matters..  And Frankie has voted for more spending every year he has been in office.

Then Ole Fake Frankie runs an ad that says he is in favor of economic development.  But what he does not tell you is that the County has a dismal record of throwing money down the drain in real estate development.  An honest assessment would likely show the county has lost money on corporate welfare in recent years.  We did not likely gain any more economic development than would have been true if they had not given their buddies boat loads of our money.  If he really favors economic development he would have been pushing for a better school system and not giving tax dollars, in the form of free community tuition, to illegal immigrants to take American jobs.  If he really want to help small businesses he would vote to not increase taxes.  Check with Stan on that one Frankie.

And, of course, he is quick to grasp that favorite trick of dishonest politicians.  He says "if we cut taxes we'd have to cut X deputies from the Sheriff's department.  That ole trick...pick something people want and threaten to cut it rather than waste hiding deep in the budget...is simply a dog that will not hunt.

What Beaufort County needs is a conservative majority on our County Commission.  We can do that by voting Frankie out and Tandy in along with re-electing Stan.