Published: Tuesday, October 19th, 2010 @ 2:08 am
By: BCN   ( More Entries )
There's nothing more frightening for a small town's economic outlook than a dead business district. Without warm bodies in the heart of a town, the entire surrounding region suffers. The owners of downtown Washington's I Can't Believe It's a Book Store, Richard Snow and Gary Ceres, are aware of this fact; and this October, they have arranged to resurrect local nightlife by adding four additional Historic Washington Ghost Walks the weekend before Halloween. 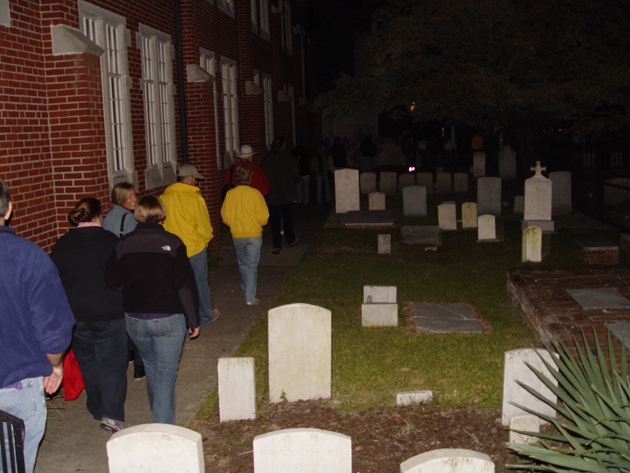 Three years ago, Downtown Washington on the Waterfront organized the first Halloween Ghost Walks. They have been such a success that in June of this year Snow and Ceres offered to take over and hold one to two Ghost Walks per month, year-round.

According to Ghost Walk guide Terry Rollins, the three tours held last Halloween attracted 300 to 400 people. This past Saturday, roughly 35 fear fanatics and history buffs appeared for the recurring tour.

"It's been very successful. We've never not had people show up. We've not had to cancel anything," said Rollins. 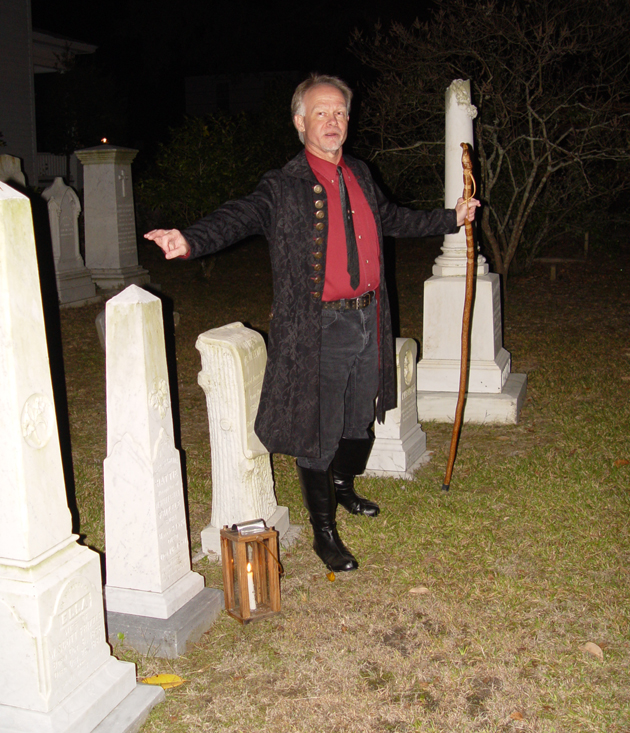 Ghost Walk storyteller Terry Rollins pauses in the St. Peter's Episcopal Church cemetery to read an inscription from one of the tombstones: "Pa, don’t hold me back. It’s all tangled up, and I can’t undo it."

During the walk, Rollins guides the group along the downtown sidewalks, passed black cats and bats, through the chill air and empty, motionless Washington streets, pausing here and there to narrate the dark stories of each haunted site: the ghost of the old jewelry store building (currently La Bella Pizzeria and I Can't Believe It's A Book Store); a murder trial at the old Beaufort County courthouse (currently the BHM library); the Bragaw House ghost; the St. Peter's Episcopal Church fire; an unsettling inscription on a tombstone in the adjacent cemetery; the Franklin-Bryant House ghost; the queen of Castle Island; the Hyatt House ghost; the Myres House witch bottles; the Marsh House cannonball; the US-17 bridge hanging; and the suicide of the Turnage Theater projectionist.

Rollins cleverly sneaks in humor, history and advertisements along the dreary way. Several of the mentioned tragedies involve past public figures and momentous occasions. They also refer to present-day business owners and attractions, such as attorney Herman Gaskins, pastry chef Rebecca Franks and the North Carolina Estuarium.

"During these hard economic times Washington is still surviving and is still doing quite well downtown...It's a great place to live. It's a great place to visit, to shop and dine and eat and have a good time," begins the tour. "Some people enjoy it so much that they refuse to leave. And some of those people I will introduce you to tonight." 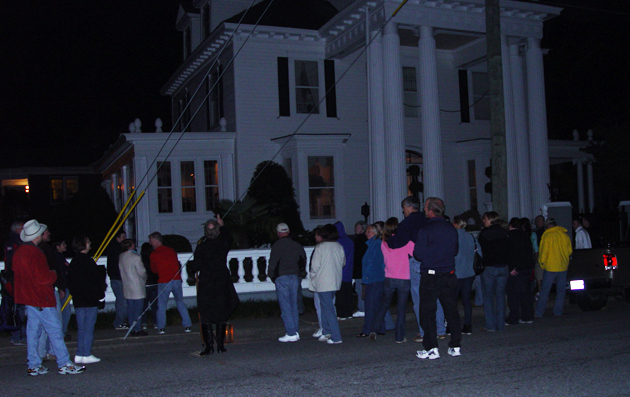 The crowd listens as Rollins tells the story of the Bragaw House ghost.

The Ghost Walk will acquire two new stops in its upcoming Halloween tours, according to Rollins: the Main Street duel and The Curiosity Shoppe building ghost. The Ghost Walk trajectory is based on a live script written by local novelist Rhonda Lucas Donald--always subject to change.

"Nearly every time we do the tour someone will come up afterwards and say, 'Well, I grew up here, and I always heard there was a ghost in that building, or the one down there,'" commented Rollins after last Saturday's walk.

The four upcoming scheduled Halloween Ghost Walks will be held the evenings of Oct. 29 and 30. Tickets are $12 per person and can be purchased in advance or on the spot at I Can't Believe It's a Bookstore on Main Street. Call owners Ceres or Snow at 252-946-0855 to make a reservation.

The hour-long Ghost Walk will happen, as usual, come rain or shine. Tickets are non-refundable unless the event is formally canceled. A minimum of 10 people is needed for each Ghost Walk, with a maximum of 50 patrons. 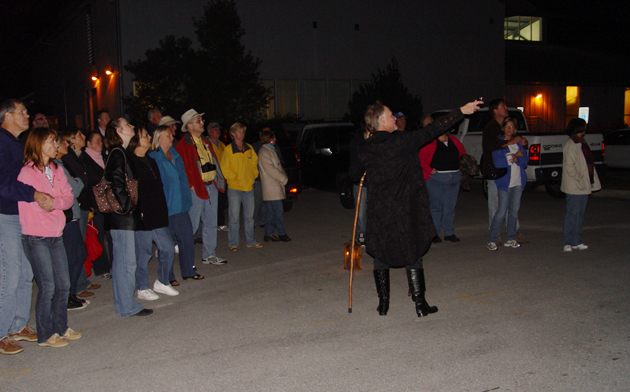 Rollins points to where a cannonball is lodged in the side of the Marsh House.
Go Back