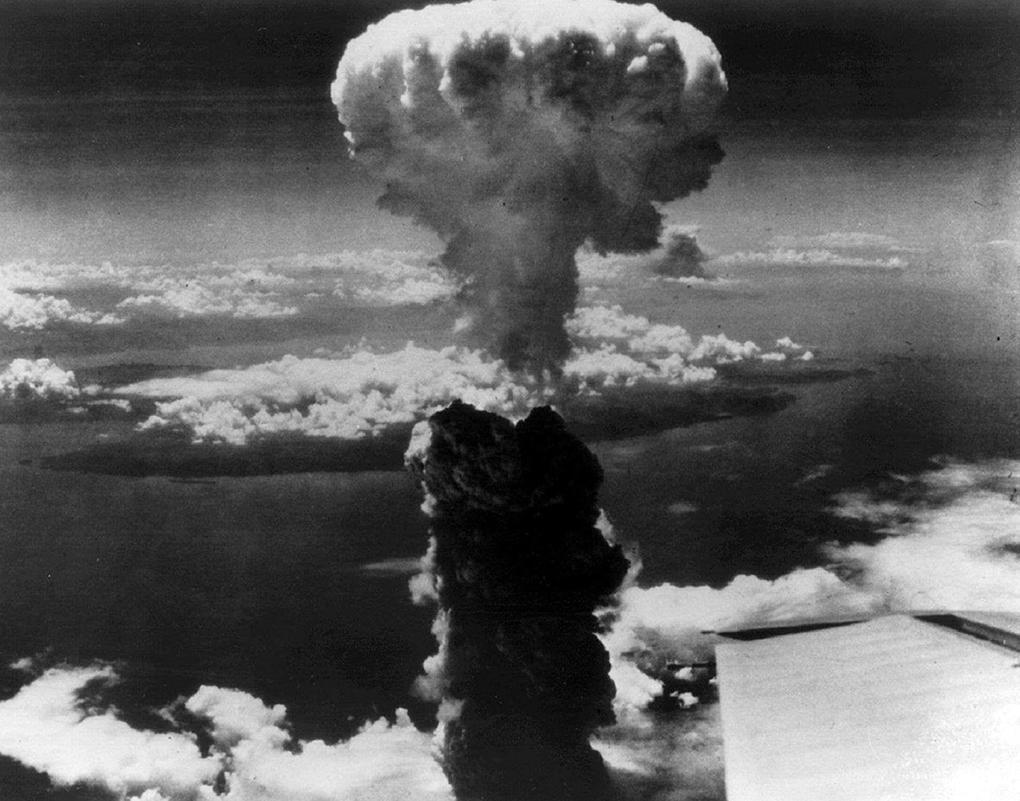 Above Nagasaki - August 9, 1945 - courtesy of National Archives: Above.

Publisher's Note: This post appears here courtesy of the The Daily Wire. The author of this post is Luke Rosiak.

The federal laboratory that designed the atomic bomb has set its sights on Americans, funding a study intended to help authorities learn how to "combat" "misinformation" - including the "conspiracy theory" that COVID came from a lab.

Los Alamos National Laboratories, which is ostensibly focused on atomic energy, funded and dedicated eight staff to the study "'Thought I'd Share First' and Other Conspiracy Theory Tweets from the COVID-19 Infodemic."

"This study examines four oft-repeated and long-lived conspiracy theories surrounding COVID-19: 5G technology is somehow associated with the disease; Bill Gates or the Bill & Melinda Gates Foundation created or patented the virus; the virus is human-made and was released from a laboratory; and a COVID-19 vaccine will be harmful," the study said. Elsewhere, it clarifies that the conspiracy theory includes the idea that the disease escaped from a lab whether "intentionally or accidentally."

"The ongoing COVID-19 pandemic clearly illustrates the need to identify health-related misinformation, especially with a lens toward improving communication strategies to combat it," it said.

The study was published in an academic journal in April 2021 and Los Alamos's website lauded it in September 2022 with a glowing article written for its in-house magazine. Los Alamos' article, which was written well after it was widely accepted that COVID may have leaked from a Chinese lab, simply omitted the fact that a large portion of the study was demonizing Americans who very well may have been right, and listed only the other three theories when describing what the study looked at.

The federal lab's website also said that coronavirus was just a trial run for the government's efforts in "counteracting" misinformation.

"The Los Alamos team's work is not limited to COVID-19, nor even to public health," it said. "The scientists are working to characterize misinformation in general, which is an important first step in counteracting its spread. Other online-information work the team members are doing includes identifying and tracking online hate speech."

The study relied on a database of purportedly conspiratorial tweets provided by NewsGuard, a group that is partnered with the American Federation of Teachers union and backed by the liberal Knight Foundation. NewsGuard later admitted that it disseminated misinformation by asserting without proof that the lab leak was misinformation or a conspiracy theory 21 times, but the academic study has not been corrected.

The study, in fact, seems less concerned with whether the theories being discussed by Americans are actually true than with positioning them as dangerous simply because they are not currently the sanctioned narrative.

"Although some conspiracies, such as Watergate or the Tuskegee experiments, may eventually be proven to be true criminal acts, the vast majority of conspiracy theories are not true, and their spread can undermine public health efforts," it said.

It said those who shared vaccine-related articles were often "knowledge-deficient," and that "One nationally representative study in the United States found that some myths (eg, that the virus was created or spread on purpose) were believed by over 30% of respondents."

The Los Alamos study acknowledges that it simply strung together "off-the-shelf" tools to feed tweets to computers - which could not even differentiate between tweets pushing "misinformation" and those correcting it, and simply treated all of it as misinformation - and came to few, if any, meaningful insights as a result of its analysis. A typical observation is that those tweeting about coronavirus often frequently mention "fauci," and that those who thought vaccines could have harmful effects wrote tweets that had more negative "sentiment" than those who trusted them.

The study says it was funded by the University of California's National Laboratory Fees Research Program and the U.S. Department of Energy through the Los Alamos National Laboratory-though the researchers misspell the name of their employer as "Laboratoory."

Los Alamos did not return a request for comment on the study's relevance to its mission.

The lab that played a role in developing the atomic bomb that killed thousands has become focused on continuing that work alongside progressive rhetoric. "From the makeup of the workforce to the breadth of the research, Los Alamos National Laboratory embraces diversity to ensure national security," the lab (whose workforce is 1.5% black) boasted in November.

"The Department of Energy's (DOE) misuse of taxpayer dollars chasing after conspiracy theories on the internet is literally leaving Americans in the cold," Ernst told The Daily Wire. "The Biden administration's policies are contributing to a spike in home heating costs and putting Iowa and other parts of the Midwest at risk of power outages this winter. The president should flip the switch off on the silly science and redirect the attention and resources of DOE towards finding real energy solutions."

The study is not the first example of the nation's most prestigious national security institutes trading nuclear science for hyper-partisan and intellectually thin activism. In 2020, Christopher Rufo reported that Sandia National Laboratories, which designs nuclear weapons, "sent its white male executives to the La Posada luxury resort to undergo a mandatory training called 'White Men's Caucus on Eliminating Racism, Sexism, and Homophobia in Organizations.'" The Joe Biden administration also hired Sam Brinton, a nonbinary gender activist who has since been arrested on felony theft charges and fired, in a high-level nuclear role.

The study also shows how during the Biden administration, a full gamut of agencies has been deputized to root out Americans who are engaging in speech that is not sanctioned by the government. The National Science Foundation (NSF) this year gave $5 million to a group called "Hacks/Hackers" that says it will make software that will help automate the process of social media users replying to their friends to rebut them with officially-approved lines when their friends post "misinformation."
Go Back