John Lennon's "Julia" Did Not Begin with the Iconic "White Album" ... and,

"The Beatles," arguably the most influential ensemble of a generation from a 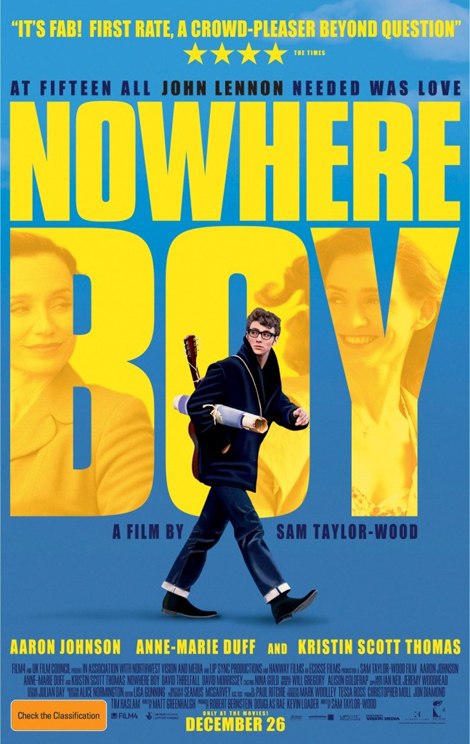 musical period that is inarguably the most influential music of the 20th century, had two leaders that shaped the band's creative instincts: John Lennon and Paul McCartney. This film, "Nowhere Boy," was mostly about one of these two leaders - John Lennon.

Singer, songwriter, musician, poet and political activist John Lennon got his start as a lower middle class boy growing through the natural angst of adolescence, not knowing his father or his mother, but adapting his hyperactive intellect, as best he could, to achieve some balance of normality so that he could endure the tough streets of Liverpool, England, and become one of the most influential artists of his generation.

John Lennon's unique talent, and his irrepressible ability to express it, was born from a remarkable chain of events, not least of which was one Elvis Presley, and the reunification his estranged mother, Julia.

John Winston Lennon was born October 9, 1940 after Great Britain's initiation into World War II, and as it survived in Europe as the lone survivor from the hegemonic advance of Nazi Fascism. He was the son of a British sailor, but not a British sailor home for a short interlope with John's mother, Julia, as implied in the early scenes of "Nowhere Boy," but a British merchant seaman, a proper father, Alfred "Alf" Lennon, who married Julia Stanley in 1938, and there in Liverpool, England, sired his one son, John. 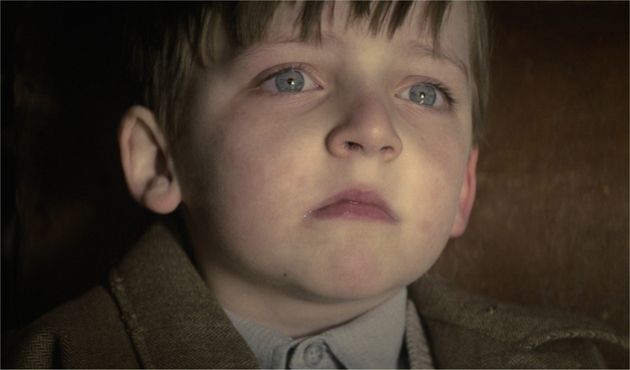 The young John Lennon, Alex Ambrose, shows in his eyes the sum of John's childhood (above), and in Aunt Mimi's eyes, Kristen Scott Thomas, one senses the stability that gave the boy a chance in life: Below. 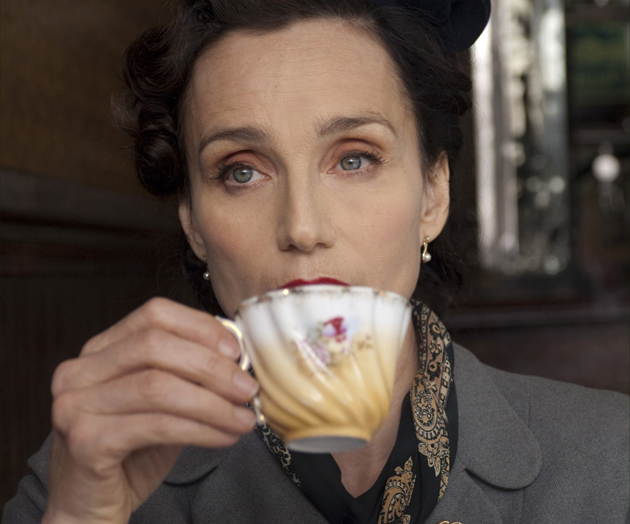 From the beginning of the film, "Nowhere Boy," we, like the young John Lennon, are led to believe that John was a bastard son, his mother irrevocably estranged, and John forced to live with his aunt, Julia's sister, Mimi Smith, ably played in the film by Kristen Scott Thomas. From the age of 4, John was the ward of his aunt, a stern, reserved woman, but incredibly committed to the boy's welfare.

Mimi Smith, and her husband, George never had any children of their own, so John was never at a want for love or attention, particularly from his Uncle, whom enjoyed the bright boy immensely. In 1955, George Smith tragically died from a failing liver, yet, remarkably, as per this film, the year did prove to be a "watershed" point for the adolescent, imbued with inert creativity, and even more unresolved issues. Chief among his unresolved issues: his faint memories of his family's dissolution and a mother lost because of it, and school just was not a good fit for his hyper-creative spirit. 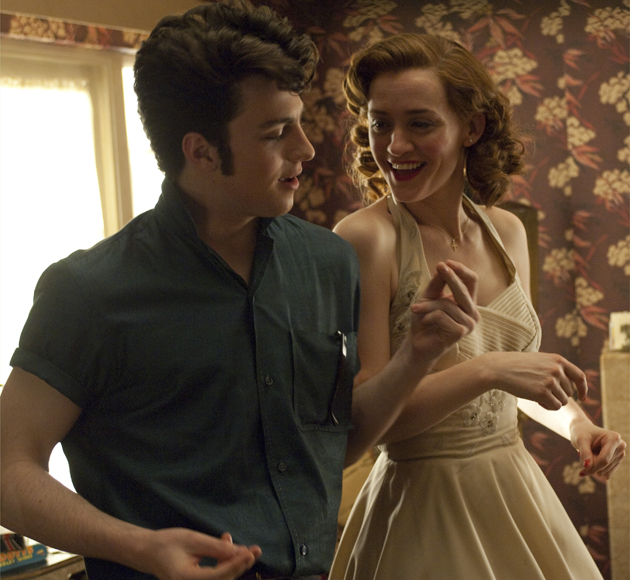 John Lennon, Aaron Taylor-Johnson, shows an artistic kinship with his mother, Julia, played by Anne-Marie Duff, as they dance to Elvis Presley: Above. John, at this point in his life, was far less interested in school: Below. 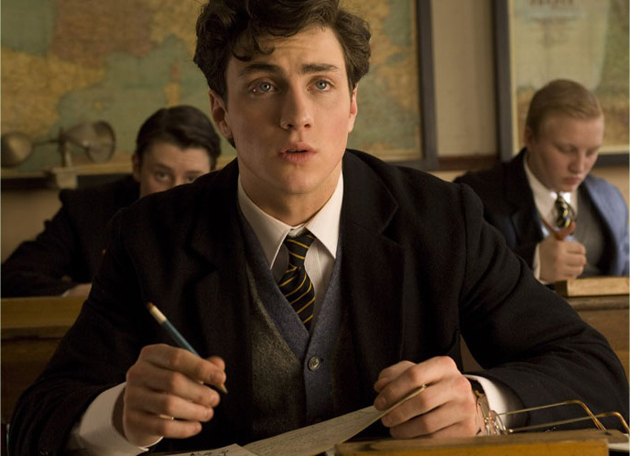 In John Lennon's real life adolescent / two sisters nurturing triangulation, he knew his mother earlier than depicted in the film, and even was exposed to his mother's love of music. But, why let the truth get in the way of the perfect conflict / resolution drama of "Nowhere Boy's" John being re-united with his mother after the sudden death of his beloved uncle, George Smith. Irrespective of whether the truth of the situation is less dramatic than the creative instincts of screenwriter Matt Greenhalgh, the truth was John actually did begin playing the banjo and ukulele because the guitar was too difficult at John's 11 years of age. What does matter is that the story of John Lennon's adolescence was seamless, well produced, well cast, and well acted. It was truly an interesting tale told, by Director Sam Taylor-Johnson, of one of the 20th century's most enigmatic people, regardless of the veracity of every historic nuance of this one Beatle. 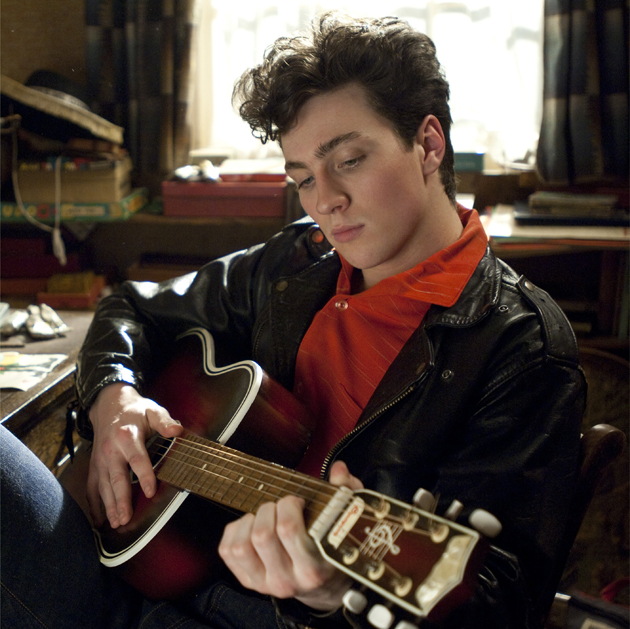 Once John, Aaron Taylor-Johnson, committed himself to the guitar, he was nearly never without it: Above and below. Mimi Smith once remarked to John, "The guitar's all right John, but you'll never make a living out of it." Man, was she ever wrong. 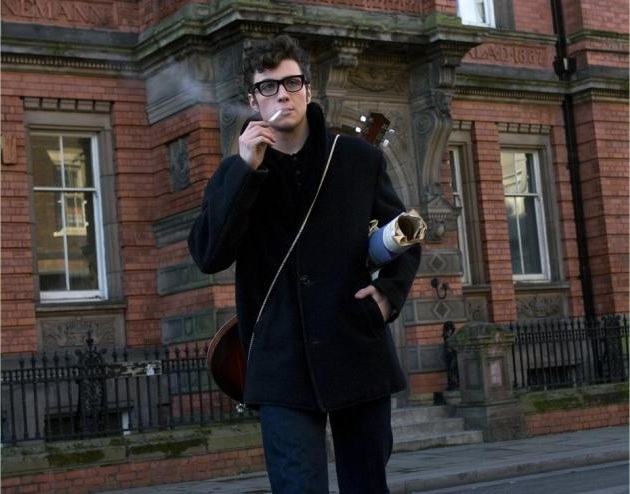 Whether one was a fan of The Beatles or no, The Beatles influenced music in their day not unlike a lesser classical composer of the nineteenth century, and for the better, I might add, for their generation. Their music flowed into our consciousness, and remarkably it was not because of the four individual magnificent talents of each individual band mate, it was more due to a certain grand chemistry, where the sum of the whole was significantly greater than the aggregate of their individual skills. They were the Beatles, and, intrinsically, John Lennon was solely responsible for putting this group of Liverpool lads together, keeping them together until their near immediate, and irrevocable success, and branding his spirit into every thread of melody, and their artistic measure. 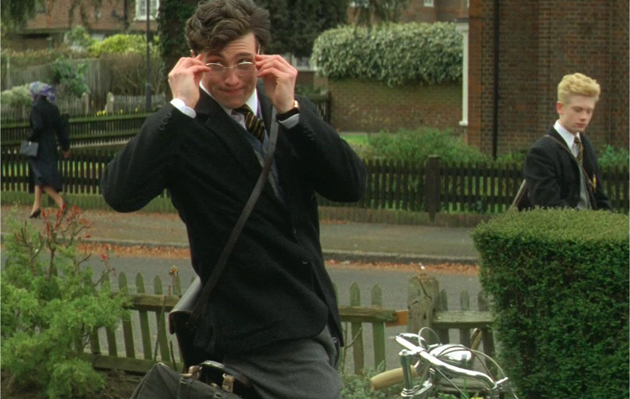 John, with his trademark circular wire-rims, which Mimi made sure that John wore, in one version of spectacle or another ... at least until he was out of her sight: Above. John's constant charisma insured that he was never at a loss with the young women of Liverpool: Below. 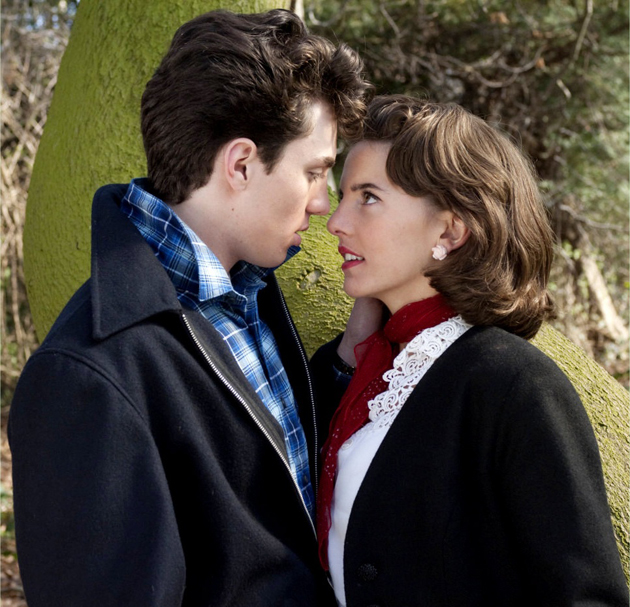