Oz the Great and Powerful | Eastern North Carolina Now | Since we are being honest, I must admit, I am of the age where the original film, with Judy Garland as Dorothy Gale and Frank Morgan as the Wizard, had a profound effect on me.

Oz the Great and Powerful

Why Did I Go See This Movie?

In a phrase: The film had flying baboons. To be perfectly honest, I thought they (the baboons) were flying monkeys like the original film, "The Wizard of Oz," in which this prequel was based upon, as 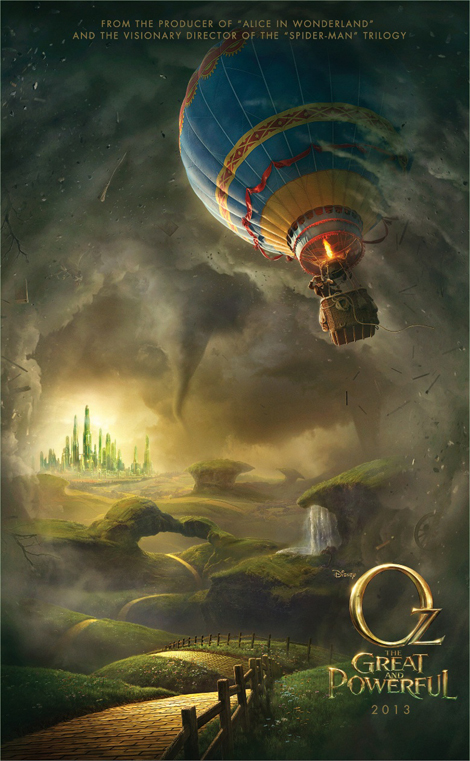 well as L. Frank Baum's other 13 books of this Land of Oz; however, flying primates are well enough incentive to lead me to any film, especially one dedicated to everything Oz.

Since we are being honest, I must admit, I am of the age where the original film, with Judy Garland as Dorothy Gale and Frank Morgan as the Wizard, had a profound effect on me. The original film was a huge part of my 1950/60's childhood, and since I am extremely open minded, I did not expect this prequel to be representative of the original film directed by the great Victor Fleming in 1939; however, I was pleasantly surprised to discover the film to be sufficiently well constructed in ways unfamiliar to the original.

The original film was a minor musical, with that one iconic tune, as familiar today as it was then - "Somewhere over the Rainbow." It was also a film of remarkable continuity of purpose, with a rare chemistry of characters: Judy Garland as Dorothy, Ray Bolger as the Scarecrow, Bert Lahr as the Cowardly Lion, Jack Haley as the Tin Man, Margaret Hamilton as the Wicked Witch of the West and Frank Morgan as the Wizard. The film may be more iconic than great art, but it is well remembered, and to many of us an irrepressible classic.

"Oz the Great and Powerful" does not have the same chemistry of characters; however it does succeed on many other levels, most notably the marriage of cinematography and computer graphics to achieve a fantastic story built on the ambitions of a financially ambitious Wizard, and one ruthless wicked witch. There was one similarity; however, which was a fine touch: The beginning 21 minutes of the film (my wife timed this) was filmed n black and white, which well set the mood for the rest of the film's ocular feast. 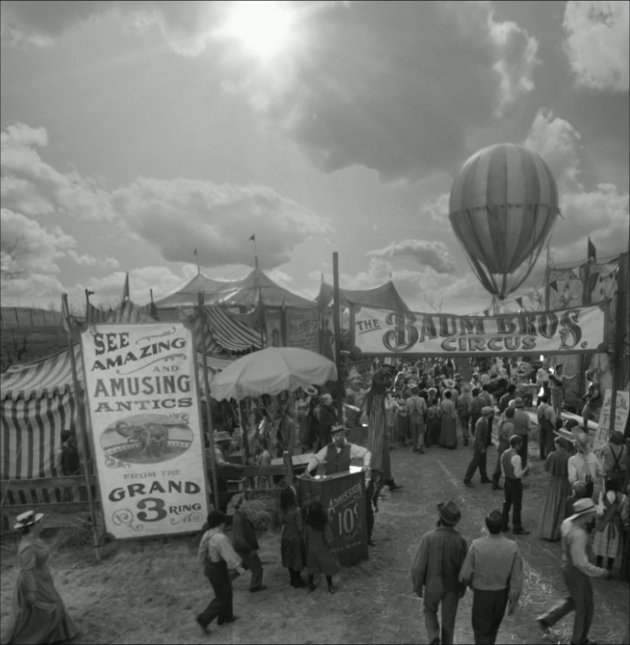 The black and white carnival world of the L. Frank Baum classic, which we have come to expect: Above. On cue, as in the "Wizard of Oz," there is a Kansas magician, a tornado, and the film's lead character (in this case the magician) is sucked up into the vortex of the storm, all in black and white celluloid: Below.    Click the picture to expand to as much as 1000 pixels wide within most expanded images, and then push the arrows embedded in the center edge of the play-box to access the gallery, and slide new images into viewing within the center of the screen. 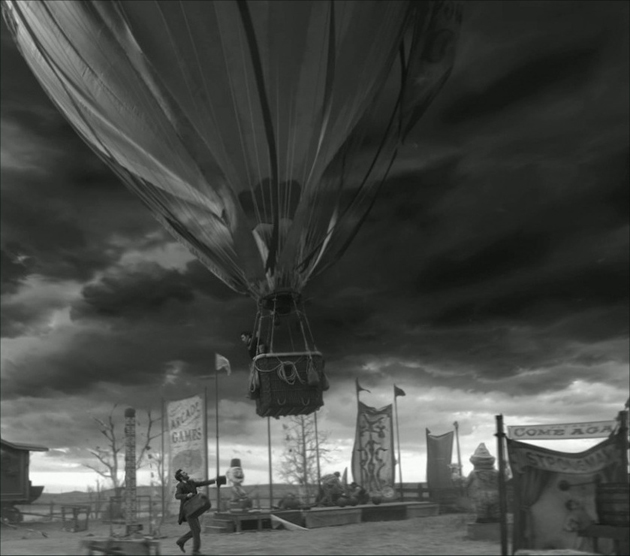 In that initial 21 minutes, the film began with a carnival and ended with a tornado, while the audience was treated, in the interim, with that similar (as it was in the original "Wizard of Oz") opportunity to meet some of the characters in that real black and white world that would inhabit key roles in the fantastic colorized world of what will become the Land of Oz.

And in the land of Oscar Zoroaster Phadrig Isaac Norman Henkel Emmannuel Ambroise Diggs, in short, Oscar Diggs, in short, Oz, we are first met with the colorized fantastic, and then the common character traits of humans as they act, and re-act in a beautiful, yet surreal land of witches - good and bad - inhabitants unimaginably remarkable, and they all can talk; except the flying baboons, but they can fly ... right? 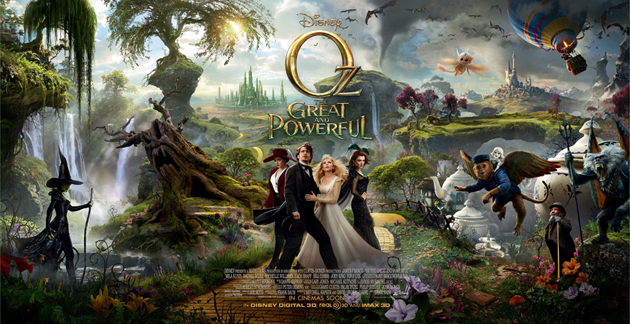 This is the new fantastic world of a carnival wizard, a talented huckster from a black and white Kansas, and dropped from the whirling deadly vortex of a massive tornado into this spectacular world. It is a beautiful, but dangerous world, and in this invariable world of awesome beauty and impervious peril, the Kansas wizard must puff himself up, live the illusion and become the "great and powerful Oz," just to survive.

In this film version, James Franco, the man of a thousand squints, was designated to be that Oz, the role that this entire film must pivot upon, and in his grinning, hapless manner, pulled it off. The antagonists, two sister witches, Mila Kunis as Theodora and Rachel Weisz as Evanora, have an equally strong responsibility to assume the role of evil to allow the Protagonist Wizard, in all of his hucksterism, to pull the film toward the corner of good in this estimable good versus evil grudge match of such fantastic proportions. 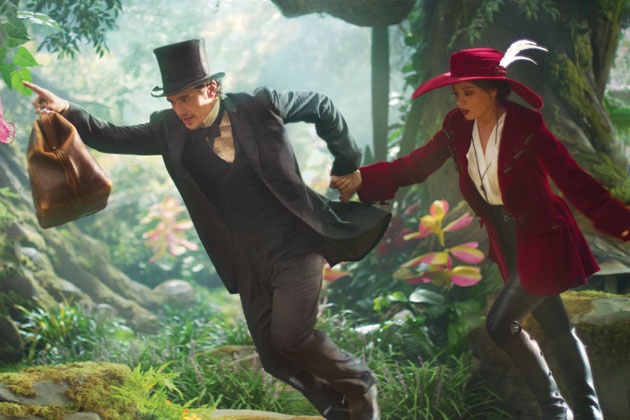 Oscar Diggs, James Franco (left), and Theodora, Mila Kunis (right), seek to escape the inevitable danger of this fantastic land when they meet shortly after the Wizard's dramatic arrival: Above. 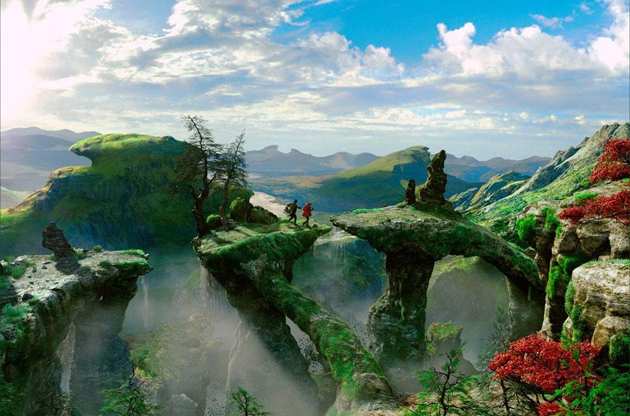 These two kindred travelers sojourn, with this visually stunning landscape in the backdrop: Above. And eventually find their way down the "Yellow Brick Road," to Emerald City: Below.    Click the picture to expand to as much as 1000 pixels wide within most expanded images, and then push the arrows embedded in the center edge of the play-box to access the gallery, and slide new images into viewing within the center of the screen. 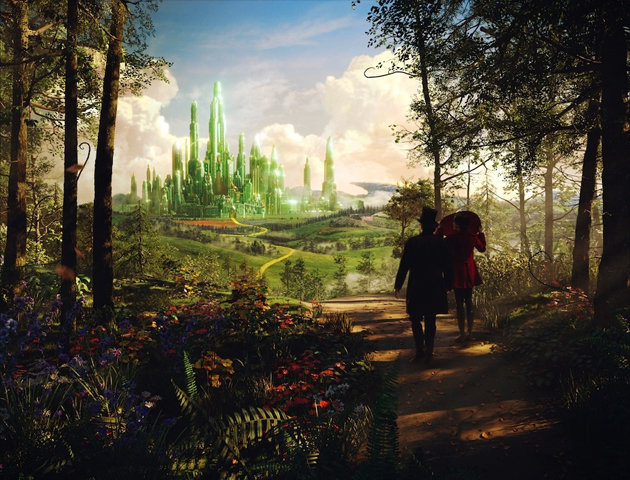