"Every Picture Tells a Story ... Don't It:" Massanutten Mountains

Login to Send a Private Message to Stan Deatherage
The Massanutten Mountains are not only a geological oddity, they have also played an important role in the history of the Shenandoah Valley and Virginia. The Massanutten Mountain Range is composed of synclinal ridges, with two ridges rising up from the Shenandoah Valley floor south of New Market Gap, and 3 ridges rising up north of the gap. These high, thin, relatively straight ridges form one valley, which is unnamed and forged by river gorges, south of New Market Gap. There are two valleys north of the gap: the larger valley east of the center ridge of the Massanutten Mountains is Fort Valley, and the much narrower valley is Little Fort Valley, which is west of the center ridge.

The New Market area is also well-known for the pivotal Civil War battle fought from the center of the town of New Market, Virginia, to just northeast of this still-small town at the foot of the western ridge line of the Massanutten Mountains. In this one-day battle, The Battle of New Market, fought on May 15, 1864, the roughly 5,000 Southern combined forces of former Kentucky politician John C. Breckinridge's regular Confederate soldiers and 257 cadets from the Virginia Military Institute (VMI) defeated Union General Franz Sigel, and drove his 10,000 Union soldiers from the Shenandoah Valley. The Union suffered the worst of it, taking 831 casualties, with the South suffering 577 casualties.

I visited the New Market Battlefield on December 20, 2010, after making my way through the Page Valley on the eastern side of the Massanutten Mountains and west of the Blue Ridge Mountains. The Page Valley, of the culturally historic Shenandoah Valley, is truly beautiful as it exemplifies the essence of the Shenandoah Valley: farms, history, and mountain ranges off in the distance. 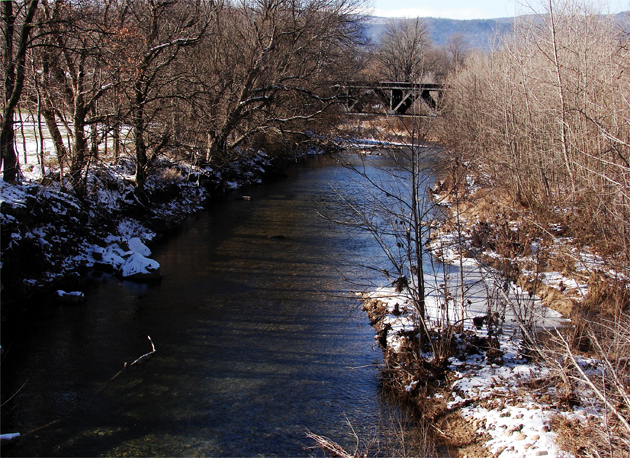 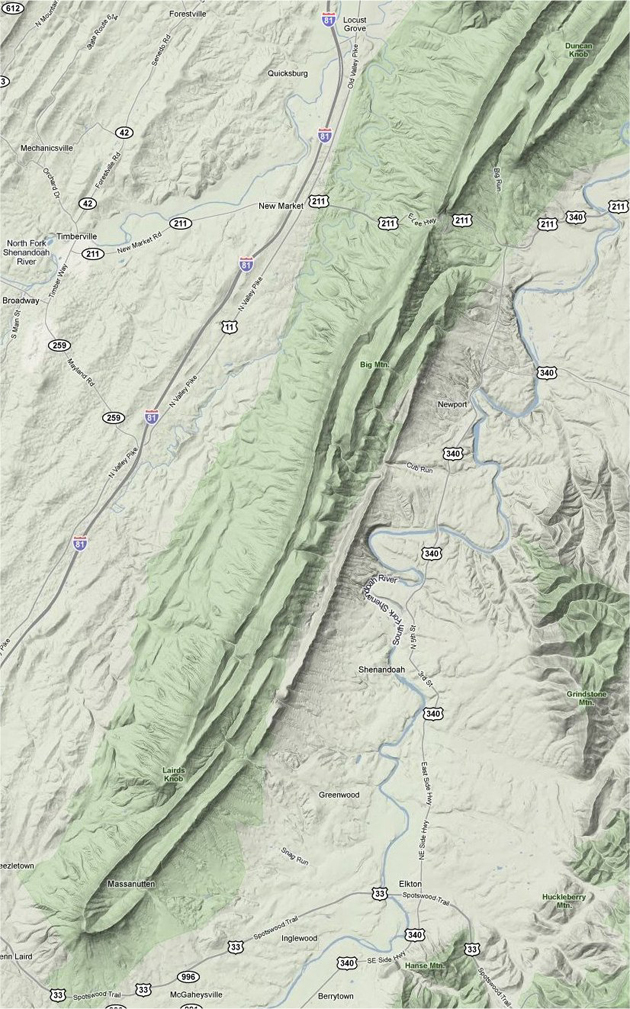 This location / terrain gives the trained eye a picture of the diversity of topography of this region of the Appalachian Mountains: Above. Livestock farms litter the landscape of the Page Valley, as it does as well in the Shenandoah Valley, with often the shoulders of a fully developed mountain range in the distance: Below. 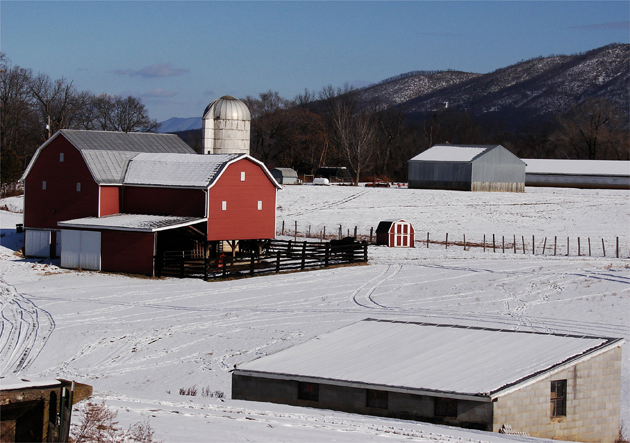 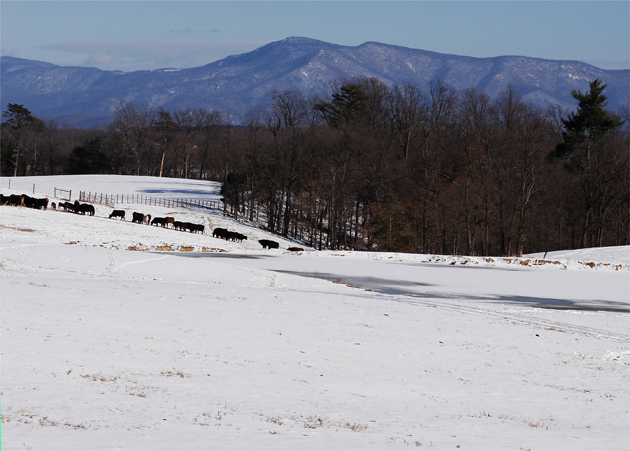 Pack houses, grain silos, snow covered fields with Blue Ridge Mountains in the distance. There were so many scenes that just looked like another beautiful Christmas card: Above and below. 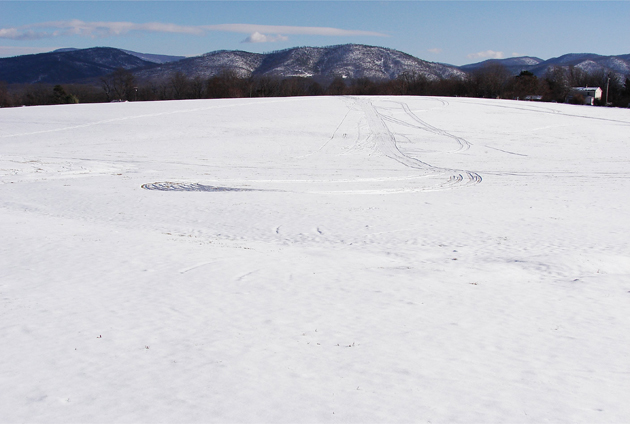 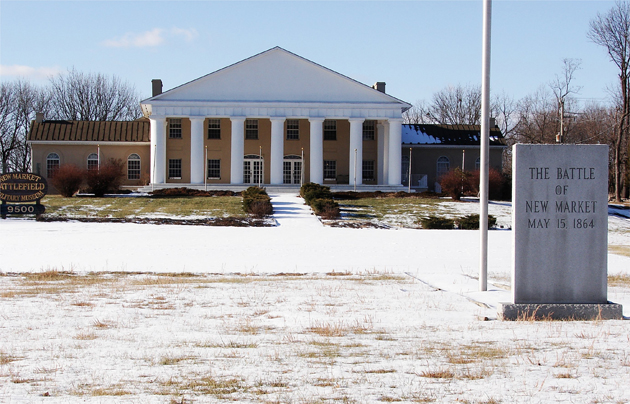 After we made our way up Hwy. 340, and across New Market Gap on Hwy. 211, we find ourselves in the town of New Market just on the downside of the Gap. If you believe that the Massanutten Mountain Range does not have the same treacherous roads, with the hairpin curves, of the bigger mountain's roads - think again. The Massanutten Ridges may not be tall like the Appalachian Mountains in North Carolina, but they are steep, and so are the Mountain's roads. 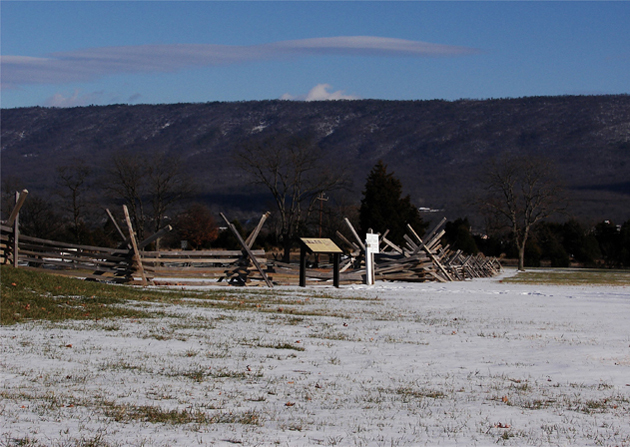 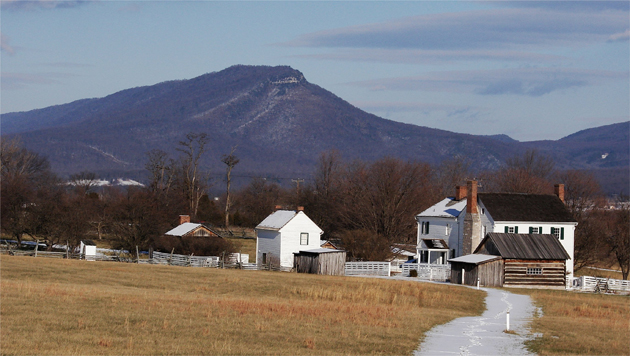 The period buildings in the foreground existed during the New Market Battleground, the larger mountain in the background is Duncan Knob of the Massanutten Mountain Range: Above. Downtown on Main Street in New Market are these two period homes that were probably somewhat newer during the War Between the States in 1864: Below. 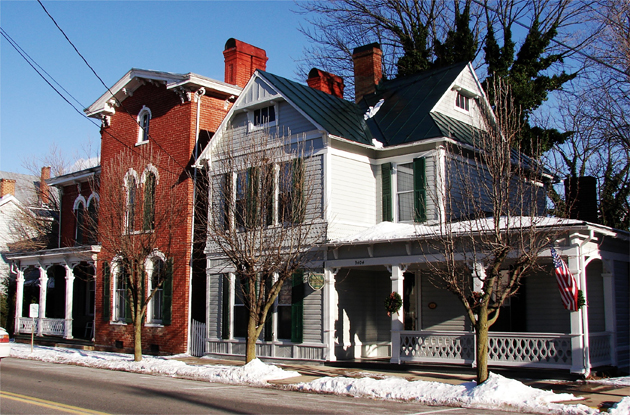