Each year, thousands of people from all over the country will descend on Nags Head as spectators and participants in a very special event — the Francis Rogallo Kite Festival. The Wright brothers’ story is well known. But there’s another equally interesting story grounded in Kitty Hawk — that of Francis and Gertrude Rogallo. The Rogallos invented a flexible wing, and anyone who has enjoyed hang gliding, popular since the 1970s, owes a debt of gratitude to their invention.

In the late 1940s, Francis was an engineer for the National Advisory Committee for Aeronautics. While stationed at the NACA Langley Research Center in Hampton, Virginia, he came up with the idea for a simple, practical aircraft for sport and recreation. Pursuing the idea on his own time, Francis (along with his wife Gertrude) used curtains from their home to construct a flexible wing based on models he had tested in a homemade wind tunnel (the wind came from an industrial-size floor fan). On August 15, 1948, the Rogallos came to Jockey’s Ridge and successfully flew the cloth wing, christening it the Flexi-Kite. 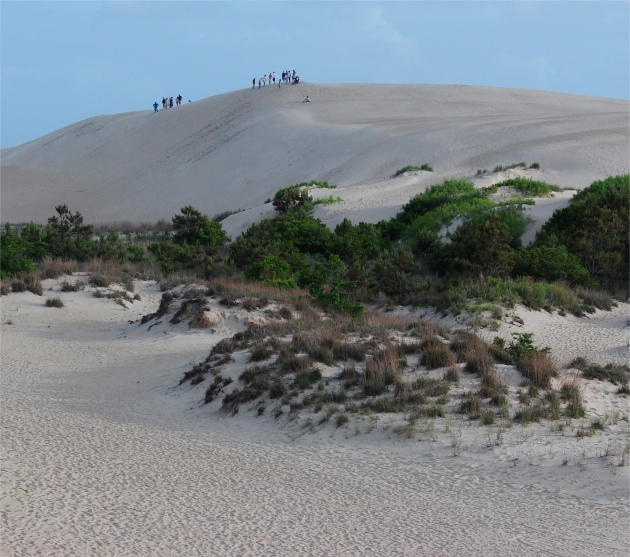 There is always a crowd waiting on top of Jockey's Ridge, the highest sand dune on the east coast, watching the sunrise or the sunset, and often deciding on if the breeze is right to fly a kite, or ride the thermal currents with the aid of a hang glider: Above and below. 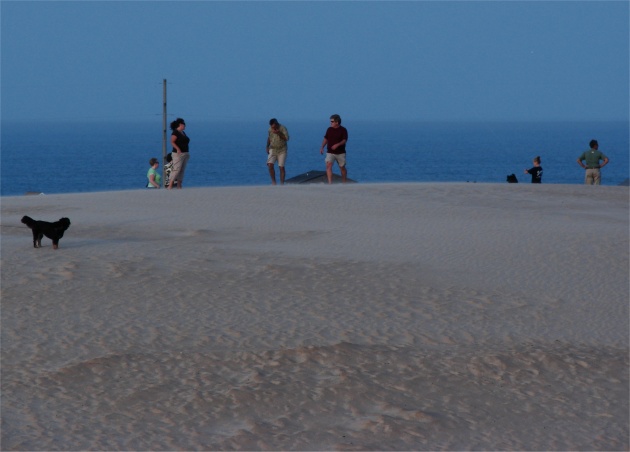 The Rogallos were granted a U.S. patent for their flexible wing in 1951, and Francis continued to research and develop his idea, eventually attracting the attention of NASA and the United States space program. In the 1960s, the Rogallo wing developed into an inexpensive, foot-launchable glider whose popularity spread rapidly. 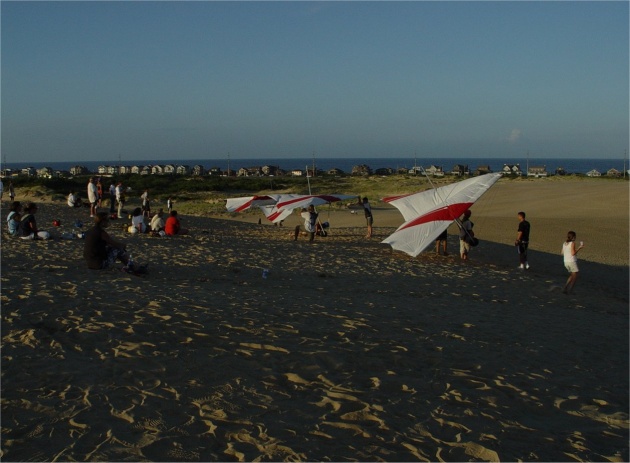 Thanks to the creative inspiration of Francis Rogallo, the hng glider is a constant companione to the montrosity that is Jockey's Ridge: Above and below. 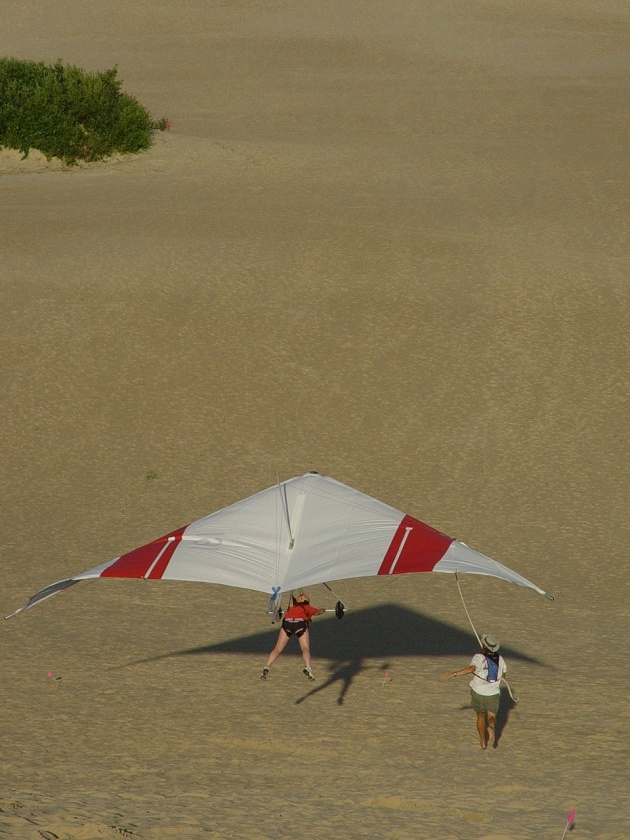 At that point, the Rogallos chose to allow their design to be copied freely in order to promote the sport of hang gliding. Their love for gliding took precedence over profits, and in 1971, adventurous types gathered for the world’s first hang glider event in California. It didn’t take long for the sport to soar to new heights. Since then, millions of people around the world have taken to the skies. 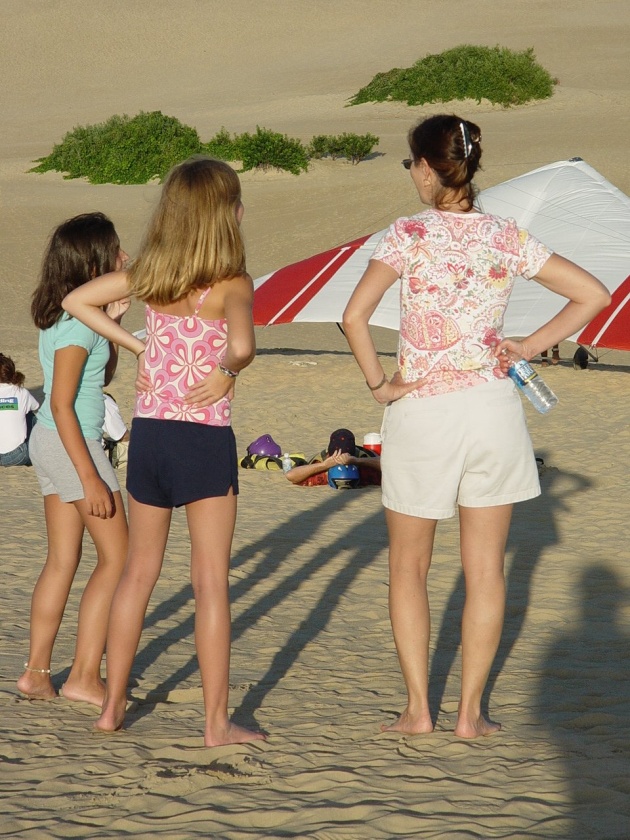 Today, people gather at Jockey’s Ridge every year to show their gratitude by honoring the Rogallos with a festival.

The 23rd Annual Rogallo Kite Festival at Jockey’s Ridge State Park is a three-day event with something for everyone — from those who would like to learn more about kites and gliders to those who are just itching to get off the ground.

Kitty Hawk Kites in Nags Head sponsors the event. Do they have kites? You betcha. More kites and gliders than you’ve ever seen. At the festival, they offer kite flying lessons, demonstrations, displays, and kite making with the children. And for those who like things on a grand scale, dozens of giant kites will be taking to the air: Last year’s favorite was a much bigger-than-life flying cow.

On Thursday, June 9, an annual kite auction will be held to benefit the Rogallo Foundation’s goal of building a $5 million Rogallo Museum dedicated to educating and promoting the wonders of personal flight.

After a day of kiting and gliding, Friday night means music: All who come will enjoy live music, dancing, and seafood, Outer Banks style.

On Saturday, the skies over Jockey’s Ridge will once again be filled with graceful, colorful kites and hang gliders slicing and weaving above the warm air currents off the Atlantic Ocean.

“Up until Francis Rogallo’s invention of the flexible wing, the basic school of thought on flight only included the straight fixed wing of an airplane,” says John Harris, president of Kitty Hawk Kites. “The modern day hang glider, paraglider, kiteboard kite, and stunt kite grew out of his designs. Rogallo’s goal was to create an inexpensive, personal flying machine, and he achieved that. The annual Rogallo Festival celebrates him and his contributions to recreational flight.”

So, in the words of Old Blue Eyes himself: “Come fly with me / let’s fly, let’s fly away.”

When Bryan Oesterreich is not writing for this and other regional publications, he teaches English at Beaufort County Community College.

Perhaps it’s time you got your feet off the ground: This is the place if you’re ready. Since 1974, Kitty Hawk Kites has instructed more than 300,000 people on how to experience personal flight. Young and old can venture up, in tandem with an instructor, 2,000 feet above the sandy dunes of the Outer Banks. After the ultra-light tow plane disconnects, you and your instructor glide with the wind as gracefully as a gull back down to terra firma.

Rachael Schmeck, marketing manager for Kitty Hawk Kites, loves her job. “The best part… is helping people accomplish what they thought was physically impossible, to challenge themselves and to create experiences that become the most amazing of their lives.”