Login to Send a Private Message to Brandia Deatherage
No more excuses: Reduce. Reuse. Recycle. Within the next week, all City of Washington residential solid-waste customers should be outfitted with a blue, 95-gallon, roll-out recycling cart.

This morning the City of Washington Public Works Department began delivering the first batch of the 4,000 ordered carts to residents located in the area encompassed by Willow and Havens streets and Pennsylvania and John Small avenues in Washington. 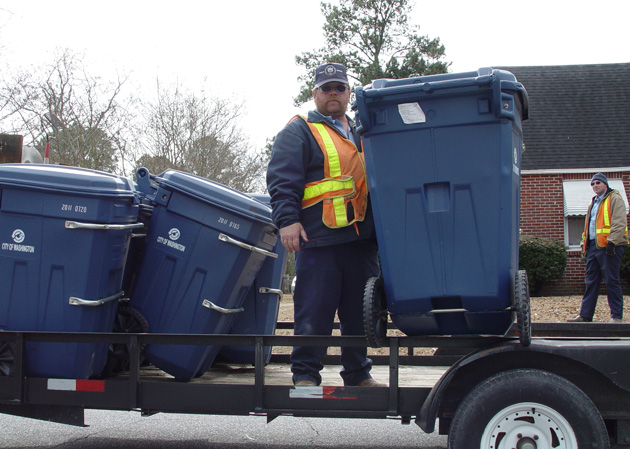 City of Washington employee Ray Beddard stands ready to pass off another of the new 95-gallon, blue recycling carts to be placed in the driveway or yard of residents along 8th Street in Washington around noon today.

Since 1995, when the City's recycling program began, residents have been collecting their recyclables in small, green, uncovered bins without wheels that, if stored outdoors, could collect water and attract bugs. Each household could request up to four bins apiece. The cleanliness and convenience of the new covered, wheeled carts are intended to encourage an increase in recycling among residents.

The City of Washington Solid Waste Division advises residents to use the outdated green recycling bins for the indoor collection of recyclables.

The Washington City Council approved the purchase of the new carts at their Sept. 13, 2010, meeting. The carts will cost $191,920 according to Allen Lewis, the city's public-works director.

Funding for the carts was included in the 2009-2010 fiscal-year budget. That funding included $100,000 in city money and a $100,000 grant from the N.C. Department of Environment and Natural Resources.

The City sells the collected recyclables to the East Carolina Vocational Center in Greenville where they are sorted and prepared for sale to the recycling market.

"Money that the City earns from selling recyclables offsets the cost of providing this service to city residents," reads the City of Washington Web site. "Every resident can help keep the cost of solid waste services down by recycling as many items as possible every week."

The following trash items should be recycled according to the City of Washington:

•    Newspapers, inserts, magazines and catalogs
These should be dry. On rainy days put paper items in plastic bags.

•    Aluminum and metal cans
Food and beverage containers only. Rinse cans out. There is no need to remove labels. Crush cans to save space. Scrap metal, paint cans, aerosol cans, motor oil or antifreeze cans, aluminum foil, plates or pie tins can not be accepted for recycling.

•    Plastic containers -- PETE #1 and HDPE #2
Items such as soft drink bottles; milk jugs; detergent, bleach and fabric softener bottles; and cooking oil bottles. Rinse containers. Discard caps with garbage. There is no need to remove labels. Crush containers to save space. Plastic wrap, plastic bags or motor oil and antifreeze bottles can not be accepted for recycling.

•    Glass -- brown, clear and green
Bottles and jars only. Rinse bottles and jars. Discard caps with garbage. There is no need to remove labels. Light bulbs, plate glass or mirrors can not be accepted for recycling.

For more information, please call the City of Washington Public Works Department at 252-975-9302.