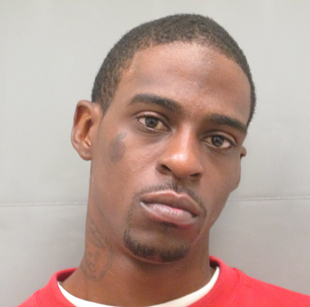 Steven Louis Jackson
On October 18, 2013, Beaufort County Detention Officers were assaulted on three separate occasions by an inmate being held in the segregation cell block of the Beaufort County Detention Center. The first assault occurred after inmate Steven Louis Jackson, age 26, of Windley Road in Washington was able to damage a section of the metal protective screen by pulling it away from the bars in his cell. As a Detention Officer performed a security check at approximately 3:00 p.m., the inmate threw a small item through the hole he created in the screen, striking the Detention Officer on the hand. The Officer also discovered that Jackson had ripped apart the sleeping mat in his cell.

When Officers were replacing Jackson’s bedding at 5:01 p.m., Jackson threw milk through the holes in the cell door screen and struck two Officers. At 9:35 p.m., Jackson threw urine through the holes in the security screen. The urine struck a Detention Officer performing a mandatory security check of the area. The Officer was struck in the face and torso by the urine.

Jackson has been transferred to the NC Department of Corrections on a Safekeeping Order until his next court date. Jackson and the Detention Officer struck with urine will have to undergo medical testing to determine if any communicable diseases were transmitted during the assault.