Now the IRS wants to force small communities and municipalities to pay for health insurance on fire and EMS volunteers | Eastern North Carolina Now | The Volunter EMS.org Directory reports that across the country, there are thousands of organizations that rely on volunteers to answer the call every single day. Some are called emergency medical services (EMS) or perhaps first aid or rescue squads.

Login to Send a Private Message to Buzz Cayton
Publisher's Note: This article originally appeared in the Beaufort Observer.

The volunteerEMS.org Directory reports that across the country, there are thousands of organizations that rely on volunteers to answer the call every single day. Some are called emergency medical services (EMS) or perhaps first aid or rescue squads. Others are an ambulance corps or something else. But, regardless of name, when you need help, men and women of all ages, and all backgrounds, join together to respond to the emergency. In many cases, these people didn't have any medical training ahead of time - they are normally students or housewives, salesmen or teachers, accountants or engineers but when the radio sounds, they become a team of dedicated unpaid professionals.

It is estimated that 87% of all Fire Fighters and EMS in the United States are Volunteers.

We found 9 Rescue and first responder units in Beaufort County:

•  The first rescue squads in North Carolina were not initially incorporated.

•  Early Rescue Units in Our area according to website history were:

I was not aware of the Washington Rescue Squad in 1951. I returned from active duty in the Army in November of 1958 and Milton Parker invited me to a Volunteer Fire Department Meeting at the Washington Fire Station. My first time there they said they needed to form a Rescue Unit and Milton hollered out that I should be Chairman and Captain to form a Unit. Suddenly I was elected.

Bud Willis had been Chairman of Civil Defense and apparently the idea came from his observations of a need in the County. Prior to forming of the Washington Rescue Squad the only service was performed by Paul Funeral Home, Whitfield and Whitley and Randolph Funeral Home with ambulance service. They did a good job in transporting for the community but there was no equipment or trained personnel for major emergencies. With the help of Bill Moore, the manager of WRRF radio and good volunteers I was able to form the First Washington Rescue Squad. I was the Captain of the Unit for almost five years as a volunteer with no pay. We averaged over 300 calls per year counting fires and accidents.

These men volunteered their time and at times placed their lives in danger to perform a service for their community at no charge. The same is true today for those that serve. More than once we remembered the Verse, "What ye do unto one of the least of these my brethren ye do it unto me".

13 original members became the first to be trained by Dr. Bill Piver in First Aid and Water Safety. He later trained us beyond basic First Aid. 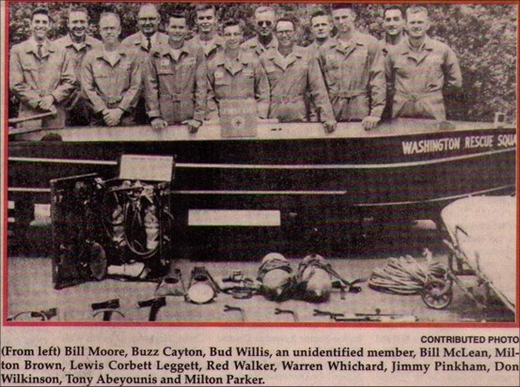 Original Washington Rescue Squad, circa 1958
Funding was all donations and the community responded well with help for a truck and equipment. We were one unit serving the entire County. Now there are 9 units.

Now Obama Care would destroy a great and necessary service for small communities across this Nation by forcing these communities to pay for health care for volunteers. Just ask anyone that we cut out of a car or stopped the bleeding in a wreck or picked up in a storm off a sailboat or pulled out of the river from a burning boat or dug out of fallen chimneys in hurricanes. These are real stories for another time. Who will do this under Obama?

Now you know some of the rest of the story.
Go Back