Charter schools are worth the investment

Educational productivity measures the relative return on investment (ROI) for schools and school districts. In other words, what is the relationship between inputs (money) and outputs (test scores)? After all, comparing state, district, or school expenditures in isolation may be popular, but it is not a terribly illuminating exercise.

While the Center for American Progress report referenced above allowed readers to examine ROI for individual school districts in 50 states and D.C., the University of Arkansas report compared productivity between charter and district school sectors in 28 states (including North Carolina) and D.C. That means that ROI statistics for individual charter schools are not available. If researchers reported that data, we would expect to see large variations in charter school ROI within each state.

Nevertheless, charter school proponents will find that the University of Arkansas report provides very good news. According to a Department of Education Reform summary, the research team concluded that "public charter schools are more cost effectiveness [sic] and deliver a higher ROI both on average and in each of the 28 states included in the study." Specifically, researchers found,

Keep in mind that the researchers used data from the 2010-2011 school year. There have been a lot of changes in North Carolina since then. Thanks to forward-thinking legislators who eliminated the cap on charter schools, the N.C. State Board of Education has approved 59 additional charters, of which 31 schools have opened. Also during this period, charter school enrollment has increased by approximately 10,000 students and state funding has jumped by over $75 million. The State Board has also closed four low-performing charter schools.

In addition to productivity, University of Arkansas researchers briefly included comparisons of district and charter school funding levels from an April 2014 report, "Charter School Funding: Inequity Expands." In that report, they awarded North Carolina a D for having a funding disparity that grew to 17 percent between 2007 and 2011. Funding disparities in South Carolina, Georgia, and Florida were much worse.

In sum, North Carolina charter schools are a good investment of our tax dollars. Despite being at a significant funding disadvantage, charter schools are generally more productive than comparable district schools, a trend that I believe will continue for years to come. 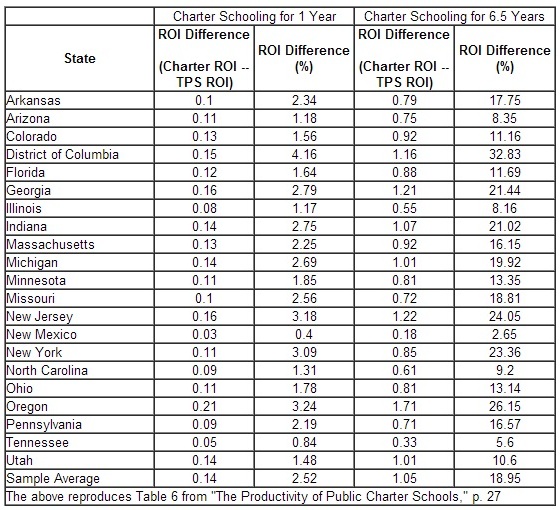 "In all states, charter schools deliver a greater ROI [return on investment] than do TPS [traditional public schools]"