Foreign Policy: Should America Honor its Commitments Abroad or Should we Just Lay Blame?

Login to Send a Private Message to Stan Deatherage
Barack begins anew in a probable second Iraq War, this one of his making.

The Democrats' Lay Blame approach, so far, may have lost this president the War in Iraq, and created instability worldwide; however, it did win him two terms in office and a Nobel Peace Prize. So maybe, the Democrats and their Barry Obama should just look on the bright side - blaming Republicans and George W. Bush for everything: the economy, our foreign affairs did work twice. I suppose the rest of us should just suck it up, and either get with the program, which actually is no program ... none; or just dream and work for the better days ahead, and there is absolutely no guarantee of there being any better days from this point forward. One certainty may be gaining ground: The Democrats' and this Amateur President's Lay Blame game will not succeed a third time. It is getting that bad that people will have to start smartening up and better considering who they vote for to serve as their leaders.

Currently, in a strategic sense, the United States: enjoys little respect overseas, is no longer the 'World's Policeman', and moreover, under this president, the United States has permanently taken the position of 'leading from behind'. Candidate Obama's policy of 'leading from behind' stipulates that: You lose wars already won - Iraq and Afghanistan - then declare the "'Worldwide War on Terror' over"; when a political vacuum forms as an ally is attacked from within, you don't get involved; You make bold statements, 'draw lines in the sand' as in Syria, and do nothing; When the American Consulate is attacked in Benghazi, by terrorists, and your ambassador is murdered, you blame it on an American making an anti-Muslim video, lock him up for years, and do nothing about the terrorists that attacked your consulate on American soil; When Russia re-emerges as a hegemonic power in Eastern Europe, you impose a few sanctions, and ask Vlad Putin how Edward Snowden, as a Russian guest, is getting along ... is he telling you all you need to know about our NSA(?); When you get that rare opportunity to negotiate, you do it with Taliban terrorists, and then you give up 5 of their top guys, get them the Hell out of Guantanamo ("got to close it down!"), for just one American deserter Bo Bergdahl; Declare ISIS (or pronounced ISIL if one works for Barry) a 'JV team', mumble something about 'Kobie Bryant', and do nothing about ISIS or ISIL until they create a Radical Islamic Caliphate the size of Syria in the country that Candidate Obama, 2 1/2 years prior, retreated from in 2011.

Accordingly, after all of this 'leading from behind' intrigue, my great wish would be to ask Barry O., should I be fortunate enough to a member of his MSM for just one day, would be just this: "How's your golf game Mr. President, and if I might followup, in advance, with this query: Where will be the locations of your next series of fundraisers, and where's Michelle traveling to next, and will you be joining her?"

In essence, the world is a dangerous place, the most dangerous since the height of the Cold War, but it is different now. Back in the Cold War, we had Presidents that were engaged, intelligent. Now we have a president that mostly campaigns, plays golf and takes copious vacations, the most by far of any president in modern times. And when finally pressed on just how bad it has all gotten at home and abroad, this campaigning Candidate still blames George W, Bush, and moreover, now, the 'Republicans in congress' for his complete political impotence. 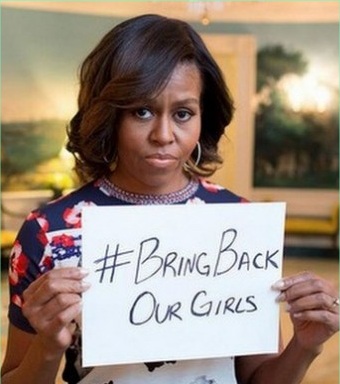 Michele: 'You go girl'. I trust this is something you 'can be finally proud of'.
With the world falling apart, Candidate Obama's authority is well questioned roundly at home, and abroad for: misjudging the terrorists, which he would not actually call terrorists till recently, with no real foreign policy success to 'hang his presidential hat on', save deciding to have bin Laden killed by Seal Team 6, after knowing of Osama's whereabouts for over 100 days, was actually The Candidate's only foreign policy initiative in his first four years on the job. And there was that 'whole' full retreat from Iraq 'thingy'.

Candidate Obama's only real foreign policy initiative in his second term has been his wife's, Michelle's, Twitter campaign "#Bring Back our Girls", describing the Liberal resolve to understand that 276 Nigerian young girls were kidnapped by the Radical Islamists Boko Haram, on April 14th, 2014, for the Islamic sin of these 'females seeking an education'. To date, over 50 of the girls have escaped; however, none have been released by the Islamists, or saved by any government authority. The plus for Democrats is that the twitter campaign did offer Liberals an opportunity, worldwide, to experience moments of self-satisfaction from their well-meaning intentions. Plus, no one died from this peaceful request; none that we know of ... yet.

Currently, in Iraq, a country that we recently controlled to the point of pure peace, relative to what is happening now, Obama's JV analogy is just not holding up to any reasonable scrutiny, and, consequently, thousands of: Christians, Kurds and peaceful Sunni Muslims are being murdered by the "JV Team" - the heads of innocent women and children placed on stakes as Jihadist trophies, while sporadic collections of Christian men are crucified, in public display, as some sort of cruel Islamist joke. Pure evil does exist Mr. Obama, and you played an integral role in providing it a proper home base for it to thrive.

Remarkably, Candidate Obama has stopped with the "JV Team" analogy, and even more remarkably, The Candidate has, on infrequent occasion, even used the word "terrorists" in describing ISIS (or pronounced ISIL if one is The Candidate, or if one is on Barry's team). Candidate Obama watched all this transpire for months after the "JV Team", became the varsity and then went pro, and now, finally, is implementing limited aid to these affected parties (the ones whose loved ones were beheaded by the thousands), and bombed a few targets - some of them formerly United States military hardware.

For many of us, not caught up in all this Obama mania for going on nearly a decade, it will be a waiting game to see how this "Amateur President" wins the peace in a country that he ceremoniously retreated from in 2011. At some point it, The Candidate may find that it helps to wealth of knowledge surrounding you, even if you do not possess such yourself.
Go Back