Published: Saturday, August 30th, 2014 @ 5:17 pm
By: John Locke Foundation   ( More Entries )
Publisher's note: We believe the subject of history makes people (i.e., American people) smarter, so in our quest to educate others, we will provide excerpts from the North Carolina History Project, an online publication of the John Locke Foundation. This one hundred and seventeenth installment, by Jonathan Martin, is provided courtesy of the North Carolina History Project, and re-posted here with permission from NC Historic Sites.

Found in Yancey County, Mount Mitchell is the largest mountain in North Carolina. The tall peak is part of the 15-mile long Black Mountain Range; the range itself contains six of the ten tallest mountains in the eastern United States. At 6,684 feet, Mt. Mitchell remains the highest point in the state as well as in the eastern part of the country. 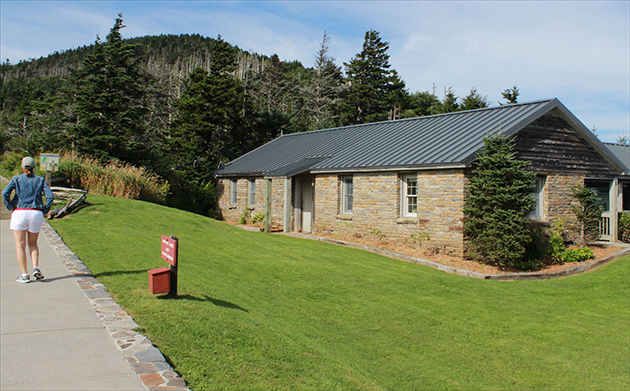 At well over 6,000 feet above sea level, the ranger's station is on the southern shoulder of the peak of Mount Mitchell, which is in the background: Above. The parking lot, near the summit of Mount Mitchell is extremely high: Below.     photos by Stan Deatherage    Click image to expand. 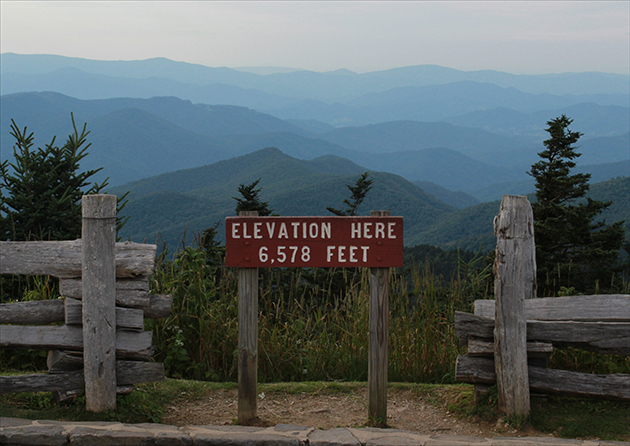 Of the many mountain Native American tribes, the Cherokee were the prominent tribe to hunt and explore Mt. Mitchell before the arrival of European settlers. After the American Revolution, white settlers had crowded the Cherokee out of the Black Mountain Region and away from the state's tallest peak. 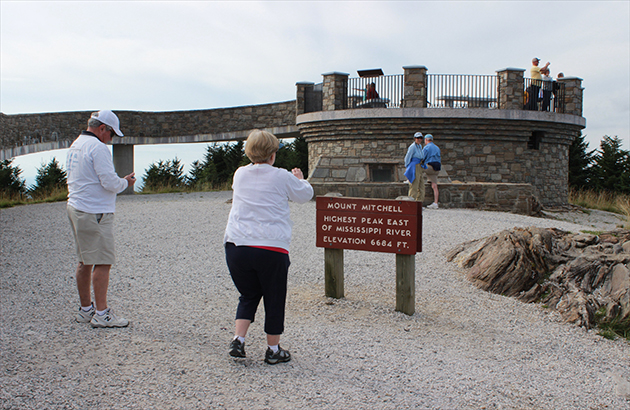 At the summit of tallest mountain of the oldest mountain range in the world: Above. But, before one can reach the summit, they must take a leisurely, oxygen depleted, walk up this constructed trail. Mt Craig, at 6,647 feet is the second tallest peak in eastern United States, is in the background: Below.     photos by Stan Deatherage    Click image to expand. 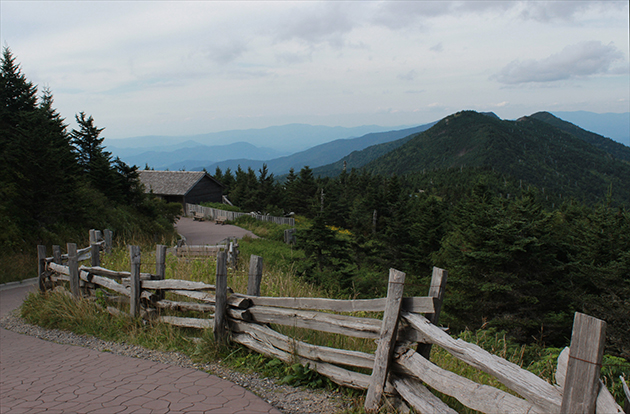 Andre Michaux, a French scientist and botanist, is believed by some historians to be the first European to climb Mt. Mitchell in 1789. John Fraser, an English counterpart to the French botanist Michaux, explored the region during the late 1700s. Fraser fir trees, naturally found in the Black Mountains, are named for the English botanist.

Mt. Mitchell is named in honor of Elisha Mitchell, a professor who taught at the University of North Carolina. In the mid-1830s, Mitchell explored the Black Mountains and studied its height of through barometer readings. During this time, many scientists had assumed Grandfather was the tallest peak in North Carolina, but these claims were eventually rebutted by Mitchell's study. 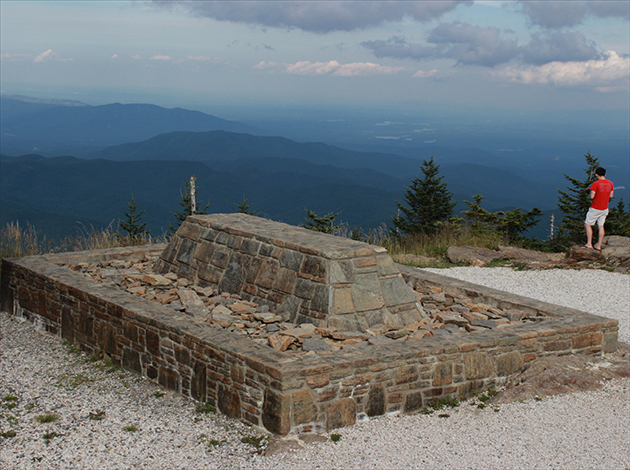 At the summit of tallest mountain of the oldest mountain range in the world is the final resting place of Elisha Mitchell. Here, looking northeast toward Boone, NC: Above. Here, we look down at the constructed trail to the summit, with the lower eastern peaks of the Blue Ridge Mountains in the background: Below.     photos by Stan Deatherage    Click image to expand. 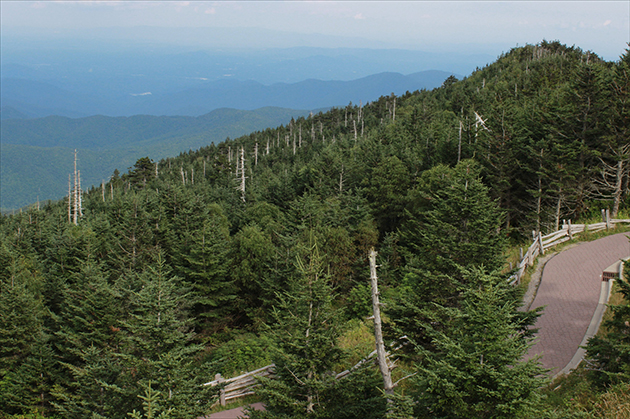 After Professor Mitchell revisited the region in 1838 and 1844, he "determined that the highest point in eastern America was in the Black Mountains, rather than in the White Mountains of New Hampshire, as was previously believed" (Powell, p. 769). Mitchell concluded that Mt. Mitchell was 6,672 feet tall, only twelve feet off the true height of the mountain.

Congressman and former student of Mitchell's, Thomas Clingman, debated whether Mitchell's calculations were correct. After Mitchell had made his calculations, Professor Mitchell and Congressman Clingman argued over the location of North Carolina's highest mountain. During the summer months of 1857, Mitchell sought to build upon his claim and he embarked on a hike on Mount Mitchell. However, his journey proved fatal "when he slipped and fell from cliff near a 40-foot waterfall, hitting his head and drowning"; he was sixty-three years old (Powell, p. 770).

After Mitchell's death his body was eventually interred at the summit of Mt. Mitchell. Governor Zebulon Vance became an ardent support of Mitchell's evidence, and the mountain was named in his honor. 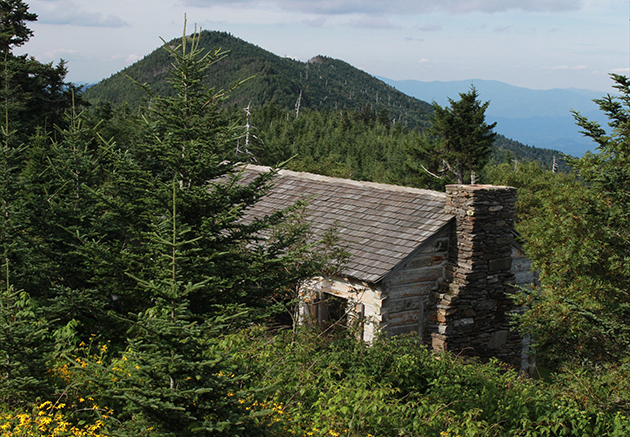 A mountain cabin in the foreground, and Mt. Craig in the background: Above. Here, at the dizzying heights of nearly 5200 feet above sea level, on the Blue Ridge Parkway, we are not looking down in a valley, but up to tallest mountains east of the Mississippi: Below.     photos by Stan Deatherage    Click image to expand. 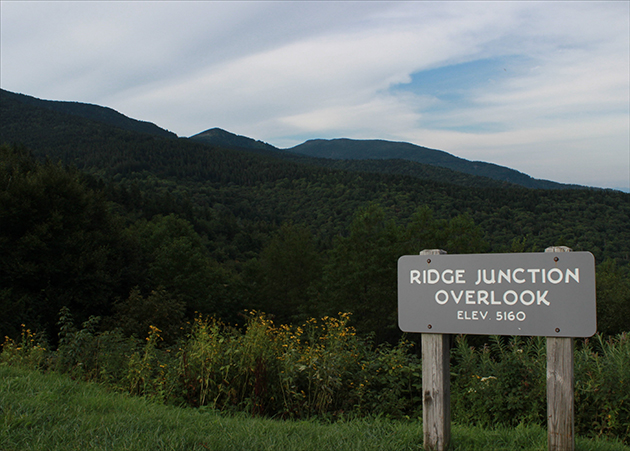 In 1940, the North Carolina public finally had access to the tallest peak in the state when a public road was completed. Eight years later, N.C. Highway 128 was finished offering tourists a new parkway to view and travel to the mountain. The greatest boost to tourism occurred with the completion of the Blue Ridge Parkway in 1950. That same year 200,000 tourists visited the peak.

UNESCO, the United Nations Educational, Scientific, and Cultural Organization, declared Mt. Mitchell an International Biosphere Resources in 1993. Since its distinction, Mt. Mitchell entered "an elite group of sites throughout the world that are protected for the purpose of discovering the solutions to problems of conservation, sustainable development, and other issues" (Powell, p. 770).