Login to Send a Private Message to Stan Deatherage
Publisher's note: My apoligies to our readers on this post that we could not hit all the high low points of Eric Holder's administration of a DOJ that became: more incompetent in practice, prejudiced in purpose, and divisive to the point of Racism than any DOJ in modern times. There will, however, be more time in the future to deal with these certain and pertinent truths.

Lawless Attorney General Eric Holder resigned today, Septem 25, 2014, leaving his top client, Amateur Obama, in a less defensible position in regards to the long list of scandals that plague his administration, which well reflects The Amateur's poor ability to make wise or even truthful decisions.

Eric Holder, as the nation's 'top cop' as attorney general, worked nearly exclusively to shield his old friend, the nation's first Affirmative Action President, B. Hussein Obama, from multiple scandals, where bad judgement or illegal activities were at their very core. In these scandals that are a product of Amateur Obama's poor or unlawful behavior, the more notable are: former EPA Director Lisa Jackson's unfair targeting scandal and cover-up (no investigation); the Benghazi debacle, mismanagement of message and resultant cover-up No investigation); Black Panthers' voter intimidation in Philadelphia, Pa (no investigation); the spying on FOX News Journalist James Rosen case; and the IRS targeting of political enemies, the intricate cover-up, and lying of IRS officials (no investigation). 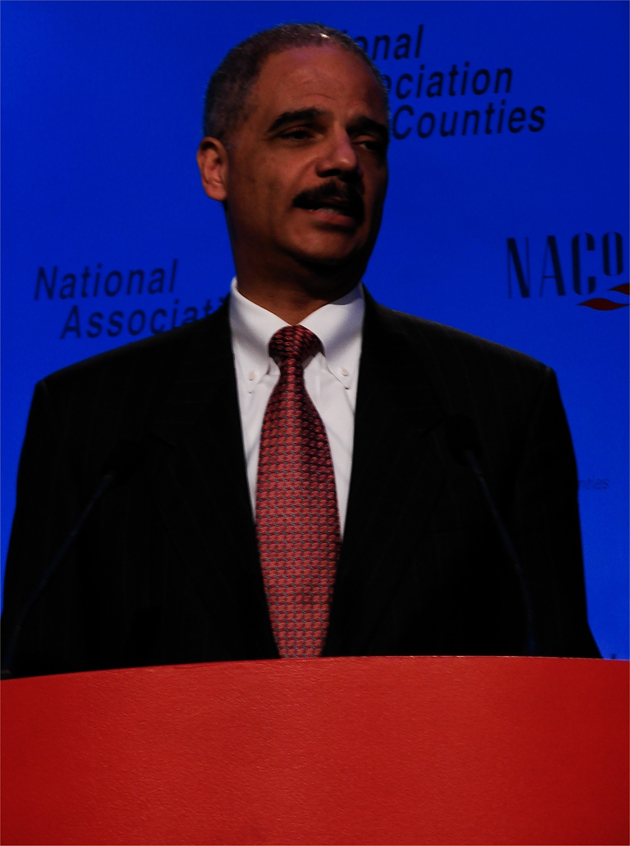 Lawless Attorney General Eric Holder speaks to some of the county commissioners, form across the United States, in March, 2011: Above.    photo by Stan Deatherage

As an attorney general, Eric Holder still has an ongoing, unsettled Contempt of Congress charge, with many unanswered questions over his own 'Fast and Furious' gun running scandal, his lying to congress over the James Rosen spying incident, and his ongoing charade of an investigation over the Benghazi terrorist attack that took Holder's FBI over 3 weeks to initiate investigations, which has yielded only one suspect from a public attack that was recorded by security cameras, and a bevy of eyewitnesses accounts from the consulate employees, who were saved by CIA contract commandos, who disobeyed Amateur Obama's orders for them to "Stand Down" on that fateful 9/11, 2012 night.

Mostly, the lawless Eric Holder used his nearly 6 years on the job to act as B. Hussein Obama's taxpayer paid for personal counsel, his legal muscle, who had the power of his public position to prosecute those that were out of favor with Candidate Obama, and himself, while shielding himself, and his good friend, America's first Affirmative Action Resident, from the troubling dictates of a constitutional government. Eric Holder, like The Amateur swore to defend that document, but instead harnessed the power of their respective offices to play a 'cat and mouse game' with congress, the supreme court, and, ultimately, the truth, which was never a pertinent factor for this administration, or this attorney general.

As America's taxpayer paid attorney general, as America's 'top cop', with poser of his immense staff, Eric Holder was much more inclined to avail himself to the political machinations of only serving Candidate Obama, and his low information voting base. Rather than keeping and protecting our laws, the Lawless Attorney General was more preoccupied with race over facts, and politics over integrity. In the sum of his nearly 6 year legacy, as our attorney general, Eric Holder will be remembered as the most incompetent and dishonest AG of modern times, and that includes John Mitchell, who was prosecuted during the Watergate investigations, and served some notable time in prison.

While there will be no chance now of Eric Holder finally being Impeached, should the Republicans gain control of the U.S. Senate and extend their gain of seats in the U.S. House, there is the possibility of a future indictment due to his lawless activities in regards to his dishonorable and illegal behavior as attorney general, of which there was quite an ungracious plenty.

There is one anticipated downside for Amateur Obama. The Amateur will have a tough time with a new Republican Senate, should that majority exist, confirming his appointment if there is any hint of the impropriety that was Eric Holder's Department of Justice.