Pulp Fiction | Beaufort County Now | Just the film title itself, "Pulp Fiction" denotes a lightweight film. If one dissects the story, the message, the importance of the film, "Pulp Fiction" comes up light.

Lightweight Subject is Built into a Heavyweight Classic

Just the film title itself, "Pulp Fiction" denotes a lightweight film. If one dissects the story, the message, the importance of the film, "Pulp Fiction" comes up light. Under most circumstances most people should ask themselves 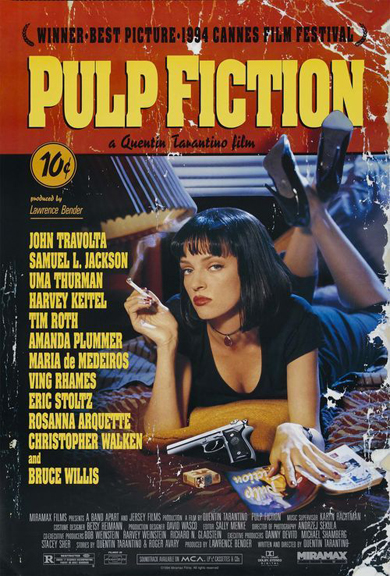 why they could possibly enjoy this film, and the answer is; it must be magic.

Not all films have that good fortune. Many films have a great script telling an important story, with good actors, a competent director and still it may become a good film, but not a classic. Not with the sleeper hit of 1994 - "Pulp Fiction." Quentin Tarantino's classic mixes an outstanding script, built on some really smart, peppy dialogue with perfectly cast actors, from which Tarantino produced a perfectly entertaining film. I should know, I could not remember the many times that I have seen all or part of this film. Yes, "Pulp Fiction" certainly is not an important film. It exists for one reason only - to entertain. In this capacity, the film is quite sufficient.

The dialogue: from Jules Winnfield, played by an virtual unknown Samuel L. Jackson, discussing his future life, post wise-guy, with Vincent Vega, played by a forgotten John Travolta, that he would, "walk the earth like Kane (from Kung Fu) and get into adventures and such," to taking a dead guy named Marvin, played Phil LaMarr (on "Mad TV," back when it was funny) to a white guy named Jimmie, played by Quentin Tarantino,

Jules: "Mmmm! Goddamn, Jimmie! This is some serious gourmet shit! Usually, me and Vince would be happy with some freeze-dried Taster's Choice right, but he springs this serious GOURMET shit on us! What flavor is this?"
Jimmie: "Knock it off, Julie."
Jules: "What?"
Jimmie: "I don't need you to tell me how fucking good my coffee is, okay? I'm the one who buys it. I know how good it is. When Bonnie goes shopping she buys SHIT. I buy the gourmet expensive stuff because when I drink it I want to taste it. But you know what's on my mind right now? It AIN'T the coffee in my kitchen, it's the dead nigger in my garage."
Jules: "Oh, Jimmie, don't even worry about that..."
Jimmie: "No, No, No, No, let me ask you a question. When you came pulling in here, did you notice a sign out in front of my house that said Dead Nigger Storage?"
Jules: "Jimmie, you know I ain't seen no..." 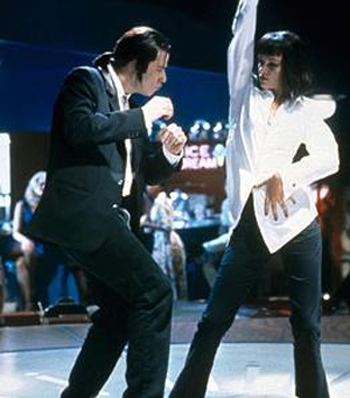 Jimmie: "Did you notice a sign out in front of my house that said Dead Nigger Storage?"
Jules: (pauses) "No. I didn't."
Jimmie: "You know WHY you didn't see that sign?"
Jules: "Why?"
Jimmie: "'Cause it ain't there, 'cause storing dead niggers ain't my fucking business, that's why!"

Crude and very offensive Language, right? This is just the tip of the proverbial iceberg when it comes to the offensive language question, and, consequently, the crude language is never truly the issue, because the film is so damn good. Paradoxically, the crude language is both offensive to our civilized sensibilities, while enhancing the quality of the dialogue. Paradoxical in scope, but one is forced to keep the reality of "Pulp Fiction" in the context of the characters that inhabit the screen: the aforementioned wise guys, Jules and Vincent, a gansta' thug, a drug dealers, multiple drug addicts, sadistic perverts, and a traumatized Viet Nam War Veteran, Captain Koons, played in total deadpan by the enigmatic Christopher Walken, in just this one scene, speaking to a young boy, Butch, later played by Bruce Willis as an adult washed up boxer,

Captain Koons: "The way your dad looked at it, this watch was your birthright. He'd be damned if any slopes gonna put their greasy yellow hands on his boy's birthright, so he hid it, in the one place he knew he could hide something: his ass. Five long years, he wore this watch up his ass. Then when he died of dysentery, he gave me the watch. I hid this uncomfortable piece of metal up my ass for two years. Then, after seven years, I was sent home to my family. And now, little man, I give the watch to you."

Later in the that young man's life, he grows into a washed-up boxer, and double-crosses gansta' thug Marcellus, played by the great character actor Ving Rhames, and as only Tarantino can stage it; 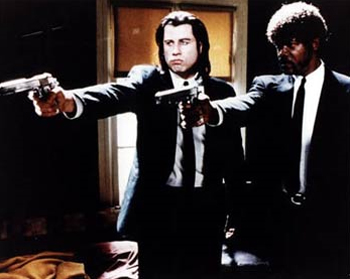 winds up as allies with "Uncle Marsellus" as they fight their way out of the dungeon of a sadistic homosexual pervert, named Zed. After the ball-gag is removed from Marcellus's mouth, he philosophically discusses their respective futures after Butch uses a pawnshop samurai sword to save Marsellus from the perverted rapist,

Butch: "You okay?"
Marsellus: "Naw man. I'm pretty fuckin' far from okay."
Butch: "What now?"
Marsellus: "What now? Let me tell you what now. I'ma call a coupla hard, pipe-hittin' niggers, who'll go to work on the homes here with a pair of pliers and a blow torch. You hear me talkin', hillbilly boy? I ain't through with you by a damn sight. I'm a get medieval on your ass."
Butch: "I meant what now between me and you?"
Marsellus: "Oh, that what now. I tell you what now between me and you. There is no me and you. Not no more.
Butch: "So we cool?"
Marsellus: "Yeah, we cool. Two things. Don't tell nobody about this. This shit is between me, you, and Mr. Soon-To-Be-Living-The-Rest-of-His-Short-Ass-Life-In-Agonizing-Pain Rapist here. It ain't nobody else's business. Two: you leave town tonight, right now. And when you're gone, you stay gone, or you be gone. You lost all your L.A. privileges. Deal?"
Butch: "Deal."
Marsellus: "Get your ass out of here."

Butch hightails it out of that pawn shop, with the basement dungeon, and makes it back to the motel where his French girlfriend waits patiently after a breakfast of blueberry pancakes:

Fabienne: (with a sweet French accent) "Where's my Honda?"
Butch: "Sorry, baby, but I had to crash that Honda."

Butch tells her to get immediately on the chopper he took from the rapist Zed, because they need to leave immediately as requested by Butch's new best friend, Marsellus Wallace.

And that's the film: character driven and verbose to the maximum. This film is the antithesis in verbosity of Sergio Leone's "Once Upon a Time in the West," but very similar in the representation of a very wild west: gun fights, thieves and other dishonorable men, including an obligatory rape scene - just a bit different in the context of same sex. Hey, but blame that on Quentin being Quentin, and Sergio having Claudia Cardinale on that film's roster.

"Pulp Fiction" won one Oscar for Best Screenplay Written Directly for the Screen for writers Quentin Tarantino and Roger Avary, and was nominated for quite a few more, including one for John Travolta, which rejuvenated his career, and one for Samuel L. Jackson for Best Supporting Actor, which catapulted Jackson's fine career to greatness. Jackson is so good as Jules and much of the richest dialogue is his with whomever he is sharing that scene with. Samuel L. Jackson should have won the Oscar for his role as the hitman in transition, but, that's just my opinion.

In fact, every actor in this film was a valuable asset to its success. In particular, but heretofore unmentioned was Uma Thurman as Marsellus' wife, Mia, and Harvey Keitel as Mr. Wolf. They helped make this film the second best film in 1994 after that year's ultimate classic, "Forrest Gump," and one of the 100 best films (on almost everyone's list, including mine) ever made. Kudos.