I Pledge Allegiance | Beaufort County Now | I guess I learned the Pledge of Allegiance way back in 1946 when I was in the first grade. I am sure I didn't really understand the implications but it didn't take long before I could recite it from memory. | Pledge of Allegiance, United States of America, patriotism, patriotic

Login to Send a Private Message to George H. Schryer
Publisher's Note: This article first appeared in the Beaufort Observer.

I guess I learned the Pledge of Allegiance way back in 1946 when I was in the first grade. I am sure I didn't really understand the implications but it didn't take long before I could recite it from memory.

On February 26th 1957 I took my first oath of enlistment in the United States Navy and then every four years thereafter in the United States Air Force for the next 20 years. Once I took the oath when I was on a combat mission flying at 35,000 feet over the DMZ in South Vietnam. I view the tradition Pledge of Allegiance and the oath our service people take as essentially the same.

What do these words mean? The American Heritage Dictionary defines Pledge as: "A solemn binding promise to do, give, or refrain from doing something."

How about Allegiance? Again the American Heritage Dictionary defines the word as: "Loyalty or the obligation of loyalty to a nation, cause or sovereign" The definition of oath is: "A solemn formal declaration or promise to fulfill a pledge" and Swear (as in to swear an oath): "To make a solemn declaration, invoking a deity or a sacred person or thing in confirmation of and witness to the honesty or truth of such a declaration".

Our Presidents, Governors, other public office executives, and even some fraternal organization leaders must also take an oath upon entering office. Do any of them realize the gravity and importance of the oath that they are taking? Apparently not when you consider their actions after the fact. 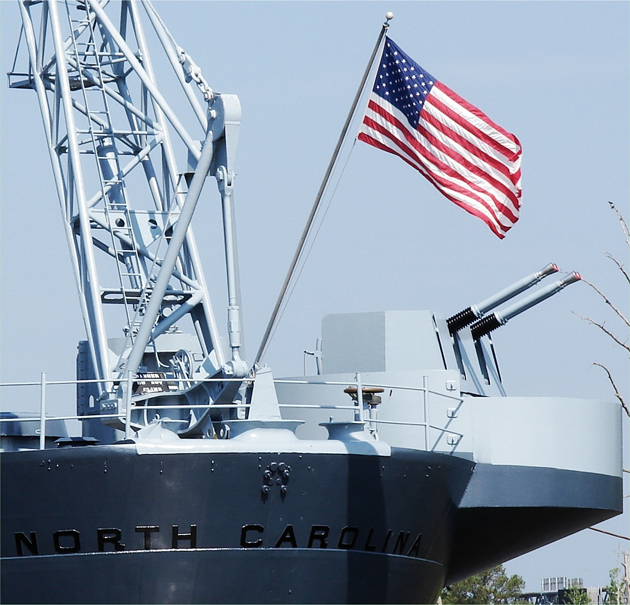 We pledge allegiance to the nation that protects us against aggression and evil. Nothing speaks more to that ability to take care of her people than the might of the US Navy. The US Navy became the strongest navy in the world in the summer of 1942, and has remained such since that time. The USS North Carolina played its part in that transition.     image by Stan Deatherage

Yet by his actions it sometimes appears that he believes his allegiance is to those who worked/paid to get him elected. Many, if not most, of our Congressional representatives are doing the same.

(a) Enlistment Oath.-- Each person enlisting in an armed force shall take the following oath:

(b) Who May Administer.-- The oath may be taken before the President, the Vice-President, the Secretary of Defense, any commissioned officer, or any other person designated under regulations prescribed by the Secretary of Defense. I believed that that oath was for a lifetime and does not end with discharge; so as long as I have breath in me I will continue to abide by that oath. To do otherwise, I feel, would be to denounce my citizenship and this I will not do.

Our president continues to issue edicts without the consent of Congress. Congress ignores their responsibility by allowing him to do so. Not one will stand up and say "Hey wait a minute, you can't do that." There is no evidence that either branch or political party can say that they are "Preserving, protecting or defending" the Constitution.

Unfortunately the American public, because they have allowed themselves and their children to remain uneducated, ignore the responsibility they have in this fiasco. I am not rich, nor am I poor, but it is my responsibility to educate myself and my children with critical thinking skills so we can recognize the terrible plight we are in.

Should this erosion of Constitutional Law continue I feel this country will end up like all the other socialist countries with a powerful dominating elite class and a poor peasant class.