North Carolina has long faced challenges with aging infrastructure - and with a rapidly growing population, our state's needs are also rapidly growing. In recent months, Gov. McCrory has led the way in advocating for taking advantage of historically low interest rates on government bonds to fund much-needed repairs and replacements of our state facilities.

This week, the Senate answered the governor's call and approved a final $2 billion bond package to support critical infrastructure needs in our state's public universities, community colleges, National Guard installations and local water and sewer systems. Voters will cast their ballots on the proposal during the March 2016 primary election.

Among other items, the final proposal includes:

•  $980 million to upgrade science, engineering and business education facilities at 14 public university campuses and to support repairs and renovations at campuses statewide;

• $8.5 million to a public safety training academy; and

• More than $300 million in grant and loan programs to improve water and sewer infrastructure in communities statewide.

Key highlights of the final proposal for Northeastern North Carolina include:

•  $6,557,819 to Beaufort County Community College for new construction, repairs and renovations. Under this proposal it allocates $2,811,359 more than what was originally proposed from the House;

•  $6,590,687 to the College of The Albemarle for new construction, repairs and renovations. Under this proposal it allocates $1,727,304 more than what was originally proposed from the House;

•  $2,830,500 to Pettigrew State Park located in Tyrrell and Washington Counties.

Two billion dollars is a lot of money to ask our taxpayers to borrow, and I hope voters will weigh the proposal carefully when deciding how to cast their ballots. But once they consider the long-term value to our state, I'm sure they will agree this bond is a good investment in North Carolina's future. 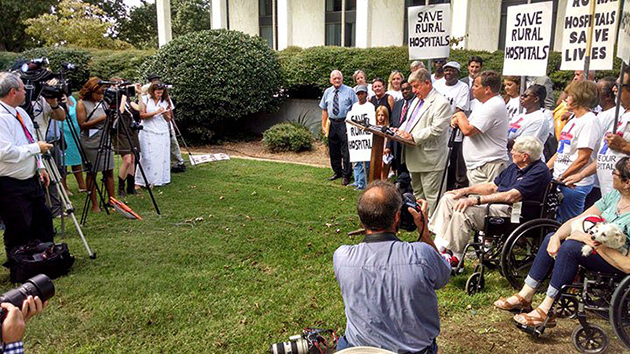 Attending a press conference on how to help our rural hospitals compete and operate in North Carolina.

In the wake of a national scandal exposing how some providers of abortions sell aborted babies' remains for profit, an overwhelmingly bipartisan Senate moved on Thursday to prevent that from happening in our state. While federal law prohibits the sale or purchase of aborted fetal tissue, it has become apparent that policy can be circumvented.

The passed legislation will:

•  Make it a Class I felony to engage in the sale of unborn babies' body parts, no matter the cause of death, while allowing mothers who lose their babies due to a natural miscarriage an option to donate remains to scientific research.

In addition, this year's state budget, which was signed into law last week, makes clear that no state funds for family planning services shall be provided to organizations that offer abortions. The very least we can do is provide some level of dignity to babies who lose their lives in an abortion. This legislation will prevent abortion providers in North Carolina from profiting from the death of unborn children.

The Senate also tentatively passed a bill this week to ban N.C. localities from acting as 'sanctuary cities' that ignore federal laws against illegal immigration.

Earlier this year, national news outlets reported that the suspected murderer of a California woman was in the U.S. illegally and could have been deported, but instead was given safe harbor by a so-called 'sanctuary city' refusing to enforce immigration laws. And in North Carolina, a number of local governments have adopted resolutions similar to those of other 'sanctuary cities' across the country.

In response, the Senate legislation would prevent counties and cities statewide from enacting local ordinances that violate or fail to enforce federal immigration laws. It would also prohibit local policies forbidding law enforcement from asking about the immigration status of those they arrest or detain or sharing that information with federal authorities.

The bill would also:

•  Require that state and local governments follow the same rules as the private sector and only hire government contractors who comply with state and federal E-Verify laws, as proposed by the N.C. House;

•  Make clear that matricula consular documents issued by foreign embassies may not be used to determine a person's identity or residency, as proposed by the House; and

It's just plain common sense that cities and counties ought to be enforcing federal immigration laws and not harboring illegal aliens at the potential expense of their own citizens' safety. While it's sad we had to pass this bill, it will help make sure localities follow the law.