Published: Tuesday, January 19th, 2016 @ 12:40 am
By: John Locke Foundation   ( More Entries )
Publisher's note: The author of this post is Don Carrington, who is executive editor for the Carolina Journal, John Hood Publisher. 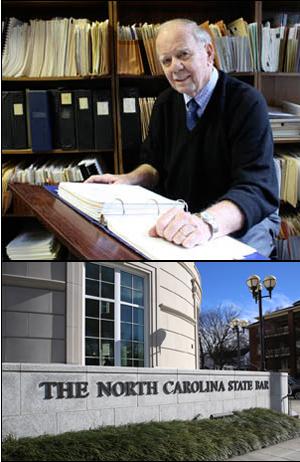 CJ Photos by Don Carrington
Raleigh attorney Gene Boyce (top photo) has asked a court to force the N.C. State Bar to acknowledge allegations of professional misconduct by Attorney General Roy Cooper starting with Cooper's 2000 campaign.
RALEIGH     A longstanding feud between Raleigh attorney Gene Boyce and state Attorney General Roy Cooper that appeared to be over in 2014 reignited last week, when Boyce filed a complaint against the North Carolina State Bar claiming that Cooper should be investigated for professional misconduct.

Boyce claims that starting in 2000, Cooper knowingly made false statements that harmed the reputation of Boyce and his law partners. Seeking to force an investigation, on Jan. 5 Boyce filed a formal complaint in Wake County Superior Court against the North Carolina State Bar, the state agency that regulates attorneys.

Boyce is asking the court for a declaratory judgment forcing the State Bar to acknowledge Boyce's claims of Cooper's misconduct; declare that the State Bar has a conflict of interest in the matter; and refer the matter to an appropriate alternative agency for investigation, findings of fact, and discipline if appropriate.

The dispute began in 2000, when Cooper was the Democratic Party's nominee for attorney general and his main opponent was Republican Dan Boyce, Gene's son. Cooper won that race and has served as attorney general since then. He currently is a Democratic candidate for governor.

The Boyces and their law partners Philip and Laura Isley in 2000 filed a defamation lawsuit against Cooper based on ads run by the Cooper campaign committee. The lawsuit alleged that Cooper and his committee ran a political ad that was defamatory and constituted an unfair and deceptive trade practice. It also charged that Cooper and his committee participated in a conspiracy to violate a North Carolina law prohibiting false ads during election campaigns. A trial court judge dismissed the lawsuit, but appellate courts ruled in Boyce's favor on several occasions, and in 2014 the matter was scheduled to go to trial.

The dispute appeared to be over in April 2014 when Cooper issued a written apology to Boyce for statements Cooper's political campaign made in the political ads. The parties signed an agreement ending the civil action, but Boyce's complaint before the State Bar says Cooper's conduct is a separate issue that the State Bar must address.

Boyce has been practicing law since 1956. He served as assistant chief counsel to the Senate Watergate Committee, working with U.S. Sen. Sam Ervin, D-N.C., on the investigation of President Nixon's 1972 presidential campaign.

When asked for comment, Boyce told Carolina Journal the information in the complaint spoke for itself.

Noelle Talley, Cooper's spokeswoman, told CJ the attorney general's office had no comment on the complaint.

One week before the 2000 election, Cooper's campaign started running a television ad that read: "I'm Roy Cooper, candidate for attorney general, and I sponsored this ad. Dan Boyce: His law firm sued the state, charging $28,000 an hour in lawyer fees to the taxpayers. The judge said it shocks the conscience. Dan Boyce's law firm wanted more than a police officer's salary for each hour's work. Dan Boyce - wrong for attorney general." The ad contained several untrue statements. When the advertisement was running, the Boyces and Isleys were partners at the Boyce & Isley law firm in Raleigh. Dan Boyce did not work on the lawsuit referenced in Cooper's ad (the Smith case), and the Boyce & Isley law firm had not been created. The Smith lawsuit was filed by Gene Boyce and attorneys from the Womble Carlyle Sandridge & Rice law firm.

Gene Boyce was not running for attorney general, and he did not charge taxpayers $28,000 an hour. Legal fees in class-action lawsuits are set by the judge, and the final payment to the attorneys was much lower than the amount alleged in the ad.

On the second day the ad ran, Boyce & Isley notified Cooper's committee in writing about the statements in the ad and requested that an immediate retraction. Cooper ignored the request and continued running the ads, the lawsuit stated. Gene Boyce said Cooper's ad ran at least three times a day for seven days on more than 20 television stations.

The Boyces and Isleys filed their lawsuit the day before the election, naming Cooper, the Cooper (political) Committee, and campaign aide Julia White as defendants. In three court filings in 2003 and 2008, Cooper stated, "The political advertisement is true."

Gene Boyce assumed the lead role in the lawsuit against Cooper. "That ad was false and the Cooper team knew it," Boyce told CJ in 2013. "They implied we were crooks. I want my name cleared. I did not cheat my clients. The public record has shown the statements in the ad to be libelous. My main purpose in pursuing this is to get a decision that the ad is false. I want the record to be clear."

In 2014 the State Bar became aware that on two occasions, Hicks signed forms stating he attended continuing legal education programs sponsored by the State Bar. Hicks claimed full credit for his attendance even though he had not attended enough hours to qualify for the credit he claimed.

Rule 8.4 of the North Carolina State Bar provides in part that it is professional misconduct for a lawyer to "engage in conduct involving dishonesty, fraud, deceit, or misrepresentation." Hicks acknowledged that he had not attended all the credit hours he claimed, even though he signed the attendance forms.

Instead of handling the discipline through the State Bar, the matter was referred to Wake County Superior Court Judge Donald Stephens.

"Attorney Hicks has no history of previous attorney misconduct resulting in disciplinary action and has admitted and expressed remorse for this misconduct. The court finds and concludes that attorney Hicks intentionally engaged in professional misconduct and that such was willful and did not result from mistake, inadvertence, or neglect. The court has considered all available sanctions and finds that a public reprimand should be issued in this matter. A public reprimand is a serious form of attorney discipline and is warranted for professional misconduct of this nature," Stephens wrote.

By issuing a reprimand, Stephens added, "This sanction shall serve as a strong reminder of the high ethical standards of the legal profession."

Hicks is still employed by the N.C. Department of Justice.
Go Back