Governor McCrory Announces $100,000 Memorial Fund on 25th Anniversary of Persian Gulf War | Eastern North Carolina Now | This week marks 25 years since the United States, as part of a 34-nation coalition, drove Saddam Hussein's Iraqi army out of Kuwait, returning that nation's sovereignty and reshaping the U.S. military to the force it is today.

This week marks 25 years since the United States, as part of a 34-nation coalition, drove Saddam Hussein's Iraqi army out of Kuwait, returning that nation's sovereignty and reshaping the U.S. military to the force it is today. 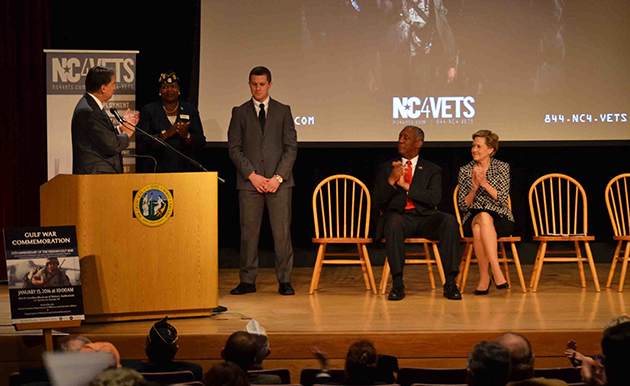 "We are grateful for this generous gift," said Secretary Kluttz. "We are always honored to be able to commemorate the courageous acts of our service members who are selfless in their actions to protect our freedoms."

North Carolina has been in possession of the $100,000 since the gift was made by the Kuwaiti Government in 1992 as seed money for a larger memorial. For a variety of reasons, the effort stalled and the money sat unused for 24 years, until now. The fund will be distributed to the Museum of History on the 25th anniversary of the start of Operation Desert Storm on January 17, 2016.

"Utilizing this fund and championing the proper maintenance and upkeep of our heroes' final resting place is a direct result of our creation of the new North Carolina Department of Military and Veterans Affairs," Governor McCrory continued. "This fund sat unused and languished for years until real action was taken to distribute the funds in the best way possible to honor our veterans and those who sacrificed their lives."

More than 75,000 Soldiers, Marines, Sailors, and Airmen stationed in North Carolina served during the Persian Gulf War in support of the liberation of the Kuwait; providing 40 percent of the combat power.

"Twenty-five years ago, North Carolina's Active Military, Reserve and National Guard were called upon to embark on a new mission in support of the liberation of Kuwait. The actions of these men and women continue to be evident in actions taken to promote freedom, democracy and prosperity in the Middle East region. We must continue to honor and cherish the values of North Carolinas service members and continue to pay tribute to all of the military personnel who served and gave their lives during the war," said Secretary Wilson.

Governor McCrory also announced a directive to his administration to find additional resources for veteran cemeteries and made a commitment that they will be supported in his proposed budget.

Governor McCrory has signed a proclamation recognizing the 25th anniversary of the Persian Gulf War. You can find the proclamation here.