Two Days in the Aftermath of Hurricane Irene: From Photo Ops to Photo Extreme

Login to Send a Private Message to Stan Deatherage
Publisher's Note: It has been more than two weeks since the striking force of Hurricane Irene battered northeast North Carolina, and life goes on, with much responsibility to continue in the shadow of this terrible storm.

Consequently, I have had little time to publish articles, if only to provide a historical perspective of that storm. To that effect, I begin a series in the "Every Picture Tells a Story ... Don't it" motif. Here below is the first in the series.

On Monday, August 29, 2011, two days in the aftermath of Hurricane Irene, the Emergency Management team continued their exhaustive work, but took a break to meet with the politicians, who visited Beaufort County to witness the destructive power of the massive storm. 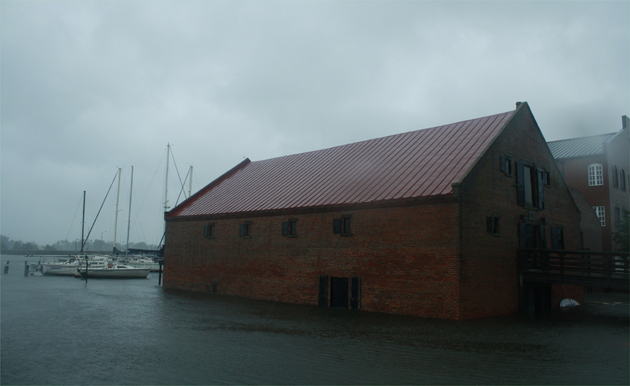 Washington, NC took a beating from Hurricane Irene along its waterfront. These pictures, at Haven's Wharf, were taken in mid-morning before the height of the storm: Above and below.     photos by Stan Deatherage 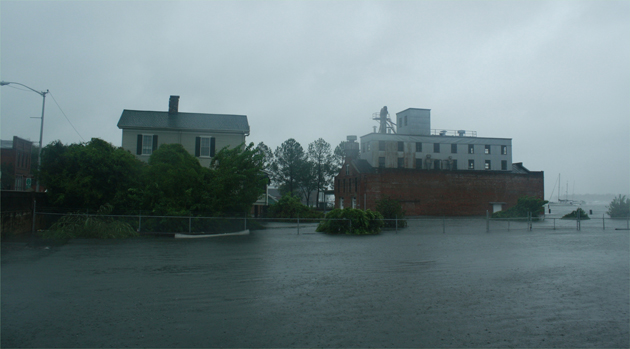 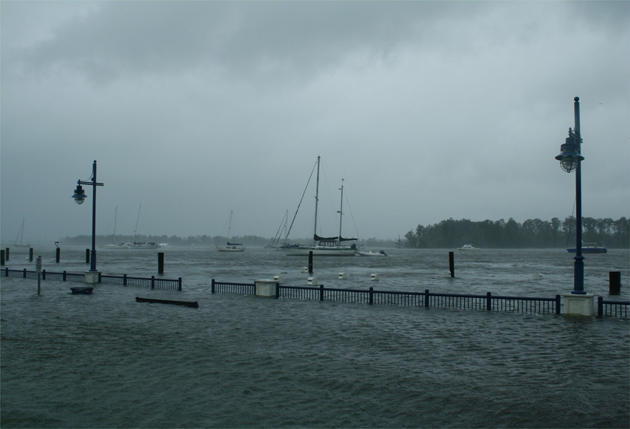 These images were made around 10:25 am, Saturday, August 27, 2011. The winds were now at hurricane force, sweeping water over the bulkhead protecting Washington's waterfront, and further across the Stewart Parkway and into the downtown area. The height of the storm was yet to bring the massive eye-wall to bear upon Beaufort County: Above and below.     photos by Stan Deatherage 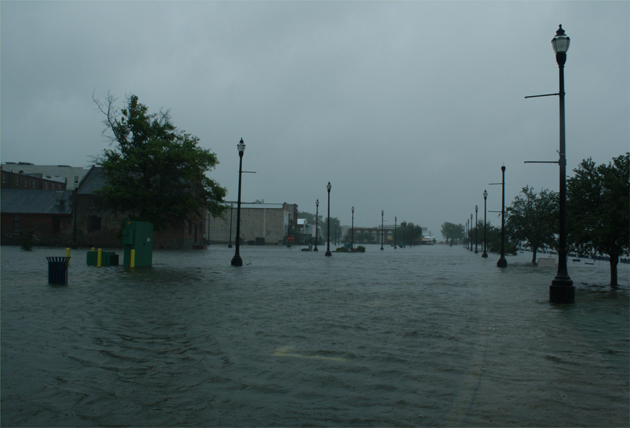 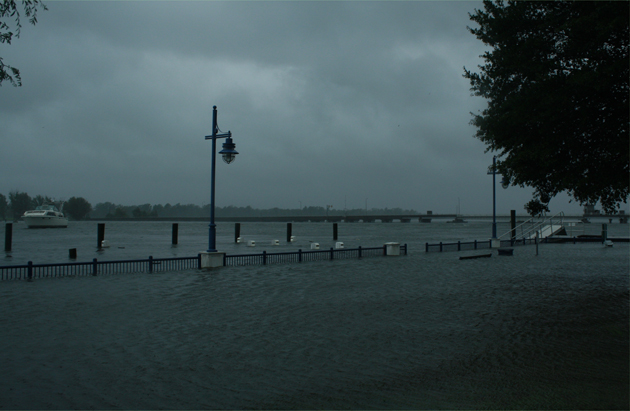 Looking northwest toward the U.S. Hwy. 17 Business bridge, we see the Washington, North Carolina waterfront under about 5 1/2 feet of Pamlico River water. I heard that over 10 feet of water was pushed up the river before the storm was finished later that Saturday night: Above and below.    photos by Stan Deatherage

For me, I became imprisoned within my neighborhood of Mac'swood due to trees - mostly white oaks - falling to span every road of egress in multiple locations by 12:30 pm this blustery Saturday. There was no thought of travel, due to the blocked egress, of this neighborhood's every road for another 30 hours hence. 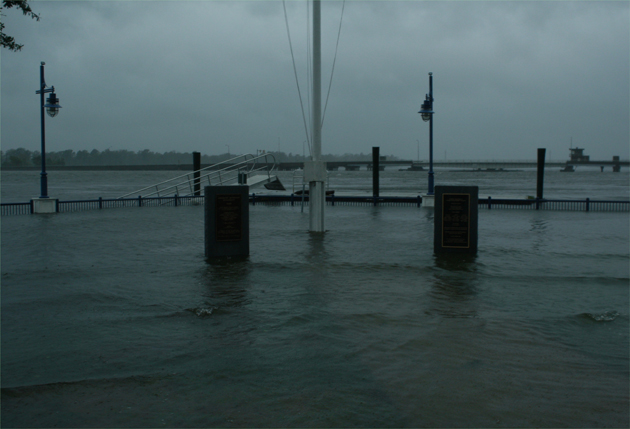 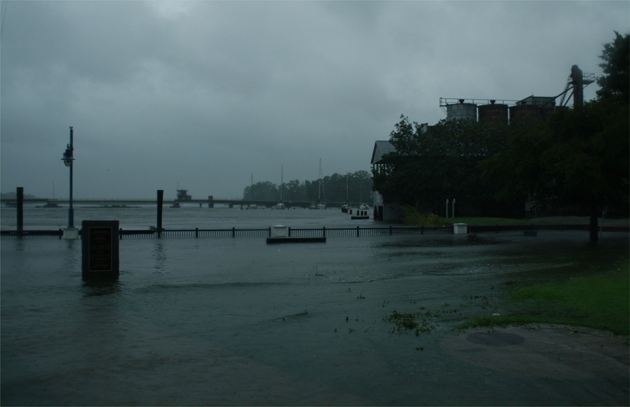 Additional picture that should enhance the flavor of the raw, windy morning along Washington's waterfront: Above and below.     photos by Stan Deatherage 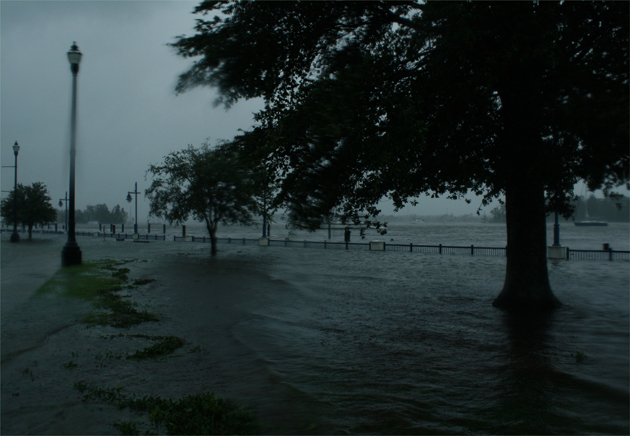 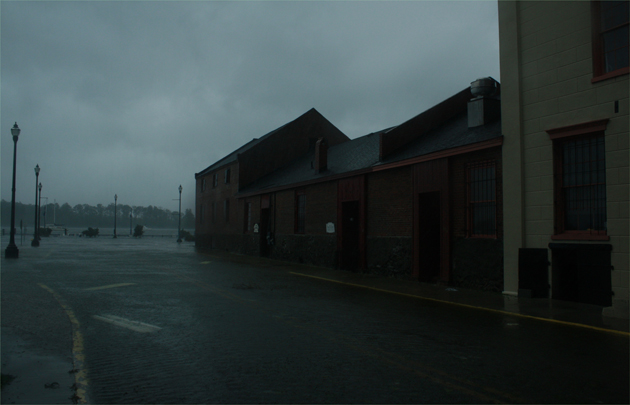 It was a tough time in a tough town for humans and fowl alike: Above and below.     photos by Stan Deatherage 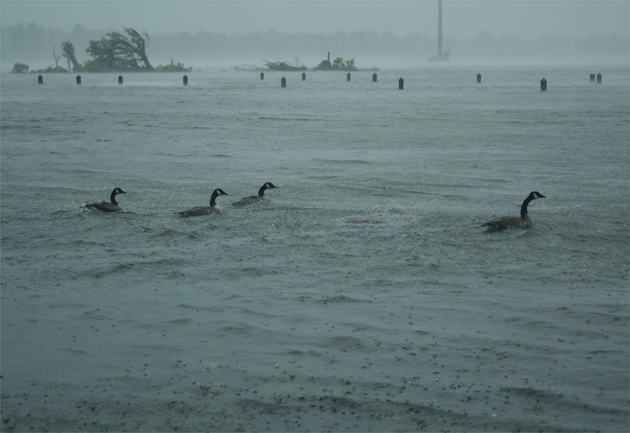