Dueling Hits - Marty Robbins (1925-1982) | Beaufort County Now | Singer, songwriter, NASCAR Racecar driver, and generally a hell raiser, he could have been a hero if would have just calmed down | Marty Robbins, Dueling Hits

Login to Send a Private Message to Bobby Tony
The tease line about Marty calming down was just that. A tease. He was 57 years old when he died in 1982. Robbins was survived by his wife, Marizona; the pair had been married since 1948 and had two children together. I don't know if he actually lived his songs, but songs and truth don't always have to be lived to be relevant. He was born in Glendale, Arizona, in 1925, Marty Robbins was an iconic country and western singer. He taught himself how to play guitar while serving in the U.S. Navy during World War II. (2)

With one or two possible exceptions, I have never met a Navy guy who was not just a bit off center. That is not a slam against "swabbies". I guess it is those long lonely days on a ship with no women or willing men that causes that. Fortunately, the new Navy has solved that problem. In the Navy.

My first memory of Marty Robbins was 1957 when "White Sport Coat" became a hit. I do not think I knew who sang it at the time since I was only 12 years old but the idea of White Coat and Pink Carnations and girls struck the dreams of that pre-teen boy.


I cannot claim any personal knowledge of the next hit that I remember. It was something about El Paso and fooling with someone else's woman.


He may have redeemed himself with two of his later recordings. First about a wife who may have helped him grow up.


Second about a man losing his wife and telling the Lord how hard that would be.


Lord you gave me a mountain


His final Top 10 single was "Honkytonk Man" in 1982, which is the title of the film Robbins had starred in with Clint Eastwood. However, he died shortly before the release of the film.(1) In the movie Clint sang part of the song and Marty finished it off since Clint's character suffered from tuberculosis (Honkytonk Man- the movie)   Here is his version of the song, which sounds similar to a friend of mine who shall remain nameless.


Here is an example of the type of character he was as well as his real character. He was an avid race car driver and usually self-funded most of his cars. From 1968 until 1985 he raced in thirty-five (35) races, never won, one top 5 and 6 top ten finishes. He did it for the fun and not the money but he was a competitive guy. He was determined to race with the leaders so he devised a plan. Here is the story:

Robbins' performance at Talladega that May day in 1972 was amazing. Turning laps more than 15mph faster than which he had qualified with, he was on a tear. It seemed he could run anywhere he wanted during the race, often jockeying with race leaders and climbing as high as fourth place before eventually losing steam and dropping back in the pack where he finished in 18th place. Despite finishing back in the pack, his performance was so good, that NASCAR determined that he warranted the "Rookie of the Race" award. Robbins, however, knew he could not accept the award.

Like the men he sang about Marty Robbins was an honest man and he knew what had to be done. After the race he drove straight to the impound area and told race officials to check his car. Sure enough, he was running a modified carburetor and Robbins' finish in the race was voided. He was moved to the back of the pack, receiving just $745 for a 50th place finish and a fine of $250 for his antics. Later, Robbins told people, "I just wanted to see what it was like to run up front for once." He was cheating. 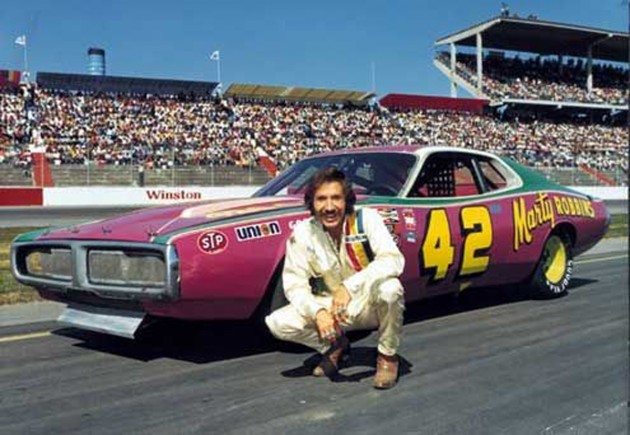