Katie Couric Releases a Hit Piece on Gun Violence: She Uses the Progressive's Arguments and their Tactics | Beaufort County Now | Katie Couric recently released a documentary on gun violence, entitled: "Under the Gun." Gun rights activists, including the NRA and Grass Roots North Carolina, are enraged over her deceptive editing .

Katie Couric Releases a Hit Piece on Gun Violence: She Uses the Progressive's Arguments and their Tactics 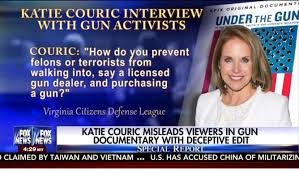 Katie Couric recently released a documentary on gun violence, entitled: "Under the Gun." Gun rights activists, including the NRA and Grassroots North Carolina, are enraged over the deceptive editing that Couric oversaw in the making of this hit piece. They are calling for a boycott and asking that anyone who is also outraged to voice their opinion.

With respect to the hit piece that Katie Couric did regarding gun violence, I am just as outraged as those mentioned above. But what do you expect from the media? They've abandoned their constitutionally-protected role in our society - which is to provide us with facts and truths (to introduce facts and truths "into the marketplace of ideas") - in order that citizens can control government, put the best servants in office, and voice their opinions in political matters. Instead, they have elevated themselves to a either a fourth branch of government - pushing for policy for their backers - or to the propaganda arm of the progressive movement. People are sheep and the media is the shepherd. The media merely serves as loudspeakers - to amplify the views of our corrupt government.

So here is what I think about the media's support of gun control: Throughout history, the first individuals to suffer when the government has control over guns and gun ownership and hence total control over the rights of the people are members of the media. When the government wants to advance its agenda (think back to John Adams with the Sedition Act, Abraham Lincoln with his hundreds of seizures and court martials, Lenin, Hitler, Stalin, etc etc (you see the trend), the first thing it does is come for the newspaper owners, publishers, editors, journalists, radio show personalities - those who reach an audience. It imprisons them, confiscates their office and instrumentalities, and sometimes sentences them to death.

Perhaps it is this happy thought that we can console ourselves with every time some piss-ant, two-bit, unethical journalist like Katie Couric publishes a ridiculous biased piece lacking in facts and journalistic integrity. 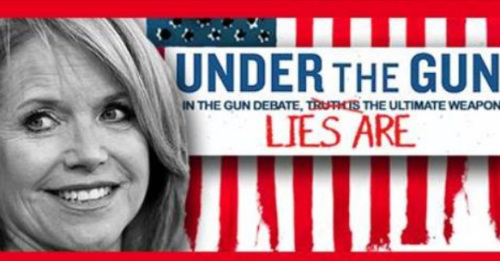