My final thought on this issue. Why would anyone want an AR15 or any of the so-called Assault Weapons? | Beaufort County Now | If you want to know the difference between an assault weapon or military grade weapon, move on this article will not interest you. But this is not a primer on gun technology or nomenclature but on 2nd amendment rights and other rights that may be in jeopardy in the future

My final thought on this issue. Why would anyone want an AR15 or any of the so-called Assault Weapons?

Login to Send a Private Message to Bobby Tony
If you want to know the difference between an assault weapon or military grade weapon, move on this article will not interest you. This is not a primer on gun technology or nomenclature but on 2nd amendment rights and other rights that may be in jeopardy in the future.

As long as the Democrats can keep the focus on guns instead of rights they can illicit the emotional response to the shooting in Orlando. Using an icon of the civil rights movement along with the tactics of that movement, which was for an honorable cause, is designed not to reach consensus but to gin up an emotional over reaction to the issue at hand. In the name of tolerance and diversity, they are attempting to subvert the will of the majority of the congress. Having failed to reach a majority in the congress they are now using the techniques of the 1960's to ramp up the emotion to a level where rational thought make no difference.

Almost all boxing, wrestling, track and field events follow a set of rules to assure some sense of equality in the rules but not the outcome. A street fight or domestic riot does not follow those rules.

I am not paranoid about the danger of someone lurking over my yard or trying to break into my house. I accept it as a possibility but I do not obsess over it. I try not to put myself into situations that have a high probability of criminal intent. I have had several civilian instances in my past where the danger was present and the possession of a gun helped to eliminate the danger. (Why I don't carry a gun anymore), but in 70 years there were few and far between in spite of the fact that I did not often use common sense.

I believe that some of our gun carry laws are increasable naive and inadequate. An example is right here in Georgia where the requirement for a Concealed Carry permit does not require any training or certificate of completion of safety or education course.(Appling for a Georgia Concealed Carry permit Government site). Almost anyone who has a clean record can obtain a carry permit in the State of Georgia.

This is somewhat disconcerting to me that a person who has very little familiarity with a firearm can obtain and carry a weapon that they may not know how to disassemble or properly fire and use that firearm. I am more afraid of some paranoid untrained citizen carrying a concealed gun that I am of a criminal. In Georgia there is no requirement to demonstrate adeptness in firearm control. I think that every permit be based on a course of training that covers laws, firearm safty, proper gun technique as well as firing range experience with a minimum number of rounds fired to demonstrate proficiency. I am not referring to accuracy of fire but the basics of handling and using a weapon.

At the very least, the issuance of a carry permit should be somewhat the same as a driver's license. There should be some demonstration that the individual knows the very basics. Please do not interpret this as a requirement to own a gun or have a gun in your house or car. It is merely a plea that those who actively carry a gun on their person have some education and training.

I am fully aware that I may be on the backside of the slippery slope but hopefully, I have anchored a safety rope to pull me back up should I slide into steep side of poor logic.

Now here is my position on the question asked in the title of this article. I don't need to justify having an AR15 or similar weapon for hunting, or any other smokescreen issue. If I choose to own one for self-protection in case of a domestic disturbance or internal revolt, that is all the reason I should legally need. It is clear to me that a complete ban on these weapons would be unenforceable and merely disarm the law-abiding citizens of a means of equal self-protection.

France has recently been in the news with the discovery of real military style assault weapons (read automatic fire) being stored in Mosques. New York just this month intercepted a van transporting guns into the city, which is clearly a violation of NY gun laws. I do not own an AR15 type weapon, nor do I want one. I do however believe that having adequate firepower in case of an insurrection is fundamental to the 2nd amendment. (do your own research, no cites here)

However it seems only common sense that in the rare case of a mass shooting incident or insurrection the use of suppressive fire is warranted. In military parlance, suppressive fire (commonly called covering fire) is "fire that degrades the performance of an enemy force below the level needed to fulfill its mission. Suppression is usually only effective for the duration of the fire". Or better put in grunt terms " Getting there firstest with the mostest."

The sports analogy above applied to my thinking about the choice of weapons. If I were at the plate in a baseball game in the last of the ninth with based loaded and two outs, I would want to have a bat designed to current baseball standards in hopes that I could win the game with a hit.

As much as I hate memes on the internet and emails, I must admit that I am finally coming around to their use. Based on my experience with most of my liberal acquaintances, I found that is the only superficial facts that they enjoy using. Accordingly, I offer this one for your consideration: 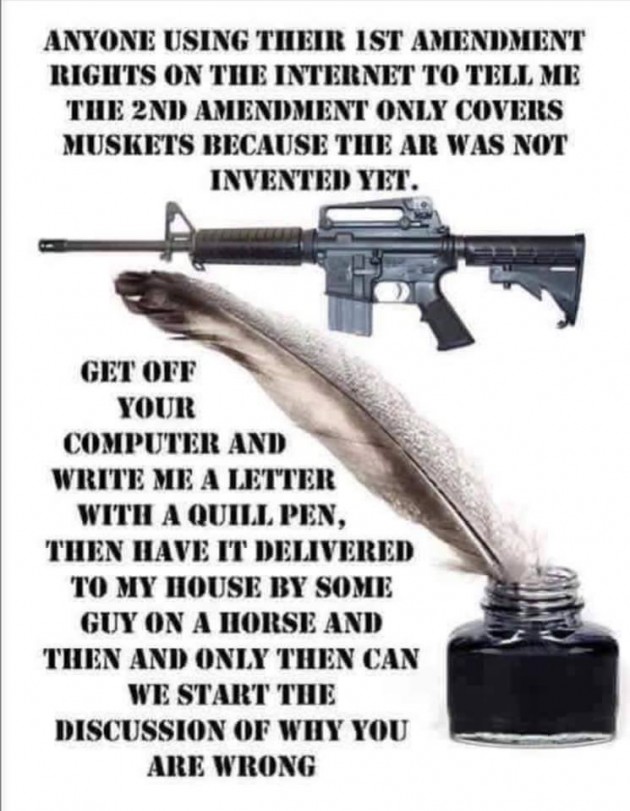 I am convinced that the answer to our terrorist problem is well beyond the debates of weapons. The solution may lie in the use of modern techniques of infiltration and intelligence gathering along with eliminating of safe havens in America and the world for the would be terrorist.

There was a time when I had confidence in my government to have policies, procedures and plans in place to interdict, locate and eradicate possible terrorist. I assumed that those were in place it I did not need to know. Unfortunately, I no longer have that confidence. That is not because we don't have the ability to do so but because we don't have the will to do so as evidenced by our current POTUS.

All governments are prone to excess of authority and all sides of the ideological debate have and will continue to use the abusive tactics to control the populace. Even many conservatives fall into the trap with their memes about people having to pass a drug test to collect welfare, or the infamous poll tax used in the South in past times.

"Due Process" is the foundation of our country. Before the government can deny us our rights, they must prove in our legal or court system that we are in noncompliance with the law or at least harbor evil intentions. That is subject to equal treatment and adequate defense. Then and only then can they incarcerate or deny us of those rights. Sometimes it is not more than a judge signing a warrant or a probable cause search, but it is none the less an arguable defense that proper procedures were not used in the obtaining of evidence and prosecution. Arbitrarily spending rights without due process is ass backwards and wrong.

Now if our modern society is too complicated for the simple delineated rights and procedures of the Constitution of the United States, we have a prescribed course for correction the errors or blunders of those old white men who formed this country. We have done this with the amendment process, which by their nature require consensus and thoughtful deliberation. No fiat decision by a single executive be it a he or she, Democrat or Republican, should change the fundamental right to redress the grievances of our citizens within the legal system.

This is probably the first time in my adult life that I have developed the passion towards an election, because I had that naive confidence in our system of checks and balances. I no longer have that confidence and that is alarming to me.

I have bored the hell out of myself and no doubt the reader with this entire episode in the sanctity of fundamental American rights. This whole series is nothing more than a effort to clarify in my mind the foundation for all our guaranteed rights. If the logic is flawed or the passion is misplaced, I plead guilty of misdirected concern about an abusive overreach of authority. Maybe it is time to take a deep breath and let the summer break to begin.
Go Back