Earlier in the week, outside of the Legislative Building, a joint announcement revealing farmland preservation funding around North Carolina's military bases was illuminated by Agriculture Commissioner Steve Troxler, partners at the United States Department of Defense, the North Carolina Wildlife Resources Commission, and the USDA Natural Resources Conservation Service. In 2016, the federal government designated 33 counties as the Eastern North Carolina Sentinel Landscape Partnership. The $9.2 million grant was awarded through a biennial competition known as the REPI Challenge, which is operated by the Department of Defense's Readiness and Environmental Protection Integration Program.

The United States Air Force will leverage $3.4 million of the REPI Challenge award with contributions from the North Carolina Agricultural Development and Farmland Preservation Trust Fund to protect more than 5,600 acres of high priority land necessary to maintain viable training airspace for Dare County Bombing Range. Potential barriers to mission training and flight paths include renewable energy compatibility and spectrum encroachment. Dare County Bombing Range is the primary training range for F-15E aircraft crews from Seymour Johnson Air Force Base and the primary backyard range for F/A-18 squadrons operating out of Naval Air Station Oceana. The range is an electronic combat, day-night, and air-to-ground training site critical to multiple installations and Army and Navy special operations teams (including SEALs). Section 3.19 of Senate Bill 131(Regulatory Reform Act of 2016-2017), legislation that I sponsored, which was signed into law by the Governor yesterday, establishes the North Carolina Sentinel Landscape Commission and will be chaired by Agriculture Commissioner Steve Troxler. The Commission will continue efforts of acquiring federal funds for preserving critical buffers around military footprints as well as strengthening the economies of farms, ranches, and forests. 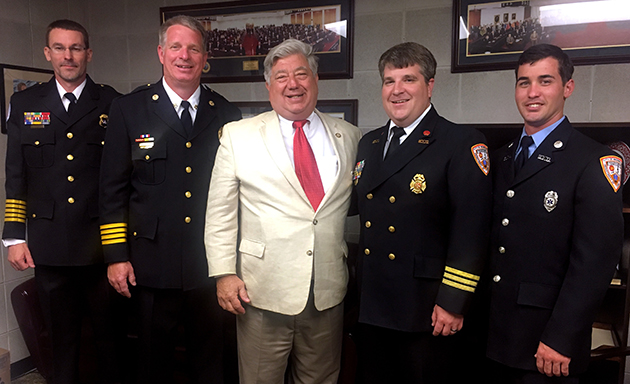 I enjoyed meeting with Firefighters from Elizabeth City and Washington yesterday. Fighting fires is one of the most hazardous professions, requiring physical strength, stamina, extensive training, courage, and selfless concern for the welfare of others.


Here in North Carolina - our state has a unique brand reputation for building high-quality, custom sport fishing vessels, tested in the rough waters of the world-famous sport fishing grounds off the Outer Banks. This bill that I sponsored with Senator Jerry Tillman will clarify and simplify the collection and remittance of sales tax process for boat and jet manufacturers. Senate Bill 552 (Modify Sales Tax Remittance: Boat/Jet Repairs) passed the Senate last week unanimously. The boat building industry in North Carolina has grown rapidly since 1990. Coastal boat builders use our coastal waterways, inlets, and offshore ocean areas to test new boat designs and demonstrate vessel capabilities to potential customers. The total economic impact of the boat building industry among our eight Atlantic coastal counties is approximate $327 million, providing nearly a combined $30 million of local, state and federal taxes.

North Carolina Ranks First in the Nation for Business Competitiveness


North Carolina ranks first in the nation on a closely watched measurement of state business competitiveness. Site Selection magazine's 2017 Prosperity Cup is awarded based on ten factors of economic performance, including the total number of new and expanded facilities in the state, capital investment and the total number of new jobs created. This ranking confirms once again that North Carolina is an outstanding place to do business. Our state offers companies the competitive factors they need to be successful. In another positive sign announced today, North Carolina's revenue surplus increased to $580.6 million. Make no mistake - the surplus is driven by reforms to our tax, regulatory and service-delivery climate, thus, securing more people working and earning more in our state. The unemployment rate fell in 98 of North Carolina's 100 counties in March 2017 and remained the same in one, according to county and area employment figures released this week by the N.C. Department of Commerce.


Last week, the Senate passed legislation that would create penalties for local governments, law enforcement agencies and public universities that act as 'sanctuary cities' and 'sanctuary universities' by defying federal and state laws against illegal immigration.

In 2015, the General Assembly passed a law to prevent counties and cities from enacting ordinances that violate or ignore federal immigration laws. But since the law went into effect, several law enforcement officials have contacted legislators to blow the whistle that some local governments are not complying with the law. And in recent months, officials in the cities of Winston-Salem and Charlotte have made public statements casting doubt on their willingness to abide by the law. Thus, Senator Norman Sanderson filed legislation which I co-sponsored to:


While we welcome those who come to our state legally, it is alarming some illegal aliens are "demanding" that government officials ignore laws that keep our citizens safe - even going so far as to say we should decriminalize so-called 'minor' offenses such as driving under the influence of alcohol. It is equally disturbing that some local officials wish to roll out the welcome mat to these illegal aliens and ignore federal and state laws. We shouldn't have to pass a bill to incentivize officials to follow the law, but hopefully, this legislation will finally get them to do the right thing.