The N.C. Utilities Commission approved a massive Beaufort County solar project in October after the developer relocated the portion of the project that would have surrounded the Terra Ceia Christian School.

When plans for the solar project became public in March, the developer had already secured leases on the parcels it planned to use for the project. Several area residents and school supporters spoke loudly in opposition to the project after they realized it would surround the small school in the heart of the Terra Ceia community.

The school, founded in 1937, sits on 3 acres at Christian School and Terra Ceia roads east of Washington and near the community of Pantego. It provides a Christian-based education for pre-kindergarten through 12th grade and has about 125 students from Beaufort and three adjoining counties.

Wilkinson Solar will build the solar facility. It's a subsidiary of Chicago-based Invenergy, an international renewable energy developer. Plans call for a 74-megawatt solar electric generating plant that will take up 600 acres. It will be the largest solar array in North Carolina, with 288,120 solar panels rising six to 10 feet above the ground.

Invenergy has built one other solar project in North Carolina - the 20-megawatt Morgan's Corner facility near Elizabeth City, completed in 2015. In 2011, Invenergy tried to build a wind energy facility in the same general area of Beaufort County near Terra Ceia. 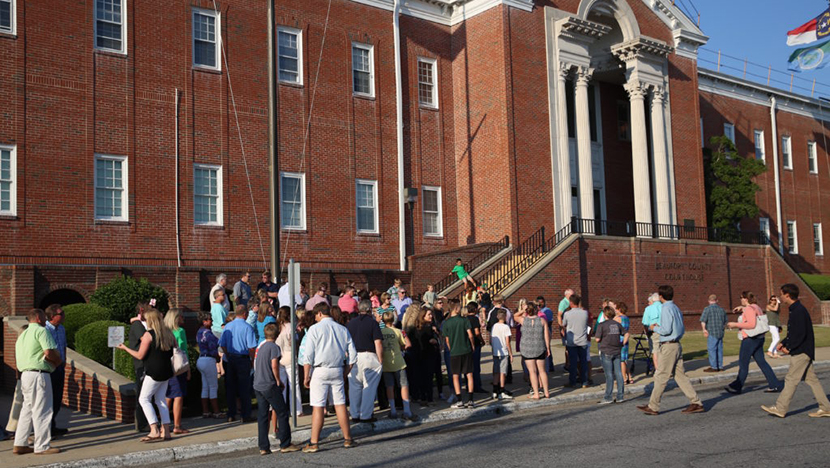 Residents of the Terra Ceia community line up outside the Beaufort County Courthouse in May to protest a solar facility slated at the time to go near the historic Christian school. (CJ photo by Don Carrington)

In May, a three-member Utilities Commission panel held hearings and took testimony from opponents and the developer. After those hearings, panel chairwoman Commissioner ToNola Brown-Bland said she agreed Terra Ceia Christian School is an important part of the community and urged Wilkinson Solar and school supporters to come together and coexist.

On Oct. 9, seven months after it made the initial request, Wilkinson amended its application with a new site layout. While the project is still in the Terra Ceia community, the closest solar panels will be about 1,400 feet from the school property.

The commission Oct. 11 issued its formal permission, called a Certificate of Public Convenience and Necessity, for Wilkinson to build the solar facility. Wilkinson officials have said the project won't proceed until it finds a buyer for the electricity.
Go Back