Reasons to Vote for Frank Palombo

Early voting is now underway. During the next two weeks, please allow me to share with you some of the best reasons to cast your vote for Frank Palombo for Congress. Below you will find two more great reasons to vote for Frank. Please share these reasons with your friends, family and co-workers and encourage them to vote early.

Thank you for your support.

Frank is a strong believer in our founding fathers' vision of citizen legislators. As his first official act, he will co-sponsor one of the House bills for a Constitutional Amendment for term limits. Frank has signed the U.S. Term Limits pledge. Frank has vowed to serve no more than three terms in the House of Representatives and he will not take a congressional pension or other retirement benefit not available to all Americans. His opponent ran on term limits in 1994 and signed the Contract with America which promised that legislators would serve no more than 6 terms. His opponent is seeking his 10th term in office. His opponent also receives a pension and benefits from both his time in the North Carolina General Assembly and his time in Congress.

Frank will vote to repeal Obamacare and will work to reign in the federal government and their ever-expanding role in our lives. Frank will work to dramatically devolve decision making and spending from the federal government to state and local governments, where it belongs. His opponent voted to fund programs like Cash for Clunkers and voted to give Amtrak another $10 Billion. His opponent voted for more funding for solar energy research and gave the EPA the power to ban the incandescent light bulb. His opponent's support for Barney Frank's Wall Street Reform bill spawned hundreds of new regulations and 13 new bureaucratic agencies that will cost the taxpayers billions. 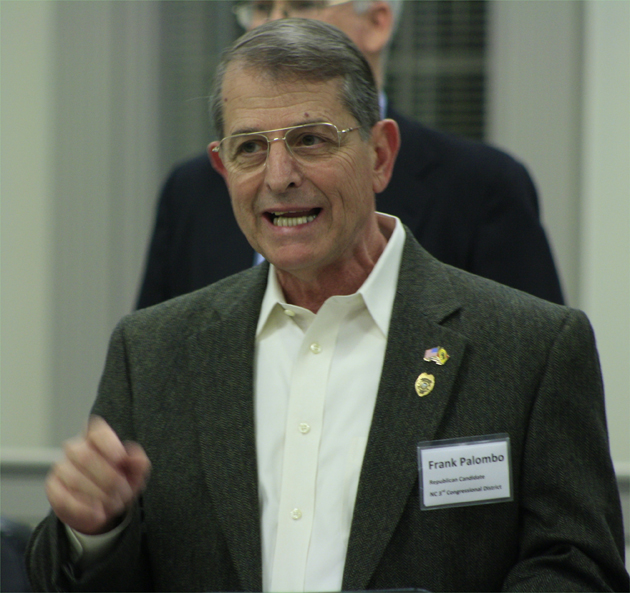 Frank Palombo making an emphatic point to Republicans at their county convention: Above.     photo by Stan Deatherage


Frank supports Paul Ryan's recent Republican budget. Frank also supported last year's Cut, Cap and Balance bill. Frank believes that getting our fiscal house in order must be priority number one. We can no longer afford to kick the can down the road. Recent Republican efforts to reign in spending, reform entitlements and balance the budget are a good start. His opponent has voted against all leading Republican efforts to put our economy back on track. His opponent voted NO on Paul Ryan's budget two years in a row and he voted against Cut, Cap & Balance.


Unlike his opponent who voted against offshore drilling and for keeping President Obama's moratorium on offshore drilling in place, Frank believes we need to get the government out of the way of domestic energy production. Frank supports expediting the permitting process for energy exploration throughout the United States, including offshore drilling, building refineries, and moving nuclear power technology into the 21st century.