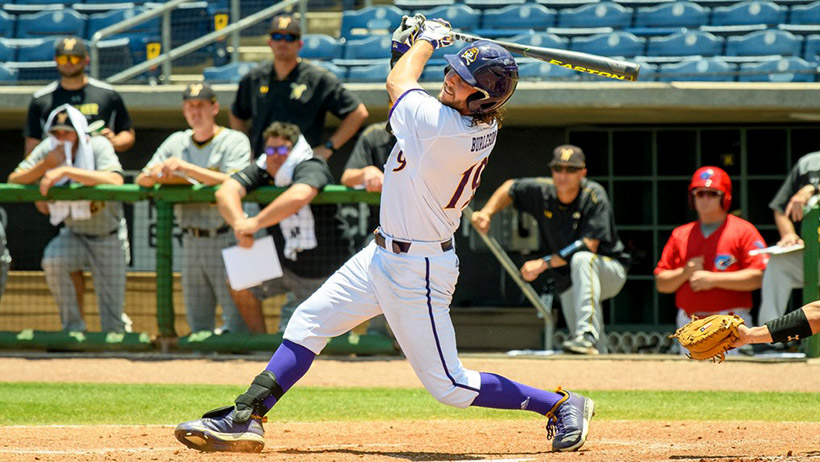 Burleson, who was named to five All-America squads in 2019, is regarded as one of the top two-way players in the country after being named a finalist for the 2019 John Olerud National Player-of-the-Year Award. The Denver, N.C. native led the Pirates outright in eight offensive categories including batting average (.370), doubles (23), hits (91), RBI (61) and multi-hit games (23), while sharing the team lead in multi-RBI contests (16) and fielding percentage (1.000). He slugged at a .573 clip to stand second on the club and belted nine homers to rank third.

On the mound, he appeared in 24 games making nine starts where he owned a 6-2 ledger with five saves and a 3.28 ERA. Burleson earned his 11th career win against Campbell in an elimination game on June 3 in the 2019 Greenville Regional after working five innings. He fanned 68 batters while walking 26 and struck out a career-high 10 batters against Monmouth on Feb. 23. The lefty allowed 22 runs (all earned) on 56 hits in 60.1 innings and held opposing hitters to a composite .246 average. In the classroom, he is a six-time ECU Director of Athletic Honor member, a 2018 AAC All-Academic selection and was a 2019 Third-Team Google Cloud Academic All-American who boasts a 3.959 cumulative GPA as a business management major.

During the summer, Burleson played for the USA Collegiate National Team helping the Red, White and Blue to an 8-6 overall record which included series wins over Chinese Taipei and Cuba. He appeared in eight games making four starts in the field where he batted .267 (4-for-15) with a home run and three RBI. His lone home run, a solo walk-off blast in the bottom of the ninth, lifted USA to a 3-2 victory over Japan. On the mound, he sported a 2.53 ERA in three outings striking out eight in 10.2 innings.